I can't say I wasn't warned. Alarms started clanging the day I signed to write His Way: The Unauthorized Biography of Frank Sinatra (Bantam Books, 1986).

Some friends urged me to buy life insurance and make them the beneficiaries; others recommended bodyguards and a bulletproof vest. The rumors of Frank Sinatra's violence and his ties to organized crime were such that journalists joked in print about me ending up in concrete boots and sleeping with the fishes if I proceeded to write his biography. Milton Berle joshed at the Friars Club, "Kitty Kelley wanted to be here tonight but an hour ago she tried to start her car."

The laughs stopped when I received a message on my answering machine: "Soy-ving by Oy-ving here. Call ASAP 'cuz we gotta soyve ya."

I figured it was a New Jersey caterer who had the wrong number. Turns out it was a process server named Irving in the subpoena business of serving.

"Serving by Irving" was no joke. Frank Sinatra was suing me before I had written a word. In fact, the book was five years away from publication, but Sinatra wanted to make sure it would never be published. So he sued me (not my publisher) in Santa Monica, California, seeking $2 million in punitive damages, saying that he and he alone, or someone that he anointed, could write his life story. Anyone else would have to pay $2 million dollars for daring to undertake the enterprise.

Getting sued by one of the most powerful men in the country -- and one with mob connections -- gets your attention. Fortunately, a national coalition of writers groups rose up to protest, claiming that Sinatra's lawsuit against me was an assault upon all writers' constitutionally protected freedoms of expression and should be dismissed on its face. In a joint statement they said: "The apparent goal behind Sinatra's filing of this suit is to scare Ms. Kelley away from her investigation and, ultimately, to force her to scrap the book. Abuses of the judicial system such as these pose a serious threat to all writers."

For one year, Sinatra pursued his lawsuit, but his allegations proved groundless, and he finally was forced to drop his case.

The writers groups applauded his action. "The court's dismissal of this meritless suit -- at the request of Mr. Sinatra -- is a victory for all writers and the public," stated their press release. "It reaffirms the right of the public to be informed about the lives of influential public persons whether or not they approve of the writer and his or her approach."

The Baltimore Sun editorialized on the right to cover public figures without restriction:

If all the public can learn of the person is what the person himself wants it to learn, then our will become a very closed and ignorant society, unable to correct its ills, quite unlike what the drafters and subsequent generations of defenders of the free-speech First Amendment had in mind.

I continued my work, interviewing Sinatra's friends, employees, associates, former girlfriends and lovers, federal law enforcement agents, plus musicians, movie stars and mobsters like Moe Dalitz, who had known and worked with him over the years. I also interviewed a few Sinatra relatives, including his son, Frank Sinatra, Jr. Through my years of research I received regular calls from Liz Smith, former New York Daily News gossip columnist, with all sorts of Sinatra stories, mostly scurrilous. Yet a few weeks before publication, Sinatra decided to make amends with the woman he demeaned on stage as "a dumpy, fat, ugly broad," and referred to as "Lez" Smith. He invited her for drinks, she swooned, and Sinatra never had to read another negative word about himself in her columns.

My book was published in 1986 and enjoyed great success, selling more than one million copies in hardback -- a testament to the enduring fascination with Frank Sinatra. However, His Way was not applauded by the singer or his family, for the biography had opened doors that they had long kept locked.

Upon publication, Nancy and Tina Sinatra called reporters to denounce the book and its author. Their father railed on television about "pimps and prostitutes" who write "a lot of crap" for money. "We nearly strangled on our pain and anger," Nancy Sinatra said, reviling me as "the big C-word... I hate [Kitty Kelley]... If I ever met her, I don't know what I'd do... " She ranted for months on her website and was still ranting years later when she tried to jump-start her career at the age of 54 by posing nude for Playboy. "Don't ask me any questions about that goddamned Kitty Kelley or her goddamned book," she warned reporters.

Tina Sinatra claimed that my biography had made her father ill, causing him to undergo major colon surgery in 1986 for seven-and-a-half hours, and to endure a temporary colostomy. Tellingly, she waited until her father had died before she published her own book, which lacerated Barbara Sinatra, her father's wife of 22 years, as a grasping, gold-digging wench not worthy of the family name. To this day the women speak only through lawyers.

Now that His Way: The Unauthorized Biography of Frank Sinatra is being published in trade paperback, the alarms are once again clanging. "Take cover. Prepare for incoming," warned one friend via e-mail. "Ole Blue Eyes might be gone but his daughters still prowl the forest."

There is no longer any question about Frank Sinatra's ties to the Mafia. As if to tease those mob connections, Nancy and Frank Sinatra, Jr. each appeared in different episodes of HBO's The Sopranos. The producers of the hit series hung Frank Sinatra's mug shot in Tony Soprano's office at the Bada Bing. Yes, Ole Blue Eyes was once arrested on a morals charge and jailed for three days. (See pages 7-9 of His Way.) Movie directors continue to license his music as melodic striptease for their gangster films, and his picture inevitably appears in any film about the mafia.

My biography of Frank Sinatra is not paean to his music but rather an illumination of the man behind the music, who once described himself as "an 18-karat manic-depressive who lived a life of violent emotional contradictions with an over-acute capacity for sadness as well as happiness."

Taking the man at his word I rode the roller coaster, and now a new generation of readers can join me for the ride. 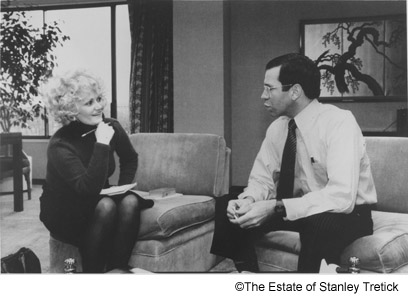 Photo: Kitty Kelley interviewing Frank Sinatra Jr. on January 15, 1983 in his suite at the Hyatt Regency Washington in Washington DC for His Way: The Unauthorized Biography of Frank Sinatra.