We at The Humane Society of the United States have focused much of our farm animal welfare reform efforts on combating intensive confinement and inhumane slaughter. Humane transportation is a major welfare issue, but so, too, is the genetic manipulation of animals and its implications for their health.

As part of a burst of deregulatory activity in the final days of the Bush administration, the U.S. Food and Drug Administration proposed guidelines for the approval of genetically engineered farm animals for the American food supply. The HSUS's director of public health and animal agriculture, Michael Greger, M.D., published a paper last week in the prestigious Journal of Animal Science on the topic. I asked him to summarize the concerns he raised. 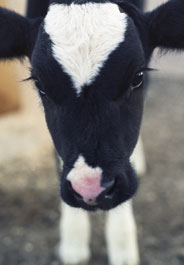 Imagine a world in which farm animals have been so genetically modified for rapid muscling that billions suffer in chronic pain from skeletal disorders that impair their ability to even walk. A world in which chickens with such explosive growth they have to be starved lest they risk cardiac rupture. "Double-muscled" calves born into the beef industry so freakishly huge that they can only be extracted via Caesarian section. A hen laying so many eggs that she risks a prolapse--laying her own uterus. A cow capable of generating ten times more milk than a calf could ever suckle. Imagine a world in which turkeys are so top-heavy they are physically incapable of mating.

Unfortunately, this seemingly sci-fi world is already our reality. All of these abominations exist today, products of conventional techniques of genetic manipulation, such as artificial selection and insemination, hormone-induced superovulation, and embryo splitting and transfer. Genetic engineering, the creation of transgenic farm animals whose genes have been modified through biotechnology, goes a step further, giving agribusiness an additional tool to stress animals to their biological limits at the expense of their health and welfare--and, potentially, ours as well.

Human health concerns, as reviewed this year in Critical Reviews in Food Science and Nutrition, have been largely limited to the potential for growth hormones from genetically engineered animals to accelerate human colon, breast, and prostate cancer. The physiological trade-off between productivity and immune function may pose a broader risk, however.

Genetic manipulation for accelerated muscle, milk, and egg production carries an inverse relationship with immune function, a trade-off that has been empirically demonstrated in chickens, pigs, and both beef and dairy cattle.

Before domestication, natural selection chose strong immune systems for survival. After domestication, though, artificial selection concentrated on improvement of production traits with less attention to resistance to disease, resulting in survival of the fattest, rather than the fittest. The reason this may pose a human health hazard is that three-quarters of all emerging human infectious diseases have come from animals. Whether it's mad cow, bird flu, swine flu, Nipah virus, Strep suis, or poultry- and aquaculture-related foodborne disease, how we breed and raise animals can have global public health implications. 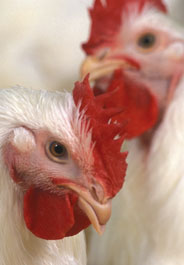 Because animal agribusiness prioritizes extreme productivity there are epidemics of so-called "production diseases" among many farmed animal species. Cows have been made into such milk machines, mastitis (udder infections) and lameness (as we documented in our dairy cow slaughter investigation) are the two leading causes of dairy cow mortality.

The skeletons of egg-laying hens are now so fragile given the amount of calcium needed to form so many egg shells that up to a third arrive at slaughter with freshly broken bones.

And chickens have been inflicted with such rapid muscling in the United States that 2.5 billion of them suffer every year in chronic pain from skeletal disorders that impair even their ability to walk. According to University of Bristol Emeritus Professor of Clinical Veterinary Science John Webster, this chronic pain experienced by our freakishly heavy modern day chickens and turkeys "must constitute in both magnitude and severity, the single most severe, systematic example of man's inhumanity to another sentient animal."

This post originally appeared on Pacelle's blog, A Humane Nation.