Franklin Graham, a prominent evangelical supporter of President Donald Trump, is calling for Christians across the country to set aside this Sunday as a “special day of prayer” for the president.

Graham, son of the famous American evangelist Billy Graham, told his substantial Facebook following over the weekend that this is a “critical time” for the country ― and for Trump.

“President Trump’s enemies continue to try everything to destroy him, his family, and the presidency,” Graham wrote. “In the history of our country, no president has been attacked as he has. I believe the only hope for him, and this nation, is God.”

About 250 Christian leaders affirmed Graham’s call to prayer, signing a statement in support on the Billy Graham Evangelistic Association’s website.

The signatories included a wide array of voices on the religious right ― including Jerry Falwell, Jr., president of Virginia’s Liberty University, the televangelist Paula White-Cain, who heads Trump’s evangelical advisory board,  and other prominent evangelicals who serve as advisers to the president.

In his Facebook post, Graham took note of a scripture verse that calls on Christians to pray for “kings” and all those in authority. He asked pastors to lead their congregations in praying for the president this Sunday.

“We’re on the edge of a precipice. Time is short. We need to pray for God to intervene. We need to ask God to protect, strengthen, encourage, and guide the President,” Graham wrote.

The theory that Trump was handpicked by God to lead America and defend its Christian heritage is embraced by some in evangelical circles. Graham himself has claimed that Trump won the 2016 presidential election because “God showed up.”

Graham is currently touring cities in the Northeast, holding one-night prayer and evangelical gatherings meant to encourage people to “return to the Biblical faith of our fathers.”

The preacher, who participated in Trump’s inauguration by offering a prayer, was a frequent critic of past presidents. During Barack Obama’s White House tenure, Graham helped fan the “birther” conspiracy, which falsely claimed Obama was not an American citizen. He also publicly questioned whether Obama was really a Christian.

During Bill Clinton’s presidency, Graham criticized his sexual misconduct, insisting that if Clinton committed an immoral act in private, he couldn’t be trusted to behave ethically in public.

Brian McLaren, a progressive Christian author and speaker, told HuffPost he believes Graham and other leaders on the religious right are “following the script of religious leaders through the centuries who have sided with those with wealth and power and seem shockingly (or willfully) blind to their bankrupt character and anti-democratic agendas.”

McLaren said he will also pray for the president on Sunday ― but with a different purpose in mind.

“That he will repent of his lies and turn from his arrogance and hostility, that he will stop denying the existential threat of climate change, that he will be held accountable for his corruption, and that he will either be impeached as soon as possible or voted out of office next year, for the good of our country and the good of the world.” 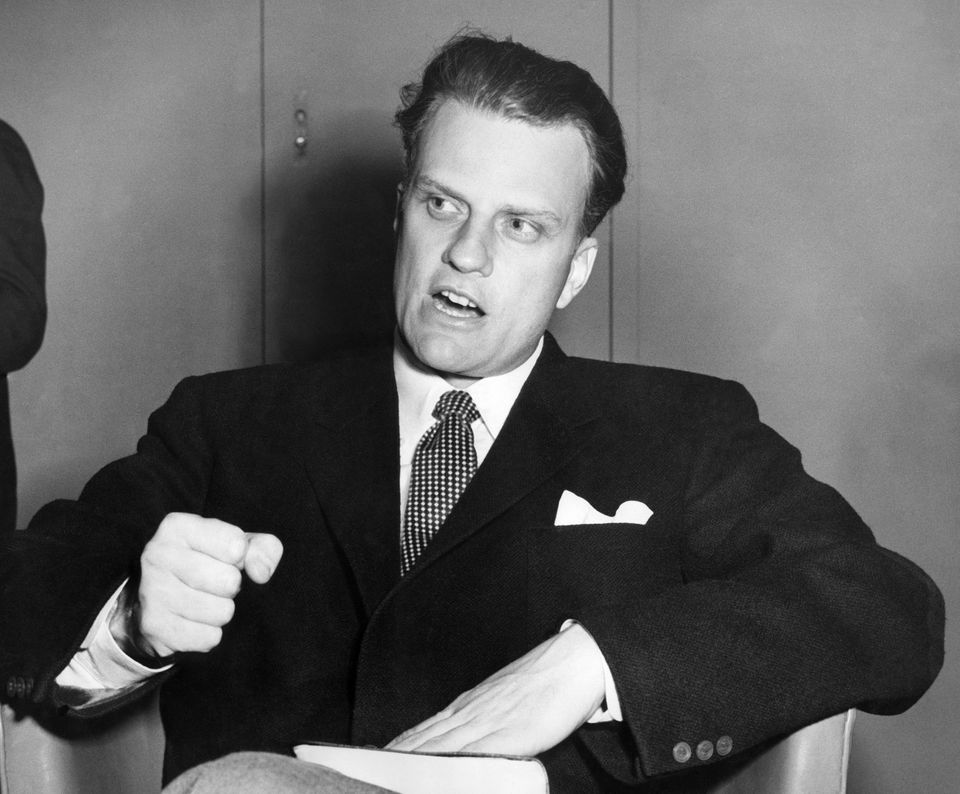 1 / 23
Remembering Billy Graham
SOUTHAMPTON, UNITED KINGDOM: Billy Graham, the American evangelist, the Bible beneath his hand, pounds his knee as he is interviewed aboard the liner 'United States' 26 February 1954 upon his arrival from New York to Southampton. Graham, (son of a dairy farmer, born in 1918 in Charlotte, NC), attended Florida Bible Institute and was ordained a Southern Baptist minister in 1939 and quickly gained a reputation as a preacher. During the 1950s he conducted a series of highly organized revivalist campaigns in the USA and UK, and later in South America, the USSR and Western Europe. (Photo credit should read AFP/Getty Images)
Getty Images