This piece has been crossposted from Freakonomics.com

The Portland Trail Blazers -- a team that won 48 games in 2010-11 and was only three games below .500 this season -- made two puzzling trades a couple of weeks ago. Gerald Wallace was sent to the New Jersey Nets for two injured players and a first round pick in the 2012 draft. And Marcus Camby was sent to the Houston Rockets for a second round pick and two players who had only played 158 minutes this year.

Camby and Wallace combined to produce more than 10 wins for the Blazers this season, and at the time of the trade their level of productivity led the team. Given what the Blazers received back, it seems likely the Blazers just got worse.

Henry Abbott -- of ESPN's TrueHoop (and devoted Blazers fan) -- made the following observations about these two moves:

One should note that Abbott is not alone in thinking that NBA teams will essentially give away the present in an effort to improve the team's position in the NBA draft. Joe Price, Brian Soebbing, Brad Humphreys and I published a paper in the Journal of Sports Economics in 2010 that offered evidence that NBA teams do "tank" towards the end of the season. That same paper also provided a reason for this behavior. Our research indicated that the very first pick in the draft -- who often is a very productive player (think Shaquille O'Neal, Tim Duncan, LeBron James, or Dwight Howard) was worth more in gate revenue than the second and third picks combined. In sum, winning the NBA lottery can really help a team. And you can't win the lottery if you're not in it. So that means you have to miss the playoffs (only non-playoff teams are in the NBA lottery).

Okay, but should a team give up on the present for a chance at one of those amazing number one picks? That suggests you need to sacrifice today to win tomorrow. But is this true?

To answer this question, we need to define what we mean by "excellent" and "pretty good." Since 1974, 79 percent of teams that won the NBA title won at least 55 regular season games. So it seems reasonable to define "excellent" as a team that wins 55 games. And "pretty good" has to be worse than "excellent," so we will say a "pretty good" team wins between 40 and 49 games. 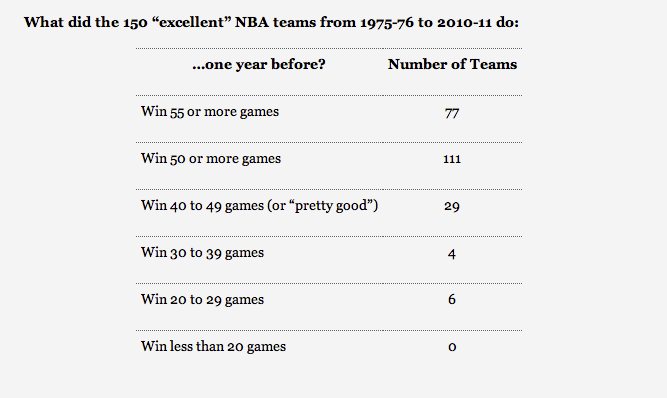 But of those teams that make the leap, what were they doing before the jump? Of those that weren't "excellent" or close to "excellent," the vast majority were "pretty good." Of the 39 teams that didn't win 50 or more games the year before they were "excellent," 29 won between 40 and 49 games. And none of these teams won fewer than 20 games.

Okay, maybe looking at just the season before isn't good enough. Perhaps it takes time to build an "excellent" team. So let's go back two years. 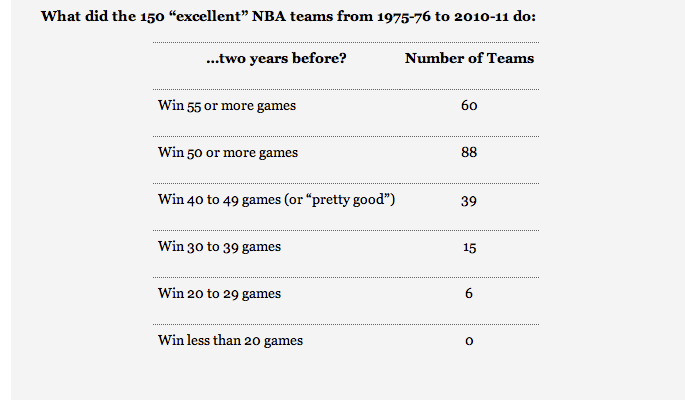 Once again, most "excellent" teams today were either "excellent" two years ago or fairly close. And once again, the next biggest group would be described as "pretty good." Furthermore, there were no teams that failed to win 20 games that managed to win at least 55 games two years later.

Maybe it takes more than two years to build a title contender. So let's go back three years. 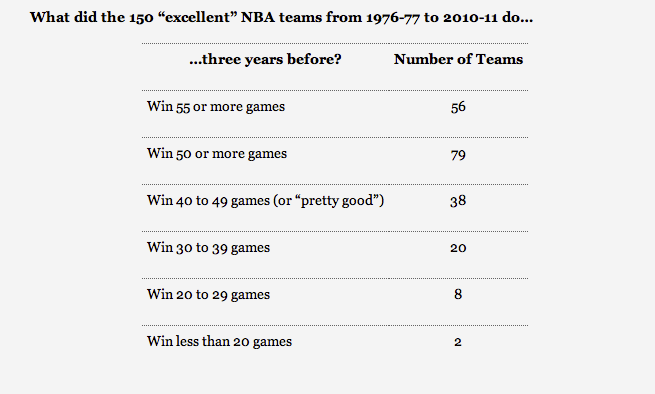 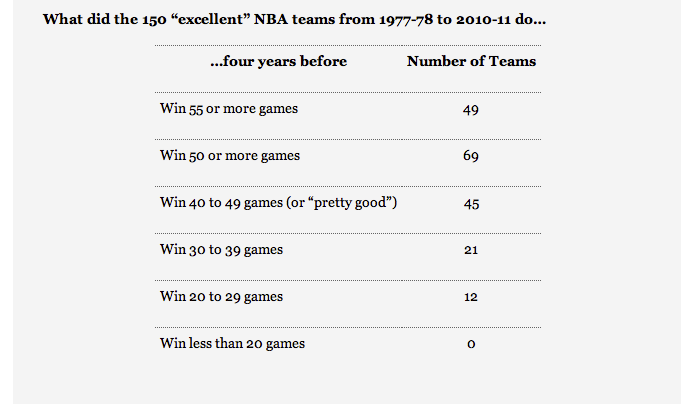 Now we don't see any teams making this leap. We still see that most teams that are excellent today were either "excellent," "close to excellent," or "pretty good" four years ago. And only 12 teams won between 20 to 29 games four years ago.

At this point it seems pretty clear that the numbers don't support the notion that the best way to be "excellent" is to be really bad today. In fact, it seems that most teams that make the leap to "excellent" were recently "pretty good."

There are some simple explanations for this result. First, teams need more than just one great player to be excellent. Chris Paul is a great example of this observation. Last season, Paul produced more wins than any other NBA player. But his team only won 46 games, so they were just "pretty good." That's because Paul produced as many wins (18.4 -- and here is how that is calculated) than the next three most productive New Orleans players combined (Emeka Okafor, David West, and Trevor Ariza combined to produce 18.4 wins). Everyone else on the roster (15 players), combined to produce fewer than 10 wins. In sum, as the Hornets have learned with Chris Paul now playing with the Clippers, New Orleans didn't have much talent after CP3.

So teams need more than just one great player. In addition, most productive players in the NBA are not number one draft picks. The following table reports the 40 most productive players in the NBA in 2010-11. These 40 players -- who are less than 10 percent of the population of players employed by the NBA last season -- produced more than 35 percent of the league's wins (most wins in the NBA are produced by a minority of the players). 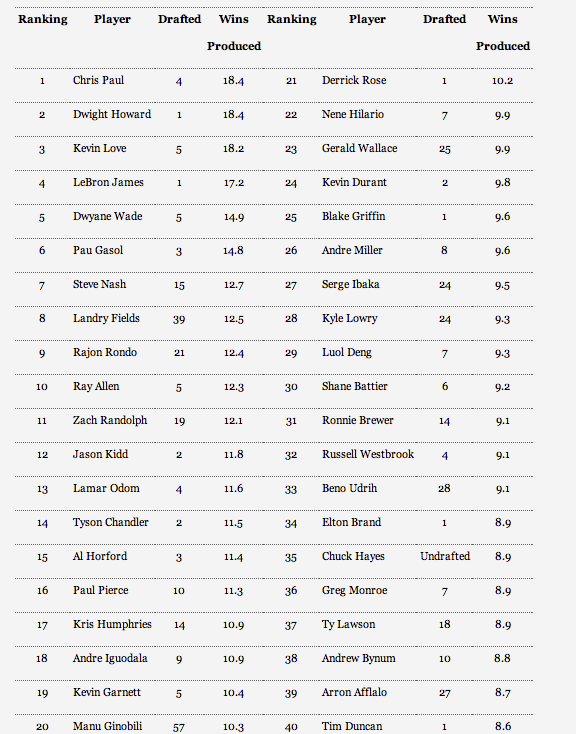 Where do we find these elites? As one can see, number one picks like Dwight Howard, LeBron James, Derrick Rose, Blake Griffin, Elton Brand and Tim Duncan make the list. But other number one picks like Kenyon Martin, Kwame Brown, Andrea Bargnani and John Wall are not to be found (and Michael Olowokandi, Yao Ming and Greg Oden -- players selected first after Duncan -- did not play last year). So the first pick -- while on average is quite good -- is not guaranteed to be "excellent."

In addition, 34 players on the above list were not taken with the first pick. And 16 players were taken 10th or lower. So, productive players aren't just found at the top of the draft. Furthermore, 18 of these players are not with the team they played with during their rookie season. That means teams can acquire top players someplace else in the draft.

All of this illustrates how teams find "excellence." The top pick in the draft is one place. But there are top players found elsewhere in the draft. And free agents and trades are also a place where one can find "excellent" players.

Of course, one can also find players in the draft and free agent market that don't help. In fact, since most players don't produce many wins, that is what you will primarily find.

This last point is very important when we look back at what the Blazers just did. Wallace produced 9.9 wins last year, a mark that ranked 23rd in the league. And in four of the proceeding five seasons, Wallace had also ranked in the top 25 in wins. So Wallace is "excellent." But rather than keep "excellent," Portland has sent this player to New Jersey in the hope of finding someone who is "excellent."

Now that might happen. But the draft is uncertain and it's also quite possible the Blazers will find someone who won't be "excellent."

But if you are close -- like the Blazers were -- your best bet is to find one or two more players that will get you into the promise land. Based on the data, giving away one of your most productive players for the hope of something better is simply not a very good strategy. And given what we see from the history of "excellent" teams, the Blazers -- if they are reduced to a team that is not good enough to win 40 games in 2012-13 -- are now that much further from finding excellence (and making Henry Abbott happy).