A high-powered New York Post columnist found himself in a major controversy on Monday after he called the Sandy Hook killings a "little convenient massacre."

Fredric Dicker, widely regarded as one of the most influential media voices in New York state politics, made the comment on his radio show Monday. He was speaking about gun control legislation passed by the state's governor, Andrew Cuomo.

"That was his anti-gun legislation, which he had promised not to do, but then he had a little convenient massacre that went on in Newtown, Conn., and all of a sudden there was an opportunity for him," Dicker said.

There was immediate backlash. Gun control groups demanded that Dicker apologize. In a statement to the Albany Times-Union, Dicker did not back down:

This group clearly doesn’t understand, or doesn’t want to understand, my point, which is a sarcastic reference to the governor latching on to an horrendous out of state mass killing to advance a political agenda that had nothing to do with the problem of gun-related crimes in New York. This is a charge that has been made for over a year now by many critics of the governor’s “Safe Act.” I used the word ”massacre” intentionally because it refers, by definition, to a horrendous large scale killing, which of course the Newtown horror was.

On Tuesday, though, the rival Daily News put Dicker right on its front page: 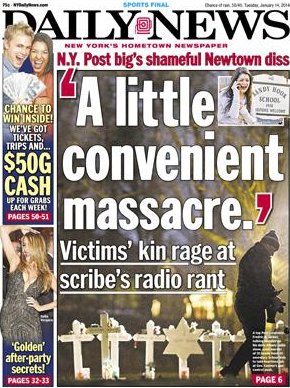