While many people will be celebrating the death of Phelps, whose name is synonymous with irrational hate and vitriol, I think that today the world lost someone who did a whole lot more for the LGBT community that we realize or understand.

I know because I have had to deal with the Phelps clan for over 15 years as an activist and countless times have talked with the media about the merits and faults of giving him and his band of hateful protesters any attention at all.

The turning point in how the LGBT community responded to Phelps came in 1999, as he organized a picket outside the Matthew Shepard trials. Phelps had previously protested the funeral and got the most attention he'd ever had until that point. It was appalling. Friends of Matt and community members wanted to not only respond to this protest but shield Matt's parents from the vicious images Phelps and his family brought with them from Kansas. As I stood feet away from Phelps, I saw a parade of a dozen or so angels -- dubbed "Angel Action" by Romaine Patterson and Jim Osborn, who came up with the idea -- turn the corner onto Grand St. and approach the Laramie County courthouse. All the cameras and reporters turned toward them, and I cried as I saw this brave group of people stride toward him with love and strength in their hearts. And that was what made the news -- not him but the amazing response.

Now, remember that only a short time prior, the response to Phelps was not as gracious. At gay journalist Randy Shilts' funeral (picketing funerals of people who'd died of AIDS was a regular shtick for Phelps in the '80s and early '90s), people threw eggs at the protestors and confronted them angrily. I can't blame them, but the truth is that with cameras rolling and the media loving conflict and controversy, the juxtaposition of Phelps' face with the angels surrounding him, turning their backs to him and singing "Amazing Grace" was an image that has impact far beyond the gut reaction of anger. We are better than he is. And the world needed to see that.

After the Angel Action snatched the media attention from Phelps and took the wind out of his sails, we began to see more and more creative and interesting responses to his protests, like the incredible "Phelps-a-thons," where local activists raised money for every minute he protested, and diverse faith leaders coming out more and more to counteract his message with one about God's love. As time went on and Phelps "diversified" and began protesting the funerals of veterans killed in the Middle East and even went so far as to call the Rev. Jerry Falwell a "fag-enabler," the diversity at counterprotests grew. And we joined hands and voices with new allies. I would see a spectrum of everyone from queer kids to biker vets to ministers all singing "Amazing Grace" or "This Little Light of Mine" and driving him and his flock up a wall.

The saddest thing to me is that over the years, I saw his grandchildren grow up. He would have small children holding signs that were grotesque, and as a parent I felt it was not only offensive but abusive. And while his daughter carries on the "family tradition," I am heartened to see that several family and church members have escaped and speak of the horror of being part of what was essentially a small cult. Nathan Phelps is now an advocate for LGBT rights, and one can hope that now others can break away and heal from what must be a horrifying and abusive situation in that family and in that church.

And as time has passed, the media pays less and less attention to them -- I watched a stream of cameras pass by Phelps protestors in Washington, D.C., around the time marriage equality was passed, and their lame attempts to protest The Laramie Project only prove the point of the play. This may well be the last hurrah for Phelps. Let's hope the media moves on now and focuses on the growing support in faith communities and denominations for LGBT rights, including those that have been less than supportive in the past. Judy Shepard has said many times, "We love Fred," because she understands that he has brought along allies who are horrified by the hate. So his legacy will be exactly the opposite of what he dreamed, and I think we should all take a moment to remember the lives of the people he has hurt and not waste a second dancing on his grave. I know I will take a moment to remember those angels turning the corner and think about how our community has turned an even bigger corner to create a world where that kind of hate no longer exists. 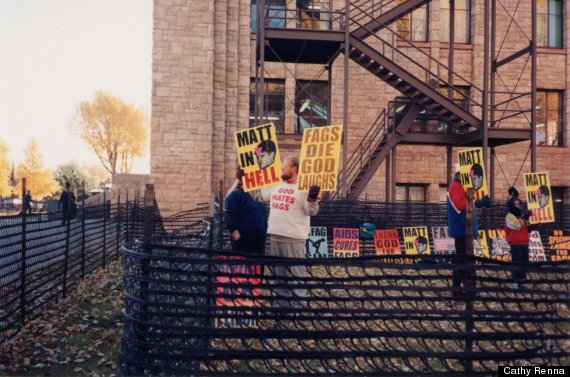 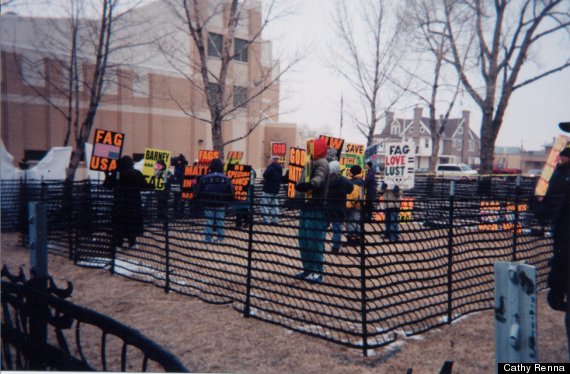 The Phelps clan in Laramie in 1999 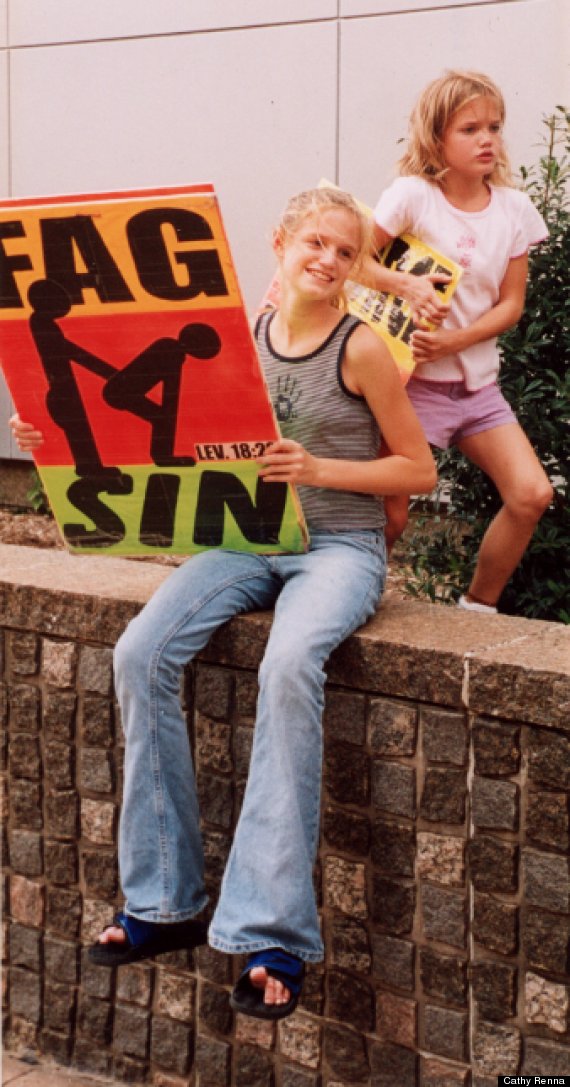