A diverse coalition of activists, clergy, and public officials are now trying to remedy that situation by asking Obama to award Ross posthumously the Presidential Medal of Freedom, America's highest civilian award. More than 150 volunteer organizers in 20 states have been rallied to build the grassroots campaign by Fred Ross Jr, -- Ross Sr.'s son and veteran organizer in his own right -- with the help of Eileen Purcell, a nationally respected social justice organizer for more than 30 years.

Why now? It is time to honor this unsung hero and to recognize, by extension, all organizers who continue his legacy working for social and economic justice.

Fred Ross Sr. (1910-1992) dedicated his life to fighting racism, discrimination, and other injustices by organizing working men and women to help themselves by building powerful grassroots organizations. For more than five decades he helped build the labor movement and built bridges between labor, religious, civic, and neighborhood organizations. He was a pioneer in opening doors to women and people of color, encouraging their full participation in leadership roles. Two of Ross' strategic innovations -- house meetings to recruit people into grassroots activism and voter registration and turn out efforts among infrequent voters - have become standard practice among organizers. 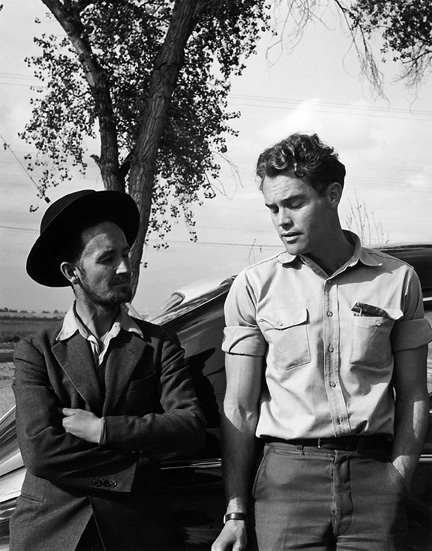 Fred Ross (right) with Woody Guthrie at the Arvin farm labor camp near Bakersfield, CA in 1939

Ross was born in San Francisco, grew up in Los Angeles, and graduated from the University of Southern California in 1937, intending to become a school teacher. But the social and economic upheavals of the Depression led Ross to seek more direct ways to challenge injustice.

Ross organized Dust Bowlers and migrant farm workers in California's oppressive agricultural labor camps. In 1939 he became the manager of the U.S. Department of Agriculture's Arvin Migratory Labor Camp near Bakersfield, the same camp John Steinbeck visited and drew on to write The Grapes of Wrath. He was the only camp manager of 29 camps in California who challenged the accepted practice of racial segregation and agitated for the workers to run the camps themselves.

During World War Two, when the federal government imprisoned Japanese Americans in concentration camps amid the anti-Japanese hysteria of the war period, Ross worked with the War Relocation Authority, helping thousands of residents get jobs and housing so they could get out of the camps. He helped challenge the discriminatory practices of employers against Japanese workers.

After the war, Ross spearheaded eight Civic Unity Leagues in California's conservative Citrus Belt, bringing Mexican Americans and African Americans together to battle segregation in schools, skating rinks and movie theaters. Through voter registration drives and community organizing, Ross organized parents to fight the practice of segregation in local schools. In 1946, the U.S. Court of Appeals ruled that the segregation of Mexican and Mexican American students into separate "Mexican schools" was unconstitutional, leading to the landmark legal victory, Mendez, et al v. Westminster School District. It set the precedent that foreshadowed the Supreme Court's 1954 Brown v. Board of Education ruling, overturning legal segregation in American schools.

In the 1950s, Ross worked in the Latino barrios of Los Angeles, San Jose, and other cities to build chapters of the Community Service Organization (CSO), a civil rights and civic improvement group, in California and Arizona. The founding leaders of the CSO included members of the steelworkers, clothing workers, meat cutters, and other unions. They formed the core of CSO's early leadership who built a powerful coalition that included the NAACP, the Japanese American Citizens League, the Catholic Church, and the Jewish community. Together they fought for fair housing, employment and working conditions.

One of CSO's biggest victories came in the wake of a severe beating of seven men (five of them Latinos) by Los Angeles police on December 25, 1951, known as "Bloody Christmas," leaving the victims with broken bones and ruptured organs. Pressure from CSO forced the LA Police Department -- which routinely harassed and abused blacks and Latinos -- to investigate the incident. The CSO helped build the case against the abusive cops by documenting complaints and keeping up public pressure in the media. This eventually resulted in the unprecedented indictment of eight police officers -- the first grand jury indictments of LAPD officers and the first criminal convictions for use of excessive force in the department's history. In addition, the LAPD suspended of 39 cops and transferred another 54 officers.

It was through his work with CSO that Ross encountered and trained many of the individuals who went on to play important roles in American political and civic life. In 1949, after building a powerful voter registration effort among Latinos and whites -- adding 14,000 new voters -- the CSO helped elect one of its leaders, Ed Roybal, to the LA City Council, the first Hispanic elected to that body. In 1962, Roybal was the first Latino from California elected to Congress, where he served with distinction for 30 years.

In 1952, while Ross was building the CSO chapter in San Jose, a public health nurse told him about Cesar Chavez, a young Navy veteran who lived with his wife in a barrio called Sal Si Puedes ( "Get Out If You Can"). Chavez at first avoided Ross, thinking he was just another white social worker or sociologist curious about barrio residents' exotic habits. But he finally agreed to meet with Ross, who that night wrote in his journal, "I think I've found the guy I've been looking for." Chavez recalled that "as time went on, Fred became sort of my hero. I saw him organize and I wanted to learn."

Ross trained Chavez, first as a CSO leader, then as one of CSO's organizer, and eventually as its statewide director. Ross also trained a young teacher named Dolores Huerta, and Gilbert Padilla, a spotter in a dry cleaning establishment, as CSO activists. Chavez, Huerta and Padilla eventually joined forces to build the United Farm Workers union starting in the 1960s. 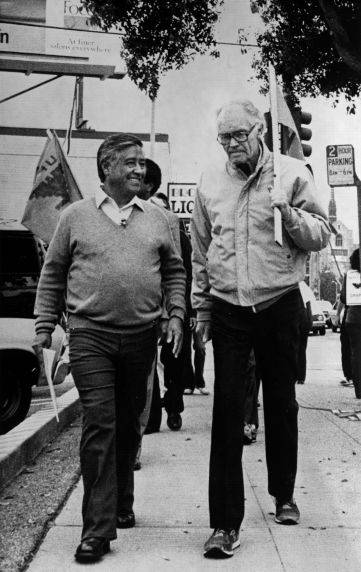 During his 15-year tenure with the UFW, Ross trained 2,000 organizers who led worker strikes and consumer boycotts in every major US and Canadian city, leading to major gains for farm workers and to the 1975 California Agricultural Labor Relations Act, which remains the strongest labor law in the nation today.

In the 1980s, Ross joined his son, Fred Ross Jr., at Neighbor to Neighbor to train yet another generation of organizers to challenge U.S. aid to Nicaragua's right-wing contras and to stop aid to the brutal Salvadoran military.

Ross was a political Johnny Appleseed, planting his ideas, and hoping they'd bear fruit in the future. Ross once said, "A good organizer is a social arsonist -- one who goes around setting people on fire."

That's what Ross did, listening to people with grievances, and helping them channel their anger into constructive activism that improved the lives of tens of millions of Americans, most of whom never knew his name.

He trained thousands of organizers and led countless campaigns to better humankind. Ross's goal was to empower people to vote, improve their neighborhoods, challenge inhumane working conditions, and foster coalitions of good will across race and religion. He was one of the great visionaries who fought in the freedom struggle of people in the United States and across the globe.

Carey McWilliams, author of Factories in the Fields and Southern California Country: An Island on the Land, and long time editor of The Nation, described Ross as an "unsung hero" and called him "a man of exasperating modesty, the kind that never steps forward to claim his fair share of credit for any enterprise in which he is involved."

"We need to celebrate the unsung heroes and every day activists who've made America a better society," said Durazo, who grew up in a farm worker family. "Fred Ross Sr. dedicated his life to helping ordinary people help themselves and give them the confidence to challenge injustice. He and the legions of organizers he inspired continue to have a profound impact on the labor movement, the Latino community, and all efforts to change society for the better."

In his recent inaugural address, President Obama recognized iconic struggles for freedom, equality and dignity for all, from Seneca Falls to Selma to Stonewall. Although they don't begin with an "S," he could added Flint, Michigan (the site of the 1937 auto workers' sit-down strike that helped build the labor movement) and Delano, California (ground zero in the United Farm Workers struggles).

But the task is unfinished. The freedom struggle continues, for workers, people of color, women, immigrants, the LBGT community and so many others. Grassroots community organizing is more crucial today than ever.

Now is the time to honor the other courageous trailblazers for justice, most of them unknown to the general public.

Secretary of Labor Hilda Solis took a first step when she honored the Memphis sanitation strikers two years ago and the foot soldiers of the farm worker movement last year.

By recognizing Fred Ross Sr., we not only acknowledge a person who dedicated his life to building the American Dream and safeguarding American democracy , but we inspire current and future generations of organizers to continue this sacred trust.

One of Ross's enduring legacies is a short pamphlet he wrote, "Axioms for Organizers," whose insights still instruct and inspire activists. One of them is: "Good organizers never give up -- they get the opposition to do that!"

In that spirit, anyone who agrees should contact President Obama by Thursday, February 28 and urge him to award the Presidential Medal of Freedom to Fred Ross Sr. There are four ways to take action:

Peter Dreier teaches politics and chairs the Urban & Environmental Policy department at Occidental College. His most recent book is The 100 Greatest Americans of the 20th Century: A Social Justice Hall of Fame (Nation Books, 2012)