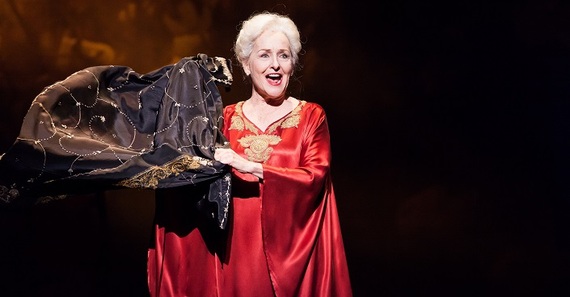 A Coffin in Egypt, a rarely produced 1980 play by Horton Foote would seem an unlikely subject for an opera, but in the hands of the marvelous Frederica von Stade and the talented composer and librettist team of Ricky Ian Gordon and Leonard Foglia, it becomes a tour de force. Set in rural Texas, the opera is essentially a 90-minute operatic monologue that tells the story of the star-crossed life and unhappy marriage of Myrtle Bledsoe , elegantly portrayed by von Stade.

Myrtle looks back over her life -- her dreams, her wrong decisions and her regrets over her troubled marriage to the philandering Hunter Bledsoe (David Matranga). Playwright Foote, who was supremely skilled at capturing the lives of his subjects, particularly women whose lives and talents were wasted, withering away in loveless marriages in desolate Texas towns. Gordon's music and Foglia's libretto perfectly capture the hopelessness of Myrtle's predicament as her dreams are slowly shattered.

But it is the enormous talent of von Stade -- not only her powerful and evocative voice -- but also her extraordinary acting gifts, that transform the opera into a tour de force. The wonderful details of von Stade's performance, from the subtle delicacy of her West Texas accent to the small, wistful gestures of her character, are transcendent and powerful. This is a performer of towering grace and achievement who has found a vehicle that is perfectly suited to her talents.

All the elements of this production seem to fall effortlessly into place, from the striking set by Riccardo Hernandez and lighting by Brian Nason, to the fine musical direction by conductor Kathleen Kelly. Performances by a gospel chorus of Cheryl D. Clansy, Laura Elizabeth Patterson, James M. Winslow and Jawan CM Jenkins offer a spiritual grace note that adds even more power to the production. And performances in supporting roles by Carolyn Johnson, Cecilia Duarte and Adam Noble provide additional texture to the power of von Stade's portrayal.