WASHINGTON (RNS) Frederick Douglass, whose seven-foot bronze statue was unveiled at the U.S. Capitol Wednesday (June 19), is known as the father of the civil rights movement. But the 19th-century abolitionist and former slave was also a licensed preacher.

“We do this not only to honor a giant, but also to remind one another of how richly blessed we are that such a man lived to prove that courage and ambition are not gifts of status but gifts from God,” said House Speaker John Boehner, R-Ohio.

Douglass was licensed to preach by a congregation of the African Methodist Episcopal Zion Church in New Bedford, Mass., and had many roles in the denomination. The AME Zion Church was where he honed his famous oratorical skills.

“He was what we call an exhorter first and then secondly, he was a licensed preacher but he was never ordained,” said the Rev. James David Armstrong, retired historian of the AME Zion Church. “He held other offices in the AME Zion Church, like steward, Sunday school superintendent, sexton.”

2. He published The North Star, an abolitionist newspaper, from the basement of an AME Zion church.

The Rev. Kenneth James, pastor of Memorial AME Zion Church in Rochester, N.Y., said the church building still exists but the congregation, now with 300 members, is in a new location. “It makes all of us proud,” James said of the statue dedication. “Especially being pastor of the church that he once was a member of, it heightens it for me.”

Cedar Hill, the home where Douglass lived in southeast Washington, D.C., for the last 17 years of his life, includes books, sculptures and photos that reflect his interest in religion. Ka’mal McClarin, curator of the National Park Service historic site, said the home includes images of angels and Jesus and photos of the interior and exterior of Washington’s Metropolitan African Methodist Episcopal Church. A fireplace mantle features busts of two of his favorite philosophers, David Friedrich Strauss, author of “The Life of Jesus,” and Ludwig Feuerbach, author of “The Essence of Christianity.” The library included several Bibles and books such as “History of the African Methodist Episcopal Church” and “Christianity, Islam and the Negro Race.”

“He pretty much embraced all religions,” said McClarin. “He studied all of them.”

4. He attended several churches in Washington.

After he moved to the capital city in 1872, he had a favorite pew in Metropolitan AME Church, which now bears his name. When the church dedicated a new building in 1886, he gave it two standing candelabras. The congregation presented him with a Bible before he departed for Haiti as a U.S. diplomat. Church historian Thelma Dean Jacobs said he gave many lectures at the church, including his last major speech, “The Lesson of the Hour.” His funeral was held there in 1895.

Frederick Douglass AME Zion Church in Elmira, N.Y., was named for the abolitionist. Its website notes that the church was inspired by an 1840 anti-slavery lecture by Douglass. It was founded by a group of slaves in the town that was a station along the Underground Railroad, which aided fugitive slaves. After its building cornerstone was laid in 1896, the church continued to grow and “was the largest Black church in the region during the late 1940’s.” 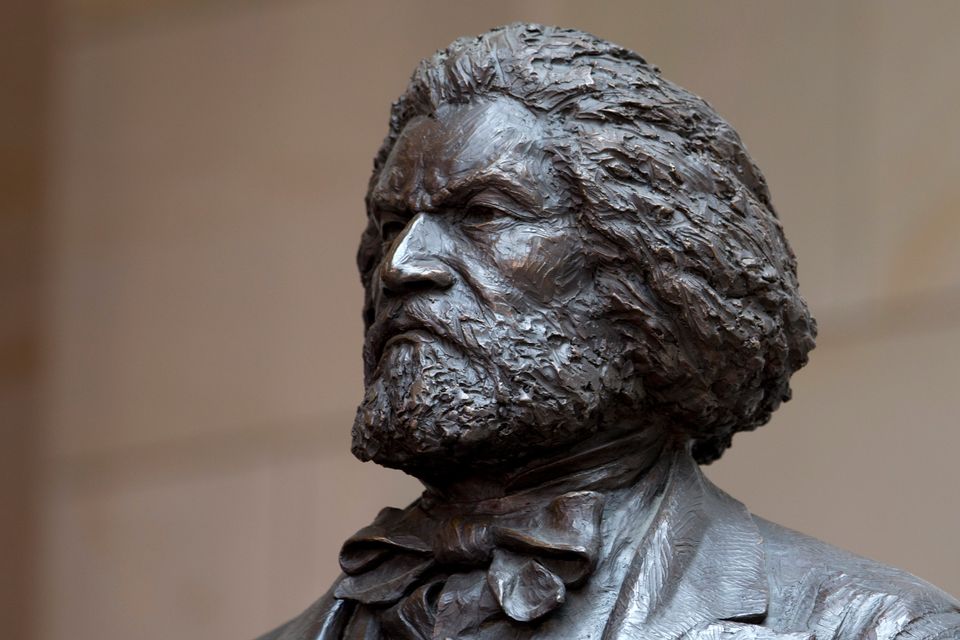 1 / 11
A bronze statue of 19th-century orator and writer Frederick Douglass is seen in the Emancipation Hall of the United States Visitor Center on Capitol Hill in Washington, Wednesday, June 19, 2013, where it was dedicated. The bronze statue of Douglass is by Maryland artist Steve Weitzman. (AP Photo/Carolyn Kaster)
AP