Brexit in the eyes of China's social media

The HotTopic of the week is Brexit, with one billion media impressions on Sina Weibo, which is just huge! Looking at the situation from a Chinese point of view, this came as very surprising news. For the Chinese, it just seems awkward giving the power to the people to take such an important economic and political decision through a referendum.

On June 23rd the UK decided to exit the E.U, and on June 24th David Cameron resigned. For Chinese people, this is just crazy, and the whole situation actually showed the negative effects of democracy. There was a lot of conversation on the web imagining a Western democracy like that in China, and the subsequent chaos in China following a referendum like that. To compare it to China, all you have to do is look at the mess that is happening in the U.K (which is a much smaller country with a better level of education), and imagine the terrible consequences on China's scale. The comments tended to be more about how reassuring the Chinese system is, rather than praising Western democracy.

As you know the Chinese love irony, so there were a lot of jokes as well. For example, people said that it's great news because now the British Pound is going down so much that it's like having a 10% sale when you buy a UK product. A KOL also made fun of the situation by creating an analogy between the E.U and a WeChat group, with the E.U being fed up to post money on the group and wanting to leave the WeChat group.

Other people just discussed the historical nature of this event, while others said that Chinese people have to be interested in what is happening right now in the U.K since this will probably be in the next 'GAO KAO' (end of year exams). 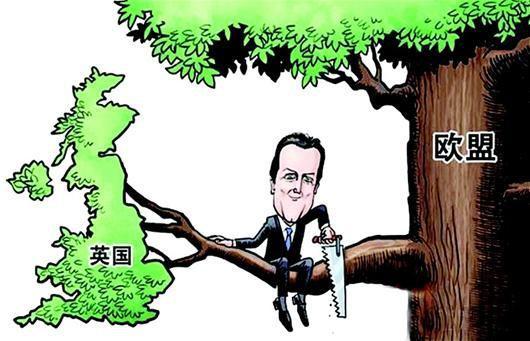 The HotBrand of the week is Vanke, a very famous and successful real estate group in China, loved by Chinese people that makes about 1 billion RMB revenue per year. It was founded by an amazing entrepreneur called Wang She, who is a Lao Ban (a leader). He managed to create great value for his company through simplicity, transparency, sense of responsibility etc. Chinese people just love his company and his character, because he is not interested in money. He is just a very inspired and passionate man who climbed the Himalayas, married a celebrity, and went to Harvard Business School when he took a back seat from the company because he wanted to learn again. In 1988, he gave away his company shares, and simply stayed on as a spiritual/cultural leader and chairman.

Now you have 2 main shareholders: one company called 'Bao Nang', and the other called 'Hua Ran', who are in a power struggle to get Vanke. Now it's the brand of the week because 'Bao Nang' (the main shareholder), asked Wang She to leave the company definitively. This is quite shocking as it's like a new shareholder asking the boss of Virgin to leave his company! This is now at the forefront of every business conversation, and has become like a reality show with everyone wanting to know what is going to happen. There were a lot of conversations on Chinese social media surrounding this topic, and how unfair this is towards such a great leader. Nobody really knows what will happen, but we should find out very soon! The early predictions are that he will be fired from his company. 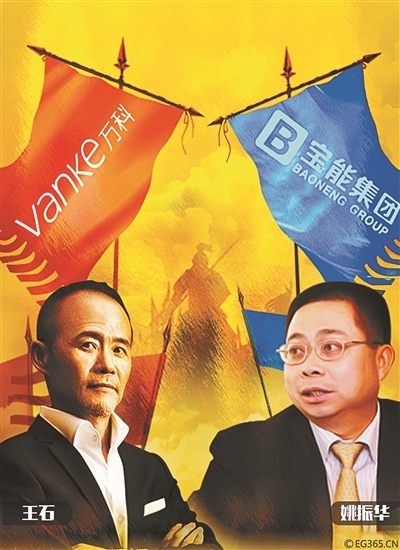 China resents the oblivion of a part of their population: the working class

The HotPost of the week is a photo documentary about really hard workers in a metal factory. It's about the lives of these people who are pretty old, who's work consists of carrying the raw materials to make metal. It's almost like modern slavery in a way, because the conditions are so incredibly tough. They have to move approximately 300 tons every day, and are paid only 60 cent RMB per ton, making about 200 RMB every day which is about 3 euro per day. Their living and working conditions are just shocking! The documentary is very emotional and shows the gap between the modern and digital forward-thinking Tier 1 Chinese cities and this other China in the countryside.

A lot of people were extremely touched by this documentary and felt a lot of empathy towards the workers. Especially people from Tier 1 cities who cannot believe that this is still happening in 2016, calling on the government to act and help these people. In a way, the documentary was very useful, by showing the plight of these workers and generating engagement, generating 234,000 retweets on Sina Weibo, and 200,000 likes. 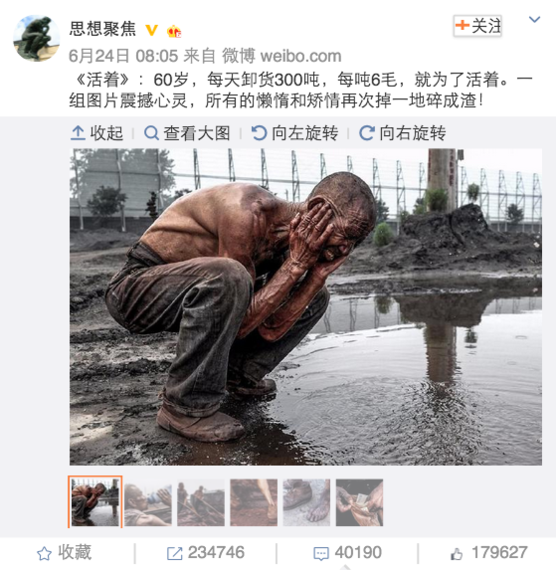