The HotTopic of the week is about the exam students pass at the end of their schooling, which is called Gao Kao. It's very important in China, with 9,4 million students passing this examination every year. As well as being a respected exam, there is a lot of pressure from the family with everyone talking about it. You can really succeed in life through this exam, and in a way it can change your life.

Beijing takes cheating very seriously, and there is a new law now that brands any cheating as criminal. As you know, cheating has been facilitated with the Internet, mobile phones, tech devices or just accessing the topics before the exam.

The exam is fairly typical, with math, languages and science. This year the students had to write about a sort of philosophical subject in Chinese, using 800 characters. It was interesting as in Shanghai, there were a lot of topics about other people's lives, and how the Internet has allowed you direct access to their lives. There was also a topic about virtual reality, so it was interesting to see that half of the topics were related to the digital life of Chinese people.

Everyone thought the exam was super complicated, and all the online comments went in that direction, until someone pointed out that the philosophy exam subjects in France were far more complicated. In France there are topics such as : "Do we have to do everything to be happy?", "Does having the choice really mean that we are free?", "Does the artist own his creation?".

So when Chinese people discovered the complexity and the abstraction if these French topics, they decided that the Chinese topics were pretty simple. 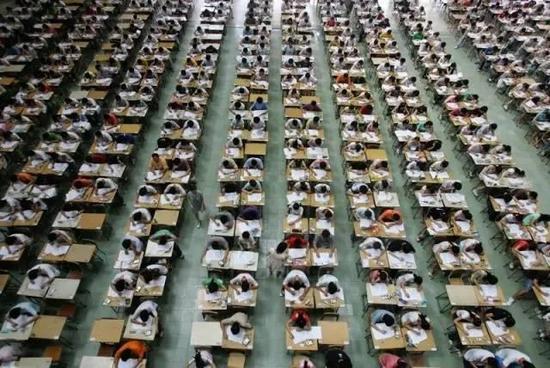 The HotBrand of the week is Lancôme from L'Oreal Group, and it's a PR crisis this time.

They organized a live concert in Hong Kong, with a singer called Denise Ho. She has a very bold personality, and is quite controversial in Mainland China, as she supported the 'Umbrella Revolution' in Hong Kong. She also posted pictures of the Dalai Lama on her Facebook account, showing her love and admiration for him.

So when L'Oreal announced her participation on the Lancôme Facebook account, a crisis began in Mainland China as nobody liked the fact that she was invited. Lancôme reacted badly by posting on their Sina Weibo account the fact that Denise Ho was not the face of Lancôme, and was simply invited to this concert. This did not go down well with Mainland China. Also, the celebrity's reaction was not good as she made a post on her Facebook account saying that she felt insulted by Lancôme's reaction.

She immediately received the full support from Hong Kong, who is fighting for independence. This in turn generated a whole new crisis, prompting L'Oreal to shut down Lancôme stores as well as other L'Oreal Group stores in addition to their PR department being ridiculed. 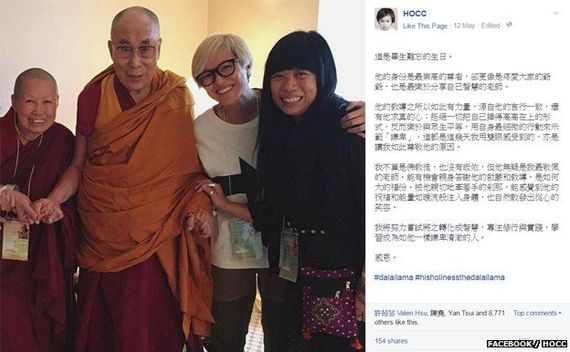 Stephen Hawking is definitely an Internet Idol in China

The HotPost of the week is Stephen Hawking again! He has become a real Internet idol in a very short time, and has already about 4 million followers on Sina Weibo. He is very respected, and loved by Chinese people, and this time, he posted a really nice post to support the students the day before their examination. He wished them a bright future, and whatever their inspirations might be, they should be fearless and should fight to succeed. He went on by saying that they represented the new generation, the new thinkers, and leaders of this world.

This got a lot of attention, and the Chinese people were very touched by his words and his timing. He received 175,000 retweets and 430,000 likes. There is a brand in China called Herbal Tea, who were very happy because they sponsored the official hashtag of the student examinations (#GaoKao2016), and that post brought them a lot of attention and advertising.

This is a great example of Chinese branding tactics. It is also interesting to point out that this year Stephen Hawking was the face of Jaguar China. 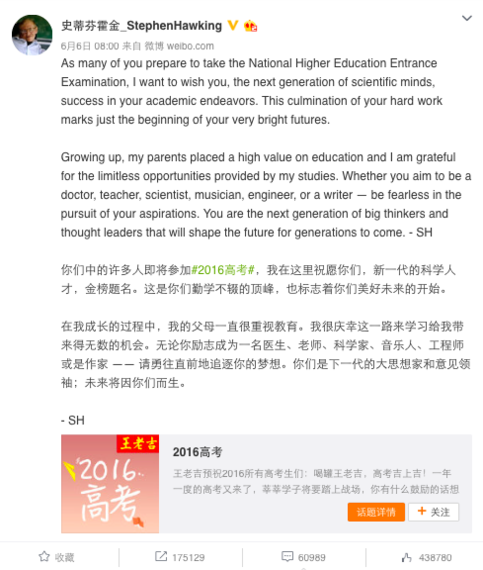