Youth Radio board member María Emilia Martin currently runs a non-profit in La Antigua, Guatemala devoted to the practice of independent journalism in the public interest. She's sent us this dispatch from Guatemala during the historic political upheaval currently underway. Half of Guatemala's population is under 19-years-old, making it the youngest population in Latin America, and analysts point to their anger with the current regime -- and use of social media -- as instrumental is shaking up the status quo there. 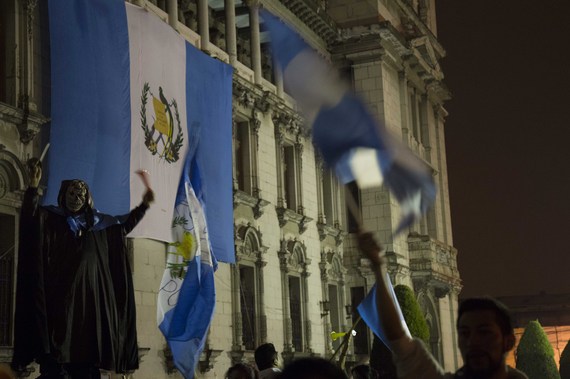 Guatemalans will go to the polls this Sunday amidst a severe political crisis to elect a new President, Vice-President, mayors, and members of Congress. The vote, in which 7.5 million Guatemalans are eligible to participate, will come just a few days after the most turbulent and surprising political events in Guatemala's recent history -- including months of peaceful civic protests, a historic and unexpected vote by the Congress to strip now former President Otto Perez Molina of his immunity from prosecution on Wednesday, followed by the former Army General's resignation.

On television screens, Guatemalans are seeing their ex-president sitting stoically in court, listening to hours of recorded wiretapped phone conversations that the Justice Department says will prove him guilty of money laundering, and fraud. On Thursday, they watched the swearing-in of 79-year-old Vice-President Alejandro Maldonado as Guatemala's new head of state. Maldonado was appointed Vice-President only in May, after then second-in command Roxanna Baldetti was forced to resign in the wake of revelations of her involvement in the corruption scheme to defraud the customs department of millions of dollars. That scandal is known here as "La Linea," for the telephone line businesses would call to get cut-rate customs tariffs in return for bribes.

Meanwhile, along many streets of the nation's capital Guatemala City, hundreds of signs telling people not to vote are placed alongside those extolling people to cast their ballot for the leading LIDER party's candidate, Manuel Baldizon, with rumors flying that the same party was responsible for both messages. Voter absenteeism, say some analysts, would help Baldizon, the candidate that until recently has been thought to be next in line to be elected -- by reducing the turnout in urban areas, where he is not a favorite. Baldizon has been losing points in the polls as the government customs fraud scandal has unraveled since being first revealed in April. Some of Baldizon's senior officials have been tainted with participation in other corruption schemes, and the country's Supreme Electoral Tribunal in early August forced him to suspend his campaign for having surpassed the allowed $6.8 million dollars in campaign spending. Meanwhile, the independent U.N. backed anti-corruption commission, known here as the CICIG, has charged that up to one-fourth of electoral contributions to all parties derive from criminal organizations.

On Thursday, Guatemala's independent television network Guatevision played a secret recording of a meeting Baldizon had with close associates in which the candidate criticizes the widespread and peaceful anti-corruption demonstrations which have been a leading factor in bringing down the Perez Molina government, and appears nervous about the possible outcome of Sunday's elections.

Baldizon has accused the network of editing the recording, in which he calls on his party's candidates to spend all possible resources for the transport of voters on September 6 -- known in this country as the practice of "acarreo" -- literally the "hauling" of voters to the polls, despite this being banned by law.

"The 'acarreo' system is certainly going to be in place," says political analyst Daniel Haering of the Francisco Marroquin University in Guatemala City. "You can't do anything about that, it's very difficult to control." He says it's difficult to signal which unmarked cars and trucks are hauling voters from usually isolated rural communities to vote in the regional capitals, usually in exchange for money, a bag of food, or even, as some people are saying will take place in this election, kitchen appliances or even motorcycles. "In Guatemala you have a large number of people who're poor, and who don't have any incentive to vote. So what the parties do is say, 'Let me give you an incentive to vote.' So, yes you do have a system of paying for those votes, but that's very difficult to prove." Still, says Haering, people do cast their individual ballot in secret, so many "hauled" voters may still not vote according to the wishes of the party that provided their transport.

Other presidential candidates include comedian Jimmy Morales, of the FCN party, whose standing in the polls has been rising in the past few weeks as the "outsider" candidate, and center-left National Unity of Hope party candidate and former First Lady Sandra Torres, who now ranks third in most polls.

Guatemalans also are scheduled to vote for a new vice president, as well as all 158 of its congressional members, 20 members of the Central American Parliament and mayors and councils in hundreds of municipalities throughout the country.

Some of the protestors whose weekly demonstration have helped bring down the Perez Molina regime have been demanding that Sunday's elections be postponed, fearing the political turmoil may lead to violence at the polls. There are reports that hospitals throughout the country are preparing for this eventuality.

Still, political analyst Haering says he thinks people will be surprised by the turnout, and that when the polls close at 6 pm on Sunday September 6, people around the world will have witnessed a fair election. "This is the most amazing democratic social movement I've ever seen in my life: it has been peaceful, it has been massive, and it has put in jail the President and the Vice-President of one of the most corrupt regimes in Guatemala -- I think this is positively hopeful, " he says.

Other analysts say the political system in Guatemala will not truly change until Congress adopts substantial electoral and other reforms. Says Manfredo Marroquin of Accion Ciudadana, a branch of Transparency International, "We should learn from those in history who said that nothing changes until everything changes." His organization will be among dozens of watchdog groups monitoring Sunday's elections in Guatemala.

If no candidate receives over 50 percent of the vote, a run-off between the top two vote getters is scheduled to take place in October.

Youth Radio Board Member Maria Emilia Martin currently directs the GraciasVida Center for Media, a nonprofit organization based in La Antigua, Guatemala and devoted to the practice of independent journalism in the public interest (www.graciasvida.org). For the last eight years, the Center has worked to improve the working situation for rural, provincial and indigenous journalists in Guatemala, Bolivia, and Nicaragua, as well as to improve the coverage of Central America on U.S. public radio. An award-winning U.S. public radio journalist for over two decades, Martin developed ground-breaking programs and series for public radio, including NPR's Latino USA, and Despues de las Guerras: Central America After the Wars. She's the recipient of Fulbright and several Knight Fellowships, including the John S. Knight Professional Journalism Fellowship at Stanford University, and the Reagan-Fascell Democracy Fellowship awarded by the National Endowment for Democracy. Martin has won over two dozen awards for her work covering Latino issues and Latin America.