I'm not a parent. I have three nephews, however, and I'm happy having the role of uncle. I wasn't always satisfied with being childless. In fact, one of my early struggles with having HIV was mourning the loss of potential parenthood.

Fortunately, when it comes to being a mother or a father, things are much different now for people living with the virus. The chance of passing on HIV to your child through conception has been virtually eliminated by the use of biomedical prevention, which includes pre-exposure prophylaxis (PrEP) and treatment as prevention (TasP). 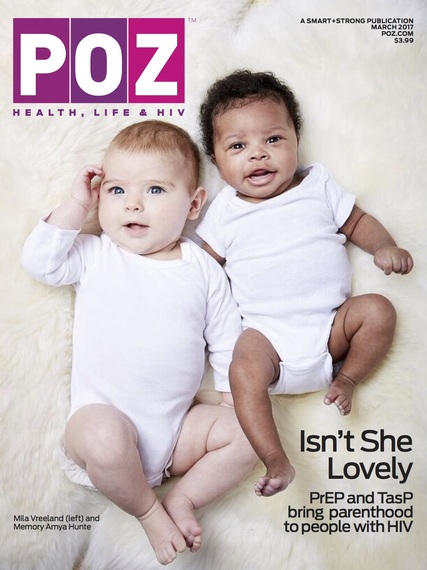 These two science-based methods are now solid prevention options for mixed-status couples considering conception. However, just as with PrEP and TasP in general, the understanding that both methods prevent transmission of the virus for potential parents and children is not yet widespread. Dispelling misconceptions about conception and HIV is needed.

That is why two babies--Memory Amya Hunte and Mila Vreeland--grace the cover of this issue of POZ. Memory's parents relied on TasP, and Mila's parents used PrEP. Both babies were born free of HIV, and each of the HIV-negative parents stayed that way. Click here to read more about their stories.

Although it's true that children and caregiving are stereotypically associated with women, it's also the case that both are important to all people regardless of gender. Babies need care, no matter who is giving it. As it turns out, babies aren't the only ones who need care among those affected by HIV.

In the early years of the epidemic, caregiving was primarily about easing the suffering of those who were dying followed by tending to those with serious HIV-related conditions that too often led to death. There just wasn't much time for thinking more broadly about caregiving. People were dying.

As the decades passed, it seemed that the need for caregiving on a mass scale was over, thankfully. People weren't dying in the numbers they once were. Too many people still succumbed to the virus, but the era of caregiving related to HIV/AIDS was in the past--or so we thought. Long-term survivors are now proving that assumption to be wrong.

The long-term effects of having survived the trauma of the early years of the epidemic have finally surfaced in the past few years. The symptoms vary, but the similarities to posttraumatic stress disorder are striking. Depression, isolation and survivor's guilt are wreaking havoc. The nature of caregiving now is certainly different, but the need is real and urgent. Click here to learn more.

Women represent about a quarter of people with HIV in the United States, yet still they often struggle for visibility. Further, women have unique HIV concerns, from the obvious anatomical differences to the sometimes less obvious obstacles like sexism and economics.

As a result, advocacy groups such as WORLD (Women Organized to Respond to Life-threatening Disease) seek to spotlight the needs of women living with HIV. Click here to read our Q&A with Cynthia Carey-Grant, WORLD's executive director.