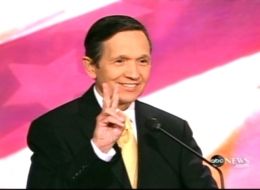 Well! As if this campaign wasn't filled with enough surprising twists, here's one more: A Senior District Court Judge in Clark County, Nevada, Judge Charles Thompson yesterday ruled that Democratic presidential candidate Dennis Kucinich be allowed to participate in today's Democratic debate in Las Vegas, hosted by MSNBC. The cable channel had previously excluded Kucinich, limiting participation to top three candidates Hillary Clinton, Barack Obama and John Edwards and, other than Kucinich and the also-excluded Mike Gravel, the only ones left in the race. MSNBC had envisioned an intimate, sit-down affair moderated by Tim Russert and Brian Williams with the candidates asking questions of each other; not so, said the Judge, unless Kucinich can play, too. If not, Judge Thompson pledged to issue an injunction to stop the debate. Dang! Showdown at the OK Corral!

According to the AP, MSNBC is filing an appeal and seeking an "immediate hearing" before the Nevada Supreme Court. (Does this remind anyone else of an episode of "Studio 60?") Presumably, the network will argue that it is not unfair to Nevada voters to exclude Kucinich from the proceedings, and they'll probably mention financial resources and polling numbers, and possibly the fact that John Edwards' father worked in a mill.

There's an insult to injury issue here, too — Kucinich was originally invited to the debate, but was summarily uninvited when Bill Richardson dropped out. Ouch. Here's what Thompson had to say about the matter:

"Had it been established at the beginning that they'll only take the top three for the debates, I wouldn't have any problem enforcing it... I'm somewhat offended that a legitimate candidate was invited to a debate and then uninvited under circumstances that appear to be that they just decided to exclude him."

So: Does plucky Judge Thompson have a leg to stand on on here? Well, since I have no concept of the laws governing such things I will refrain from opining either way, all I will say is this: On the one hand, you've got a media conglomerate determining which candidates will be exposed to a giant national audience (or, you know, biggish) ; on the other, you've got a candidate whose poll results are apparently so unremarkable that he was excluded entirely from this article about the most recent poll (Obama, by a hair). He's also absent from this "Horserace 2008" article in the LAT. Strict fairness on one side, viability on other — how the Nevada Supreme Court balances those two factors will decide the outcome.

But even so, it seems like MSNBC ought to let Kucinich debate. Why? Well, for starters, they officially invited him, and it's horrendously uncool for them to uninvite him, no matter what. But also, this race has become homogenized very quickly: The three top-tier frontrunners, always zeroing in on each other, always shifting the focus of their barbs between them — they're gonna do their thing anyhow, why not allow for another voice in there? Distant-fourth Richardson got plaudits after the last debate, why not allow Kucinich to provide a counterpoint in this one? UFOs aside, let's resist the temptation to dismiss Kucinich — his position has been strong and unwavering and his message of "strength through peace" not at all an unwelcome one, even if he is not the candidate of choice. With the other candidates, the focus has of late been on the economy, and each other; this is a candidate whose platform is built around withdrawl from Iraq — so with him, you can pretty much guarantee the subject will be mentioned.

Also, never mind all that, let's revisit the format: Candidates will be asking each other questions. Imagine the fun that Kucinich would have with that! (And, by extension, us.) They would surely be distinct from those posed carefully by our moderators and selected from the audience (and presented by Natalie Morales). A little Kucinich excitability in there might spice things up and allow for (absent fisticuffs from Hillary and Obama, of course).

But the most important reason is because it's fair. With candidates on both sides of the aisle sulking that they don't want the media elites telling them what to do — especially after a few debates now where candidates have been excluded by networks — it may just be incumbent at this stage for the media elites to chill a bit in the name of democracy. This debate may be on the eve of the Nevada caucus, but it's being televised to the whole country, and even if Kucinich is gone by the time their primary rolls around, they will still have the chance to hear and learn from him, as the case may be. The argument that he'll distract from the head-to-head hammering of the three main candidates doesn't hold water, either: At one time, the candidates all had to vie for attention and race the stopwatch, but now you're in the top three — one more does not a diluted debate make. (And meanwhile, the Republicans still have a whopping six, plus Duncan Hunter.) Hell, that even leaves room for Mike Gravel, if you were feeling lucky.

Two other reasons to have Kucinich at the debate, by the way: Elizabeth Kucinich and Viggo Mortenson. Who says that Kucinich doesn't have something for everyone?

The Congressman from Ohio will probably not crack the lineup tonight, but still, you've got to admire his scrappiness. It's too bad NBC doesn't seem to. It would be a gamble to include him, I suppose, but then again, they are in Vegas. Could there be a better place? Well, it all depends — if Judge Thompson's order gets a lucky blow on the dice, it just might be.

*And while we're on the subject: If you think that my "OK Corral" reference is inappropriate, then you've obviously never seen MSNBC's cowboy n' western-infused commercial promising a hot time at the saloon or some such thing, with Williams' and Russert's headshots vaguely reminiscent of old-timey "Wanted" posters. I'm pretty sure there were swinging doors, and maybe some scary organ music when the villain walked in, with a big moustache. Okay, back to reality.