At what point can an emergent movement look back and claim a history? And what is that history if, over the course of the time chronicled, separate strands have knit together into a whole that was unimagined at the outset? Do the lineages of each become the shared ancestry of what is emerging?

These are the opening lines of what is effectively the first written "history" of the movement for integrative health and medicine. I put "history" in quotation marks because what is presented in "Rise," the 68-page e-book freely available via FON Consulting - through an investment from XYMOGEN - is a series of 125 stepping stones. Each is a paragraph or two of text together with a portrait or logo, marking the achievement of the institution, organization or individual called out, and links to more details. 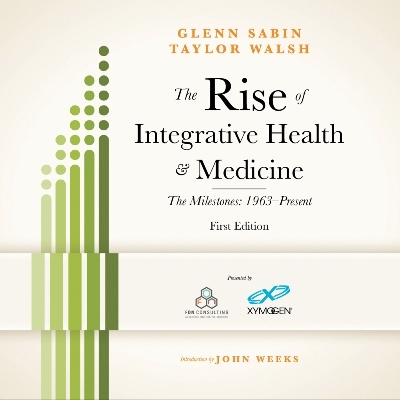 These milestones provide readers a guided walk from the origins of the movement in the "cultural amniotic stew" of the 1960s. The tour passes through decades of steady formative work amidst disdain and restraint of trade from regular medicine. We move through a phase of "non-integrated integration" and into multiple emerging collaborations. Today we see evidence of leadership by the movement amidst an incipient convergence with the nascent efforts of progressive leaders of the dominant school of medicine to shift the reactive medical industry toward a focus on creating health.

The book is the brainchild of well-known integrative clinic and integrative oncology consultant, author and marketer Glenn Sabin, FON's founder and author of the book N of 1 about his own cancer journey. The book was principally written by Taylor Walsh, a long-time writer and consultant in the field. The milestones themselves are significantly based on content documented in my own Integrator Blog News & Reports and a presentation I gave on the history of the field at the October 2015 People, Planet Purpose conference of the Academy of Integrative Health and Medicine (AIHM). Sabin asked me to write the introduction to "Rise." The lines at the top of this column are the way I chose to open.

The Five Eras for Integrative Health and Medicine

Since the 2015 AIHM conference I have had a chance to refine my thinking on the history through presentations before multiple audiences. These include the Leadership in Integrative Healthcare Program at Duke University, the CAM Masters at Georgetown University, the Integrative Medicine Scholars Program of the American Medical Students Association, and as an in-service for a major foundation in the field. I worked on it further via an invited chapter for a new edition of Len Wisneski, MD asked me to write for the upcoming edition of his pioneering textbook on the field..

In the revisions, I have come to view the movement in "5 Eras." This may be a grandiose framing for a 50 year movement that wasn't even named until 20 years ago. Yet I think the framing can be useful sense-making of the 125 milestones. Here they are, briefly. 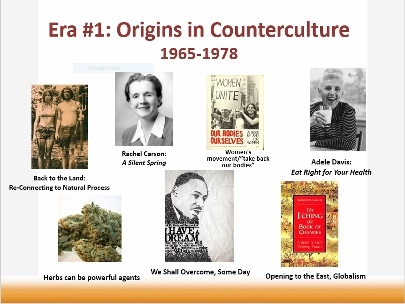 Era #1: Formation From the "amniotic stew" of the 1960s to the remarkable era of organizational creation from 1977-1979 that created engines of action to advance the proliferation of new whole-person ideas. American Holistic Medicine Association. The first new naturopathic colleges for the modern era. American Holistic Nurses Association. The predecessor to the American Herbal Products Association. The patient-centered care movement. The first acupuncture school and a national professional association within two years. And the first publications from mind-body research giants Herbert Benson and Jon Kabat-Zinn. See Milestones 1-9. 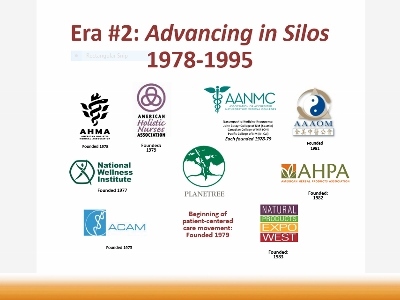 Era #2: Advancing in Silos While each may be seen as being born of the same turbulent Mother, each was seemingly adopted out into separate homes. The holistic nurses and doctors created separate communities through their conferences and periodicals. They made rare forays into protective policy activities. The acupuncturists and naturopathic doctors, and later massage therapists and midwives, busied themselves with the multiple tasks of professional formation. They created schools, accrediting bodies, national certification, state licensing, and the state and national professional organizations to drive such activity. The chiropractors, in what proved to be a benefit for all, stared down the AMA in the movement's decade-long, freeing, "Big Honking Lawsuit," Wilk Versus the AMA, that found that the AMA was engaging in restraint of trade in its suppressing the profession. The first crumb-track of what has become the National Center for Complementary and Integrative Health appeared in the National Institutes of Health. Milestones 10-24 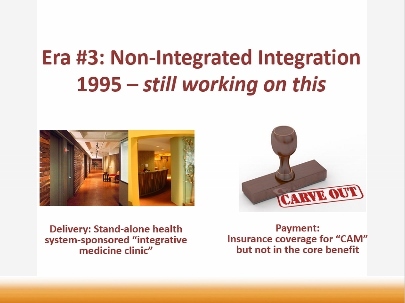 Era #3: Non-Integrated Integration A January 1993 publication in the New England Journal of Medicine led by Harvard's David Eisenberg, MD, reported that a third of adults in the USA were using "unconventional medicine" and over $3.7-billion/year was being spent out of pocket. Phoenix rising! This was a wake up slap in the face to mainstream stakeholders. They wanted access to that cash and to the individual users so they began developing nominally "integrative programs." But the didn't really want to require their chief medical officers and deans to actually value these new products, practices and practitioners as potentially tools to better the high-tech and pharma-based medical treatments they offered. This was the era of insurance "carve-outs" and hospital-sponsored stand-alone clinics, of utter misalignment of integrative health's patient-focused, time-intensive, potentially cost-saving methods with the ravaging expansion of the nominally not-for-profit, capitalistic medical industry. Milestones 25-44 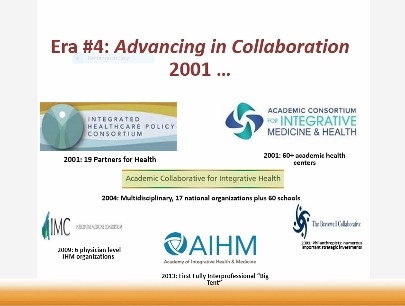 Era #4: Advancing in Collaboration Even as 1977-1979 showed a remarkable flurry of activity in response to the combustive, the emergent interest of mainstream stakeholders in accessing the consumers and their billions kicked off a period of movement-wide collaborations between 2000-2003 to stimulate greater impact. The theory was that together might propel greater advances. We see the first Integrative Medicine Industry Leadership Summits and National Policy Dialogue to the formation of the Bravewell Collaborative of philanthropists, the Integrative Health Policy Consortium, the Academic Consortium for Integrative Medicine and Health and the Academic Collaborative for Integrative Health. A consensus had arrived that working in ever larger consortia would be key to making transformative impact. Milestones 45-79 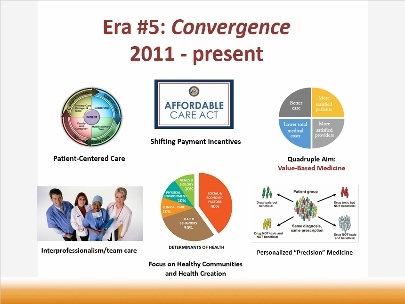 Era #5: Convergence in Health Creation The hatchling movement in regular medicine, stimulated by aspects of the Affordable Care Act, to move "from volume to value" - from an industry that thrives off of disease to one that might be an agent of health creation in communities - offered a first chance for real integrative alignment. Integrative medicine leader Tracy Gaudet, MD is named as a key transformational officer at the VA. Donald Berwick, MD, co-founder of the Institute for Healthcare Improvement and past administrator of CMS urges hospitals into a 30 year movement toward "salutogenesis" - and named integrative health leaders as his mentors. Integrative strategies are embedded in major systems like Allina, the VA, and the DoD. National strategies for pain, for prevention and health promotion, highlight the value of integrative approaches. Milestones 80-125 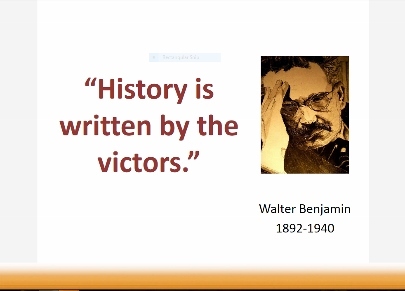 The day of the publication of "Rise" I attended the biannual conference of the Harvard Osher Center for Integrative Medicine. The center is led by world re-known connective tissue scientist Helene Langevin, MD. I shared with her that my first talk on the history I called "Connective Tissue: A Winner's History of the Movement for Integrative Health and Medicine." The presentation leads with magnified picture of connective tissue side-by-side with an image of multiple interconnected cells representing distinctive integrative health organizations.

My point then, as now, is simple - and it is the fundamental value that Sabin, Walsh and XYMOGEN have created with "Rise". We are stronger if we see ourselves as connected - if we learn to operate as a combined and ever more expansive force for health in the United States, and globally. To be successful, we serve ourselves and mission to know and claim our history. As 20th century German philosopher Walter Benjamin famously said: "History is written by the victors."