"The press loves McCain," MSNBC's Chris Matthews has declared. "We're his base." This tawdry media love affair with the presumptive GOP nominee is the focus of a new book by two experts in the field -- David Brock and Paul Waldman of the progressive media watchdog Media Matters.

In Free Ride: John McCain and the Media, Brock and Waldman "illuminate how the press falls for McCain's 'straight tak' and how the Arizona senator gets away with inconsistencies and misrepresentations for which the media skewers other politicians." HuffPost discussed the book recently with Waldman (buy a copy of your own here):

HuffPost: Can you explain the thesis of the book, the key points you found after investigating McCain's relationship with the national media?

Waldman: What you find when you examine McCain's treatment by the press is this: The rules are different for John McCain. Other candidates get defined by their biggest weaknesses and the worst thing they ever did; McCain gets defined by his best qualities and the most noble thing he ever did. Other candidates find a press corps that mocks their spin and assumes they're phonies and liars; McCain's spin frames his coverage. (When was the last time you saw a story about McCain that didn't refer to him as a "maverick" or his utterances as "straight talk"?) Other candidates view the press as an adversary, and the coverage they get reflects that relationship; McCain views the press as a partner and friend, and that's how they treat him.

The result is that a whole series of ideas about McCain -- that he's a maverick, that he's a reformer, that he's an ideological moderate -- have become so embedded in the coverage of McCain that journalists no longer even ask whether they're true. And in many cases, these ideas are either completely false or have been wildly exaggerated. 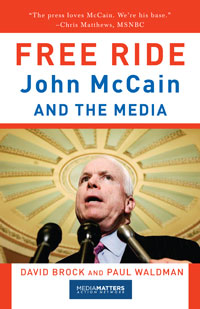 McCain recently hosted a group of journalists for an off-the-record weekend excursion at his ranch. What was going on there? Is that normal?

It's not the first time a politician has gathered reporters at his home for a little R-and-R in an attempt to woo them with his winning personality. But what McCain understands better than anyone in his profession is that nothing is more important than establishing a personal relationship with reporters. As he's found time and time again, when you build up those ties of friendship, they become a resource you can draw on later. So when something pops up that would be enormously problematic or even fatal for another politician, reporters give McCain the benefit of the doubt.

They also display a remarkable ability to take uncomplimentary stories about McCain and turn them to his benefit. The Keating Five scandal? It's now told as a story of redemption: McCain sinned, but then saw the light, and the episode turned him into the reformer he is today. His flip-flopping on the Confederate flag in the 2000 campaign? It just shows how full of character McCain is, because he later admitted that he had changed his position for political reasons. These episodes, and many others, show how McCain can find in his own transgressions the spin that reporters will eat up and use to frame their subsequent discussions of the issue. Because McCain has worked to make them feel they know him and like him, they're open to that spin when he offers it.

If we were asked to advise reporters on this question, we'd say this: It's OK for you to eat McCain's ribs, but when it comes time to write your stories, you need to make sure the sweet taste of barbeque sauce isn't still lingering in your mouth.

How do progressives counter McCain's wooing of the press without alienating those very same reporters? Has Hillary Clinton's tactic -- of sometimes aggressively calling out unfair coverage -- been successful in your view?

We're sympathetic to reporters on this score -- nobody likes having their work criticized, and reporters often find their work attacked in a very public way. But they have a particularly critical set of obligations to the public. It is no exaggeration to say that the choices they make determine who gets to lead our country. We believe that all politicians should be held to the same standard of scrutiny, regardless of how friendly they are with reporters.

So progressives do have to call out coverage that is inaccurate, misleading, or unfair. It should be done in a way that's respectful, but it has to be done. As progressives, we believe in journalism -- we're not looking simply to replace coverage favorable to conservatives with coverage favorable to progressives. The public is best served by journalism that is as complete as possible and as accurate as possible, and that isn't afraid to tell the truth, even if some people are going to find it unsettling to their side.

In the past, McCain has often been hammered by conservative media figures like Rush Limbaugh. Have you noticed any shift since McCain became the presumptive GOP nominee?

It's hard to imagine that people like Limbaugh won't come around to McCain's side once they are faced with a Democratic nominee they really hate. People like Limbaugh are laboring under the false belief that McCain is some kind of liberal -- an idea we refute at length in the book. And when you ask them why they think that, a common response is, "The media love him, so he must be a liberal." What they don't understand is that the affection for McCain among the press corps has nothing to do with ideology. It has many components, from their approval of campaign finance reform, to their respect for what McCain went through nearly 40 years ago in Vietnam, to the way the story McCain has told about himself -- that he's an anti-establishment rebel -- is pitched right at the way reporters like to think of themselves. But the most important part is the way McCain deals with them on a personal level. In the book we quote Andrew Ferguson, a conservative journalist, who wrote, "I never saw Heifetz play the violin, or Hogan hit a five-iron, or Pavlova do a pirouette. But I've seen John McCain work a reporter. And I knew I was seeing a master at the peak of his form."

Relatedly, Limbaugh points to the New York Times story on McCain's relationship with lobbyist Vicki Iseman as evidence that the "liberal media" has ended its love affair with the Arizona senator. How do you respond?

If anything, that New York Times story proves just the opposite. Think about how it played out. Within just a few hours, the story ceased to be about John McCain, and became a story about The New York Times. As the coverage shifted, the true meat of the story -- what McCain did for Paxson Communications -- died with virtually no follow-up from any news organization. How much have we heard about it since? Yet here was a case in which McCain did almost exactly what got him in trouble in the Keating Five scandal. He got tens of thousands of dollars from this corporation, was flying around the country on its corporate jet, had a good friendship with its lobbyist, and pressured the FCC at the company's behest.

McCain's connections with lobbyists are one of the great underreported stories of this race. His campaign is loaded with them. But that doesn't jibe with the story reporters have been telling about him for years, that he's the special interests' biggest enemy. When it comes to John McCain, reporters don't use new information to update their impressions of who he is. If that new information contradicts the story they've been telling, they ignore it.

McCain has had an extraordinarily contentious relationship with the Arizona press for most of his career. They've seen him in full -- his strengths, but also his weaknesses, like his volcanic temper, his penchant for vindictiveness, and his thin skin. The picture they paint is much more complex and nuanced than what you find in the national media. And in response, he's made his displeasure with them clear. In 2000, he actually refused to grant a seat on the "Straight Talk Express" to the reporter covering him for the Republic; maybe if her stories were as starry-eyed as what the national media were writing, she would have been invited aboard. But while the national media figures were partying with McCain, she had to rent a car and follow the bus around the campaign trail. And this was the reporter for the largest newspaper in his home state.

Any tips for readers who see outrageous reporting on McCain from mainstream outlets? Is there anything they can do beyond throwing a shoe at the TV?

People should always be willing to talk back to the media -- send them an email, give them a call, let them know that they did something wrong (and of course, if you want them to listen, you have to do it with civility and respect). The next thing people can do is spread the word. Post it to a diary or a comment on one of the blogs you read; get it in front of as wide an audience as possible. Tell your friends and family -- word of mouth really does work. We hope our book will start a conversation about how McCain has been covered and continues to be covered, so that reporters will step back and take a look at how they've been reporting on McCain.