Given the horrifying attacks on Charlie Hebdo in France and a seemingly related firebombing attack in Germany, I realized now was the right time to release this video of an interview I conducted with free speech hero Jonathan Rauch last summer.

In the interview, Rauch talks about the scandal of campus speech codes (including his "favorite" campus speech code), and how a speech code mentality has "burrowed into" the mindset of society (here's an appalling example). Most relevantly, though, Rauch explains how, despite incessant claims that preventing "hate speech" will benefit minorities, his experience as a gay man who had to deal with anti-gay bigotry for most of his life taught him that "free speech is not only a minority's best friend, in some ways it's our only reliable friend."

This video was recorded before the recent horrors in Paris. But it resonates today because, as Rauch explains, the issue that inspired him to write his masterwork on freedom of speech, 1993's Kindly Inquisitors, was the West's "watery, weak" response to the fatwa against Salman Rushdie back in 1989. That fatwa against Rushdie now seems like a shot across the bow: a warning that Islamic fundamentalists would start aiming to have a direct impact on speech well outside the Islamic world. The Rushdie affair also served as a warning sign that Western intellectuals had weakened in their resolve to support freedom of speech -- a fact that has proved to have worrisome implications in the decades since.

While many readers of this column might not remember the enormous flap over Rushdie, most probably will remember a second major free-speech event of recent years: the West's handling of the Mohammed cartoons controversy back in 2005. As explained in Flemming Rose's important new book, The Tyranny of Silence, a Danish newspaper's attempt to show that the sky would not fall if cartoonists drew their renditions of the Islamic prophet was met (months later) with riots and violence across the globe. At this time almost every major Western publication made a fateful decision: they would not show the public the cartoons that so many people were dying over.

In light of what happened at Charlie Hebdo, it's now quite apparent that this was a huge mistake. Every newspaper that covered the cartoons should have shown those cartoons, not as some kind of deep political statement, but just as standard practice. People were dying over cartoons. That is virtually unprecedented. Therefore, readers had to be able to see the images used to justify those deaths if they were to understand what was happening. It's simple. Had most newspapers followed this basic journalistic practice, the violent response to the Danish cartoons would have backfired by greatly magnifying the ubiquity of the cartoons.

In the blogosphere, the fact that attempts to censor usually end up amplifying the message instead is called the Streisand Effect (you can read more about its origins here, and how one Kirby Delauter, a county councilman in Maryland, recently discovered it). Though it's a funny name, it represents a powerful, seemingly natural result that renders attempts at censorship especially futile in the Internet age.

I'm under no illusion that fundamentalist terrorists are completely rational. But, if every time a controversy like this happened, it ended up backfiring, it seems likely that at least some terrorists would see attacking cartoonists as futile. And, again, I'm not suggesting that what we needed here was some kind of grand political statement in a protest publication (though I certainly do not oppose those). I'm talking about neutrally, straightforwardly following the responsible journalistic practice of showing newsworthy images.

The Charlie Hebdo massacre should've brought the folly of the decision not to republish the Mohammed cartoons into stark relief. Not only had newspapers across the globe forsaken their duty to the public to let them know what was going on, they incentivized violent responses. And maybe, just maybe, if every news outlet in the West had shown the Mohammed cartoons years ago as a matter of standard journalistic practice, the Charlie Hebdo attacks would not have happened.

This is, by the way, why in American law you don't permit "heckler's vetoes." Once you set the precedent that speech will be censored if it offends people who respond violently to that speech, you guarantee that more people will respond violently on a wider variety of issues. There is a reason why no one ever says "the best way to deal with a bully is to immediately give him everything he wants."

This cycle is repeating today, as media outlets around the world try to justify why they are not showing the forthcoming Charlie Hebdo cover featuring the Prophet Mohammed saying "Je Suis Charlie." 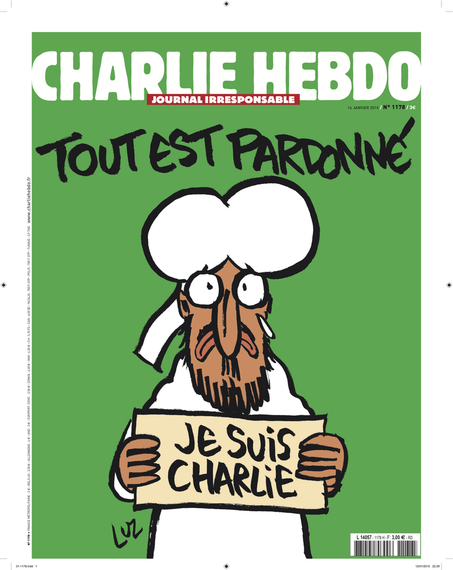 As Peter Suderman at Reason points out, this is certainly the most newsworthy cartoon of the year, and arguably one of the most important cartoons of all time. It remains to be seen who will show it, and who will make up excuses for why they will not. But every media outlet that does not run it should understand the foolishness of thinking one can discourage terrorism by granting the wishes of terrorists.