Today, my organization, the Foundation for Individual Rights in Education launched an extensive national advertising campaign highlighting five colleges that have unapologetically punished students and faculty for what should be clearly protected speech. The ad below appeared today directly adjacent to U.S. News & World Report's annual ranking of the best national colleges: 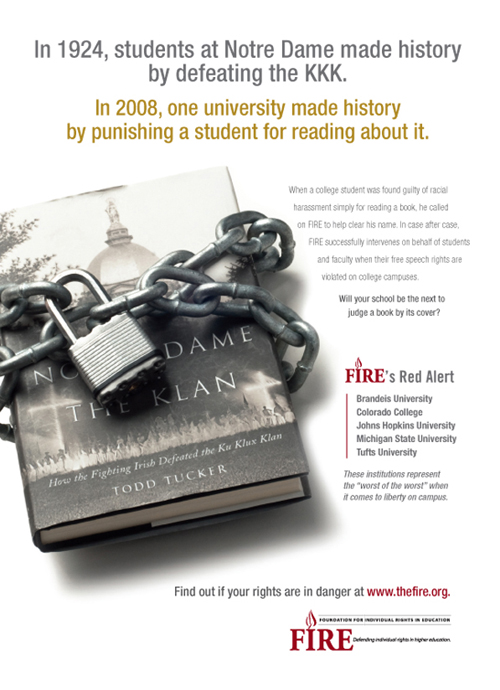 The ad focuses on the almost unbelievable tale of Keith John Sampson, a student at a college in Indiana who was punished simply for sitting at a table and quietly reading a book. For those of you who are unfamiliar with the abuses of free speech rights on college campuses, you may find this story hard to believe, but you can see it for yourself here:

Over the next few days and weeks I will be highlighting the schools on FIRE's Red Alert list. We created the Red Alert list to "honor" those schools that have not only punished students and faculty for clearly protected speech, but have continued to stand by their shameful behavior. Even under intense criticism, and in some cases even the threat of a lawsuit, these schools have stubbornly stuck to their poor decisions. This is the second year in a row that we've placed a full-page ad in U.S. News & World Report highlighting the Red Alert schools. Additionally, this year we are placing ads in U.S. News & World Report's guidebook on the nation's best colleges, in 25 college student newspapers, in each Red Alert school's student newspaper, on USNews.com, and on Facebook. We are, of course, also tweeting up a storm on Twitter.

It is my sincere hope that universities will get the message and that next year these schools will not make yet another a repeat appearance. But if Brandeis, Bucknell, Tufts, Colorado College, Michigan State, and Johns Hopkins think they can just ignore what they've done and hope that people forget, we are perfectly happy to publicly out them again in the pages of U.S. News next year.