It's January 31st and I have 15 days left to raise over $200,000. Since I began crowdfunding last month to finish my feature film FREE THE NIPPLE and launch a campaign to decriminalize the "female areola" in all 50 states, our movement was banned from Facebook, Youtube, Instagram and Google Plus. I find it really cripples your ability to raise money online without social media. And why exactly are these platforms so unilaterally threatened by a woman's nipple? I would answer that if I hadn't already written ad nauseam about my battles with censorship in my last posts, "Facebook Wages War On The Nipple" and "Why I Made A Film Called Free The Nipple And Why I'm Being Censored in America." 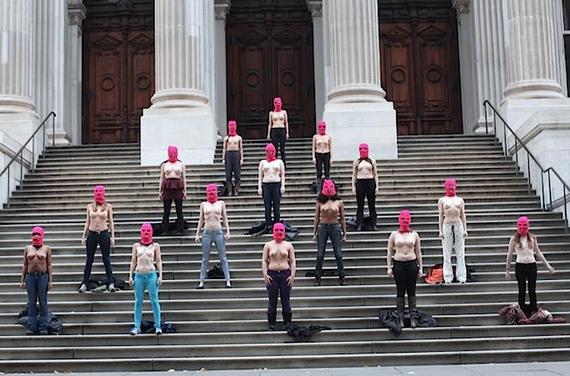 Back in October of 2012, after directing FREE THE NIPPLE straight through Hurricane Sandy in NYC, I thought I survived the worst force majeure of this process. First the ConEd power station exploded in Manhattan causing a massive blackout for days. Every subway shut down and rivers flooded the mazes of underground tunnels. Our crews waited for hours in endless lines at gas stations just so we could get the trucks to set. Trapped in a national disaster, I still had to shoot several scenes with topless women confronting the New York Police Department. It was my first indie film and after Hurricane Sandy - I thought I'd never want to make another. 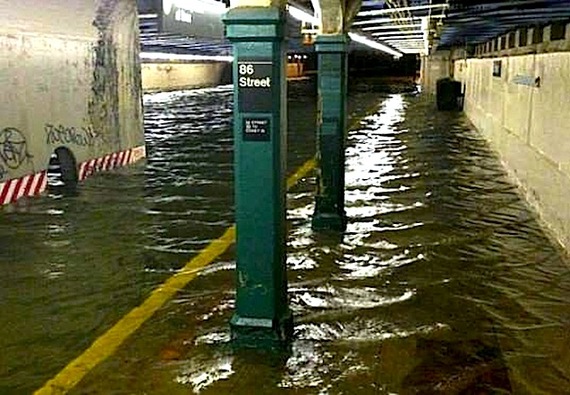 In case you're not up on the current nudity laws, today it's only legal for a woman to be topless in 13 states in the USA. The NYPD had been wrongfully arresting women for over a decade after the "female nipple" was decriminalized in the New York Supreme Court in 1992. So we took a film crew, our cast and mobs of topless activists into the streets to test the bounds of reality. Compared to the legal battles and corporate censorship I am facing presently, Hurricane Sandy seems more like a nasty molehill than the mountain I once thought it was. 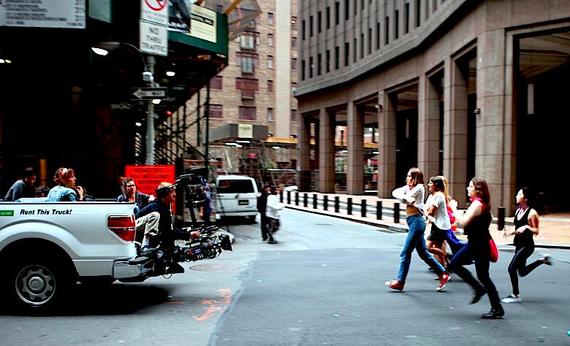 Based on real women who battled the cops and courts for their topless rights in America, FREE THE NIPPLE poses the question, "What is more obscene: violence or a nipple?" The FCC and the MPAA, who regulate all TV shows and movies in America, are often criticized for allowing toxic levels of violence in films, TV shows and video games -- while being aggressively strict on nudity and sex for our adult viewing audiences. Some blame a 300-year-old Puritanical ethic that still has a death grip on the cultural engineers of the American media. 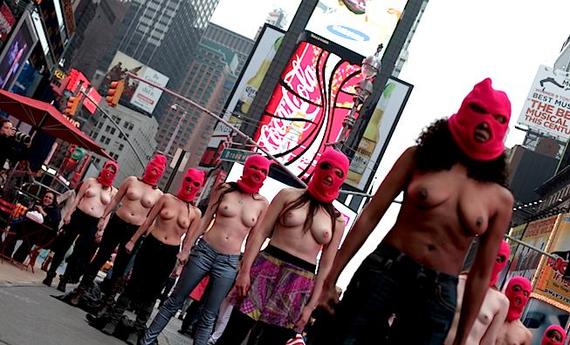 On that note, something very interesting happened in Hollywood last week. Harvey Weinstein went on Piers Morgan Live and said to the world, "I have to choose movies that aren't violent or as violent as they used to be. The change starts here. I'm not going to make some crazy action movie just to blow up people and exploit people just for the sake of making it. I can't do it. " For a man who produced and distributed some of the most graphically violent films in history, this is a tectonic shift in Hollywood thinking. When I saw the interview I felt like I was watching a very sane Howard Beale out of a scene from the film Network. 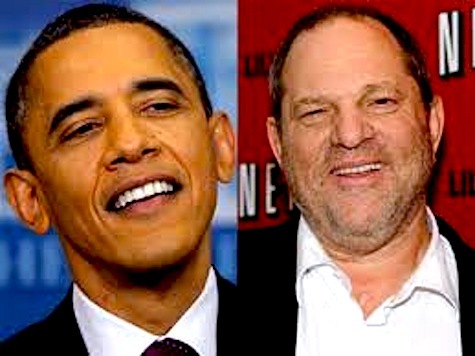 Anita Bush wrote a touching follow up article for Deadline, "Why Harvey Weinstein's Comments on Movie Violence Matter." Bush had a relative that was killed in Aurora, Colorado when a gunman shot up the movie theater with an AR-15 automatic machinegun, stealing the lives of 12 people and injuring 70 more. Coincidentally, in FREE THE NIPPLE the "inciting incident" for the main character's journey occurs as she witnesses the Aurora shooting unfolding on live TV. Bush's article also recounts one of President Obama's speeches at DreamWorks in 2013 where he said to entertainment executives, "'We got to make sure we are not glorifying it.' Violence in video games needs to be addressed. Which is about the only thing that leaders of the National Rifle Association agree with Obama on."

I don't know the deadly recipe of cultural factors that gives birth to so much gun violence in America. I do know the US possesses more guns per capita then any other developed country on earth. I know over 30,000 people die annually from guns in the US. That translates to three deaths every hour or nearly 90 gun fatalities every day in America. And the reason there's so much glorified violence in TV, films and video games is simple...violence is a mega-industry that brings in massive profits for the shareholders of the major film and TV studios.

Box office sales for the US and Canada reached $10.8 billon for 2013 and the two highest grossing films were Hunger Games: Catching Fire and Iron Man 3. Global video game sales were over $67 billion in 2012. And according to Caroline Knorr editor for Common Sense Media,"90% of movies, 68% of video games, and 60% of TV shows, show depictions of violence," When you eyeball the math, you don't have to be in Mensa to realize why PG-13 films have more violence in them today than R rated films. When in doubt, follow the money.

Now Weinstein is picking a public fight with the NRA with his film, The Senator's Wife that digs under the fingernails of the NRA's legislative juggernaut -- who Weinstein blames for impeding any progress towards stricter gun control. With decades of relationships in Hollywood, it'd be surprising if Harvey's personal evolution doesn't influence studios and filmmakers to create less toxic images of violence for children. Who knows maybe he'll inspire a movement to re-tool the MPAA to create a more balanced ratings system as his legacy. 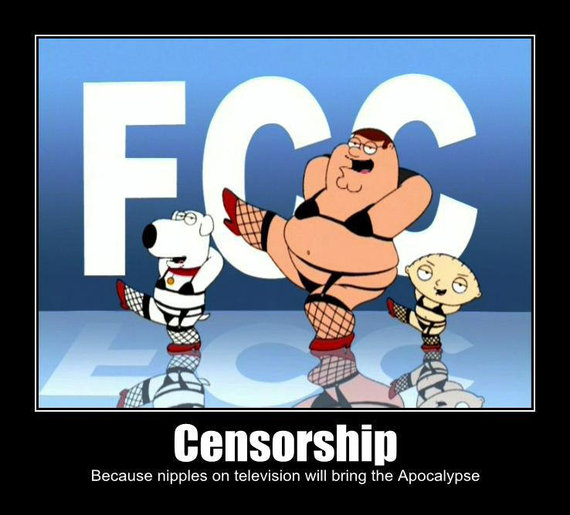 Unlike the MPAA, European ratings boards in general are much harsher on violence than they are on nudity and sex. I love good actions films and even violent films. I even believe there is a place for showing the horrors of violence like police brutality, genocide or war crimes, if it is a means to ending the horror. However, I also believe there is room in America for "female nipples" on public beaches, Facebook, Instagram, Youtube and even on network TV one day.

Mahatma Gandhi, who defeated the British Empire without firing a single bullet, used to say something to the effect of, "First they ignore you, then they laugh at you, then they fight you, and then you win." Well they're fighting us. That's for sure. So according to Gandhi's theory we're close to winning. I do not envision a society where women walk the streets topless across the country. I just want cops to stop arresting women for breastfeeding or lying topless on a beach. I don't want any part of my body to be considered obscene or criminal, and I believe these censorship laws cause more serious problems then they solve.

With only two weeks left to raise enough funds to finish the film and launch a national campaign to free the "female nipple" in America, we are throwing a FREE THE NIPPLE event in Manhattan on Feb. 4th, 2014. We have teamed up with We Are The XX, a 21st Century movement that celebrates content that captures feminism as expressed by both male and female Generation Y leaders. If you want to support FREE THE NIPPLE or contact us directly goto: www.Fundanything.com/freethenipple to end gender inequality in America.

Lastly, I'd like to reach out to Aaron Warnick who recently wrote an article about FREE THE NIPPLE that inspired my blog, "Social Equality Movement Brought About By 'Free The Nipple.'" A lot of people who contact me think this is solely a woman's cause. It's not. So many men have supported us in the press and at very high levels with the campaign. This is not your 1960's feminism. This is not about burning bras or hating on men. This film and movement are simply about freedom. Maybe I've gone mad, but wasn't freedom the governing principal that America was founded on -- or have our legislators lost the plot?