On December 19, 1957, a con artist posing as a traveling salesman began to worm his way into the hearts of millions of Americans. The protagonist of Meredith Willson's hit show (The Music Man), Professor Harold Hill had been running a pretty profitable scam selling musical instruments and marching band uniforms to people in small towns and then absconding with their money.

When the law finally caught up with him in River City, Iowa, Professor Hill was saved by a bunch of young boys with no musical skill who followed his advice to use "the Think method" when attempting to play their instruments. The exultant reactions of their doting parents saved the day.

When Tom Hanks accepted his first Academy Award for Best Actor on March 21, 1994 (in recognition of his performance in the film Philadelphia), he made a point of thanking his drama coach at Oakland's Skyline High School, Raleigh Farnsworth, Two decades later, The New York Times published a moving Op-Ed piece entitled I Owe It All To Community College, in which Hanks (who had recently been inducted as a Kennedy Center honoree) described how his experiences at Chabot Community College helped point his way toward a career in the arts. The Tony Awards (in partnership with Carnegie-Mellon University) recently announced a new award category for Excellence in Theatre Education.

In January, as he prepared for his 2015 State of the Union address, President Barack Obama announced his plan to make the first two years of community college tuition-free. But, in an article published in The Contra Costa Times describing the Contra Costa County school board's unanimous decision to reject a proposal for a county-wide performing arts charter school, Theresa Harrington noted the suggestion by school board President Daniel Gomes that the creation of charter schools with an emphasis on teaching either environmental science or robotics might have a greater urgency than a school for the arts.

"These are programs that are vital to our society. It's well and good that performing arts are part of our society, but they're not the vital part of our society," said Gomes, who stressed that the county's trustees could be "wasting money and wasting time -- and we might be wasting lives by supporting this."

According to Harrington, one of the proposed charter school's supporters, Rob Seitelman, yelled: "That's how I want to waste my life -- supporting the arts!" Seitelman's battle cry has taken on numerous forms over the years.

Despite countless studies which show the power of arts programs to stimulate local economies, the surprising numbers of jobs generated by the arts, and the critical role of the arts in reviving neighborhoods that have been abandoned and fallen into decay, many politicians fail to understand the role the arts play as an spiritual, emotional, economic, and professional lifeline to those in need of help.

A lovely description of the power and importance of storytelling, isn't it? 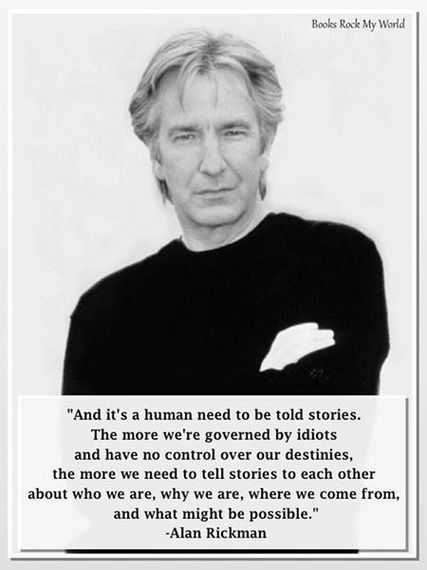 Two new documentaries focus on the power of the arts to inspire people in ways that have absolutely nothing to do with "pulling yourself up by your bootstraps." Instead, they show how the arts can give disadvantaged youth (as well as women struggling to make a place for themselves in a male-dominated profession) hope for brighter futures and more meaningful lives.

Aided by financial backing from the San Francisco Film Society and the Berkeley Film Foundation, filmmakers David Collier and Suzanne LaFetra have crafted a poignant documentary about the impact of the arts on the lives of underprivileged youth in FREE. Set in Oakland, California, with a particular focus on the work being done at the Destiny Arts Center, their film (which was screened at the 2015 SFIndie Fest) follows the trials and tribulations of five disadvantaged teens who struggle to remain emotionally grounded while attempting to write, design, and perform a musical program which helps them share their life experiences with others. 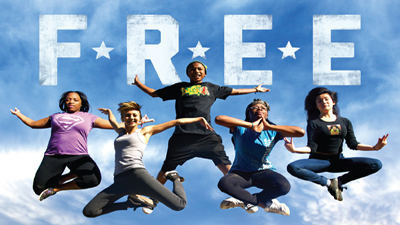 The underlying motivation for the group's creative output is a chance to open up about some of the painful truths they have been concealing (whether those truths involve gang violence, sexual abuse, poverty, being diagnosed with HIV) or the daily insults and traumas of life. The five teens featured in FREE include: 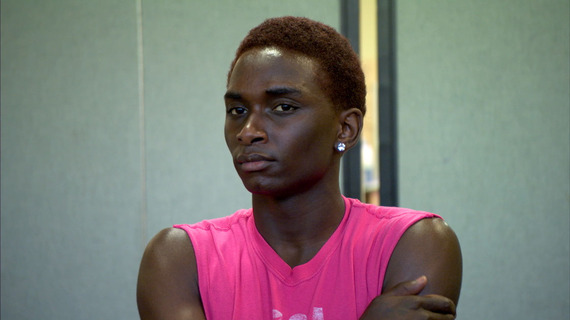 Omar temporarily dropped out of the Destiny Arts Center's
dance program after he was diagnosed with HIV.

For many teens, trust is a huge and very painful issue.

Unlike many documentaries that examine the impact of the arts in school programs, FREE does not involve any kind of competition or elimination process. Instead, it follows students through a year's worth of coaching, nurturing, introspection, and rehearsal leading up to the group's final performance as the Destiny Arts Center's artistic director, Sarah Crowell, tries to provide a safe space for students to digest the world around them "so that they can come through adolescence shiny, and not broken."

FREE is not about the most gifted, most adored, or most popular children getting to star in their annual school play. It's about teens who have already experienced the school of hard knocks learning how to use their creativity as a tool with which to learn about themselves, build enough confidence to embrace future opportunities and, hopefully, begin to heal from some deep emotional wounds. Here's the trailer:

One might wonder how a Spanish-language film about female mariachi performers in Mexico City might end up on the program of a German film festival like Berlin and Beyond. The simple answer is that the filmmaker, Doris Dorrie, is German and This Lovely Shitty Life is a touching documentary that salutes the proud Mexican women who have been crashing the macho field of mariachi music in recent decades.

When mariachi musicians are booked for important gigs, the joy they bring to audiences is almost palpable, As part of its community outreach program, the Houston Grand Opera commissioned composer José "Pepe" Martínez and librettist Leonard Foglia to create Cruzar la Cara de la Luna / To Cross the Face of the Moon (the world's first mariachi opera, which had its world premiere in Houston in 2010). Following its world premiere at the Lyric Opera of Chicago in March, the team's second mariachi opera (El Pasado Nunca Se Termina/The Past Is Never Finished) will be performed in Houston in May of 2015.

If you're new to the sounds of mariachi, you'll be fascinated by the gutsy vitality of this genre of folk music, as well as Mexico City's street musicians (who can often be seen hustling gigs in downtown's busy Plaza Garibaldi). 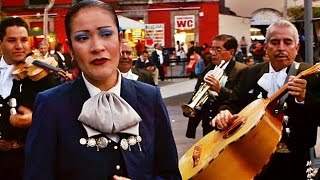 The hustling isn't always lucrative for those who get paid roughly 10 cents per musician per song (a rainy day can quickly wipe out one's anticipated earnings). Whether performing for lovers, funerals, weddings, or special events like Dia de los Muertes (Day of the Dead), many of the selections are chosen by request from those willing to pay the musicians. 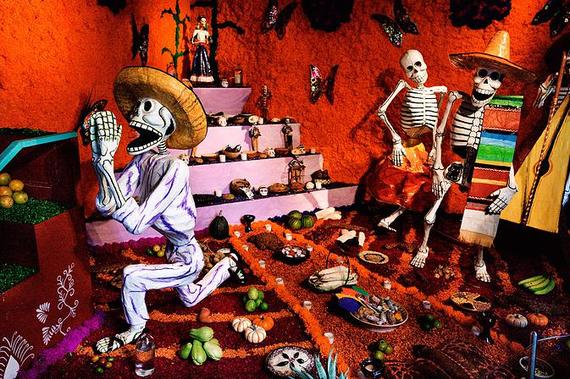 Dorrie and her crew interview several female mariachi performers to learn how their artistic ambitions have impacted their family life. In some cases, a mariacha's father or uncle had been a mariachi performer and, because they loved the music, they had learned many of the popular songs early in their childhood. In other cases, mariachi has become a burning passion, a creative outlet which they simply cannot afford to ignore.

Formed in 1958, the first women's mariachi band still performs on a regular basis. For me, the most interesting parts of Dorrie's documentary are the footage of the older members of Las Pioneras de Mexico, an all-female ensemble that has performed in and around Mexico City for several decades. While some went on temporary leave to raise their children, they always look forward to new bookings and opportunities to perform. Once they take the stage, their performances can be thrilling. 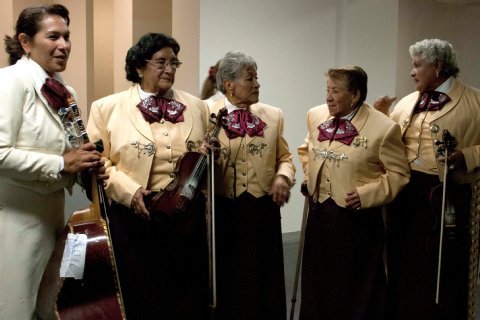 Bottom line? If you like mariachi music, you're going to love This Lovely, Shitty Life Here's the trailer: