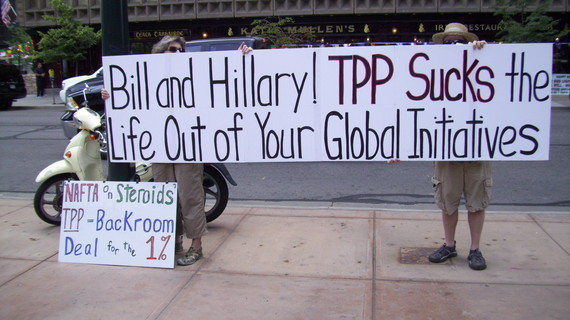 Just as President Bill Clinton promoted NAFTA in the '90s, proclaiming it the precursor to reduced deficits and increased jobs, in a 2012 appearance in Hanoi then-Secretary of State Hillary Clinton pitched the Trans-Pacific Partnership, invoking lower trade barriers, and improved labor conditions and environmental protections. Twenty years after President Clinton signed the NAFTA trade treaty, Global Trade Watch reports a 450 percent increase in the U.S. trade deficit, resulting in the export of almost one million jobs, and downward pressure on wages.

Conflicts Between Free Trade and a Recovering Middle Class

The Washington ruling class often speak out of both sides of their mouths. The political focus in 2015 has shifted abruptly, in word if not in deed, to the middle class. That beleaguered segment, largely ignored for decades, became a central talking point in the president's State of the Union address, attended by a number of invited working people. Even Republican presidential candidates are giving lip service to the lower economic class, though they have long cloaked issues of economic benefits for the wealthy with the pretense of concern for the middle class, e.g., progressive taxation of all wealth, including capital gains, will "hurt working families."

Even as they commiserate with the middle class, corporate Republicans and Democrats are poised to get behind another "free trade" deal that would hold U.S. democracy, taxpayers and workers for ransom.

President Obama's State of the Union conveyed conflicting messages. A main theme of the address was growing wealth inequity, the need for the wealthy to pay their fair share of taxes, and the economically depressed middle class. Such admirable intent was negated when he urged both parties to "give me trade promotion authority to protect American workers, with strong new trade deals from Asia to Europe that aren't just free, but fair."

Urging bipartisan support for Trade Promotion Authority, a "fast track" bill to bypass constitutional congressional oversight and speed passage of the secretive Trans Pacific Partnership trade deal (more far-reaching than NAFTA and bound to further undermine jobs and manufacturing) the president telegraphed his support of the corporate agenda. Only five of 29 chapters of the TPP have anything to do with trade; the remainder amount to a huge corporate power grab.

While he acknowledged that "past trade deals haven't always lived up to the hype," President Obama cloaked the intent of passing yet another trade deal written in secret by hundreds of corporate lobbyists, in language that asserted "protection" of and "fairness" to American workers and small businesses. Indeed, workers and small businesses have been particularly crushed under "free trade" deals that masquerade as populist, but are still more corporate giveaways.

Also contradicted by Obama's promotion of global trade agreements is his expressed sympathy for undocumented immigrants and immigrant children. Author and journalist David Bacon notes that such trade agreements have consistently established economic rules and relationships for the benefit of large corporations and investors, while exacerbating conditions of poverty - low wages, high unemployment, export of jobs, privatization, and the destruction of unions. The ultimate effect is displacement of populations, forced to migrate elsewhere for work. He observes that since the 1994 passage of NAFTA, the number of Mexican migrants in the U.S. has swollen from 4 and a half million to over 12 million today. With still more "free trade" agreements on the horizon like the Trans-Atlantic Partnership and Trans-Pacific Partnership, Bacon sees scarce chance that real sources of poverty and immigration will be addressed.

As described by Professor of Economics Bill Black, so-called free trade deals do the opposite of what is promised - draining jobs, exacerbating wealth inequity, gutting the middle class and increasing U.S. trade deficits. Drafted in secret by lobbyists to the largest corporations and trade associations, whose identities remain unknown, such trade deals are written for the benefit of corporations' bottom lines, at the expense of people's safety, health and democracy. The public and congress members are routinely denied access to content. Black calls the process "an outrage of democratic government."

Bipartisan Betrayal of the People

In the wake of the 2014 elections, some perceive that many in the Republican-controlled congress are eager to achieve corporate goals, such as passage of "free trade" agreements. For all of their animus toward President Obama and consequent congressional inaction, majority leader Sen. Mitch McConnell (R-Ky) and house speaker Rep. John Boehner have cited trade as one area where the Republican congressional majority is willing to work with the president. The new Senate Finance Committee chair, Rep. Orrin Hatch (R-Ut) has already co-sponsored a Fast Track Trade Promotion Authority bill that would expedite passage of the Trans-Pacific Partnership (TPP) and bypass constitutional congressional oversight. In a January 27 hearing before Hatch's committee, U.S. Trade Representative Michael Froman testified for the TPP, interrupted by protestors urging truth-telling about the deal.

Expressing alignment with corporate Republicans on the trade pact, President Obama has proclaimed the TPP "the model for trade in the 21st century." The TPP encompasses much of Asia. The Trans-Atlantic Trade and Investment Partnership (TAFTA) is the European version of the TPP.

Harper's Magazine publisher John R. MacArthur observes that the Democratic Party has essentially abandoned its historical role as champions of workers, and instead has moved to the right, even as the political center has moved far to the right. Consequently, both Presidents Clinton and Obama have aligned themselves with Wall St., corporate profits, the exportation of jobs, and so-called "free trade" agreements like the TPP.

Negotiated with 12 Pacific Rim nations (with more projected to be added) the TPP is said to cover 40 percent of global trade, dwarfing the effects of the North American Free Trade Agreement (NAFTA), CAFTA, the Permanent Normalized Trade Agreement with China (PNTR), and the most recent South Korean trade pact - all contributing to massive job and manufacturing losses, expanding wealth inequality and growing U.S. trade deficits. Promoted by and for the elite, "free trade" deals since NAFTA have seen the share of national income to the richest 10 percent rise by 24 percent, to the top 1 percent, by 58 percent.

Observed Bill Moyers, "The post-NAFTA era has been marked by growing inequality, declining job security and new leverage for corporations to attack government regulations enacted in the public interest.

Sen. Bernie Sanders describes the TPP as "part of a global race to the bottom to boost the profits of large corporations and Wall St. by outsourcing jobs; undercutting worker rights; dismantling labor, environmental, health, food safety and financial laws." The trade deal would also free banksters from oversight; pad the bottom line of pharmaceutical companies by extending patents and consequently reducing access to medications worldwide; ban Buy American policies needed to create green jobs and rebuild our economy; and invite more unsafe foods and products into the U.S.

The White House Office of the Press Secretary has done its part to corrupt dialogue around the Trans Pacific Partnership, ironically pushing "bipartisan trade promotion authority to protect our workers, protect our environment, and open new markets to new goods stamped 'Made in the USA.'"

When bothering to mention the Trans Pacific Partnership, media almost always names it a beneficial "free-trade pact." CBS News hails the prospective of "fast-track authority to jump-start negotiations, to open a Japanese agriculture market "worth $12 billion" to the U.S. The "free-trade pact," they say, "could transform agriculture" in Japan, which they judge, is "now dominated by tiny, inefficient farmers."

Corporate media invariably quotes a corporate shill, like the U.S. Chamber of Commerce praising NAFTA as a precursor to the TPP. In one-sided reporting, CBS News quotes the U.S. Chamber of Commerce which contends that NAFTA has generated "vast new opportunities for U.S. workers, farmers, consumers and businesses... and trade with Canada and Mexico supports tens of thousands of jobs in each of the 50 states."

Contrast those U.S. "news" reports with David Bacon's frank assessment of NAFTA, a deal that only a venal corporation could love:

For starters, NAFTA permitted U.S. corporations - Archer Daniels Midland, Continental Grain Company, Cargill - to dump U.S.-subsidized corn onto the Mexican market, putting Mexican growers out of business. Bacon relates that NAFTA also led to the privatization of Mexican state-owned enterprises, resulting in the loss of hundreds of thousands of jobs. The Mexican railway system was privatized, costing tens of thousands of Mexicans jobs after it was taken over by a U.S. company. The Mexican government privatized the power and light company in central Mexico, dissolving the company, firing its 44,000 employees and destroying their union, effectively setting it up for ultimate purchase by a foreign company. Consequent to destruction of the union came lower wages and deteriorating working conditions. Wreaking disastrous effects on Mexico's poor, the only beneficiaries were U.S. and European corporations and Mexico's wealthy elite.

Among many onerous aspects of trade agreements like the Trans-Pacific Partnership are the ISDS, Investor State Dispute Settlement features. Defined as a special legal right exercised only by multinational corporations and those who invest in a foreign country, ISDS grants them unadulterated power to undermine democracy and challenge any domestic law, regulation (related to health, environment, labor, food safety, etc.) judicial or administrative ruling or government decision they dislike that could allegedly impact their "expected future profits" in any country where they do business.

Foreign investors have challenged anything from "plain packaging rules for cigarettes to denials of permits for toxic waste dumps to increases in the minimum wage." Merely threatening a case may prompt the withdrawal of a law or regulation, due to the legal costs of defense. Challenges may be brought in international tribunals, bypassing the U.S. court system, before a panel of private 'arbitrators' who are not democratically elected or appointed, and are not subject to stringent conflict of interest rules - often corporate lawyers. Tribunals may require taxpayer compensation to corporations for their alleged lost profits.

Pending claims based on past trade agreements amount to over $14 billion, most challenging environmental laws in a number of countries. Claims against governments brought by multinational corporations include: Metaclad, a U.S. corporation was awarded more than $15 million when they sued the Mexican federal government over a local government's decision to deny a permit to operate a toxic waste dump. A French company is suing Egypt over a number of labor market measures, including an increase in the minimum wage. A Swedish corporation is suing Germany over its decision to phase out nuclear power, and Ecuador was ordered to pay more than $2 billion to Occidental Petroleum.

So many reasons this trade deal is toxic and should be scuttled. Our legislators deserve lots of phone calls, saying "No" to a fast track bill for another bad trade deal - expect it to be pushed at any time by corporate lobbyists and their congressional advocates. Instead of corporations, trade deals should serve the people and create well-paying jobs. A toll-free number connects to any congress member: 1-866-338-1015.