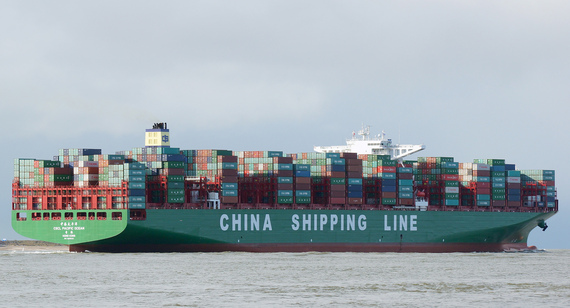 Shopping at your local supermarket is like touring the world without leaving your neighborhood. There's seafood netted in the South China Sea, wine from Chile, licorice from Australia, produce from India, and store-brand products from who knows where. Cheap labor abroad plus modern shipping equals yummy, affordable groceries in our baskets.

This cornucopia is a testament to the American love affair with free trade, the cornerstone of global economic growth. Support for free trade policies has been an article of faith in American politics for the last two decades, opposed only by a labor movement in decline, a few environmental groups, and anti-globalization activists who cut their teeth fighting the North American Free Trade Agreement and the creation of the World Trade Organization.

Yet as we grapple with runaway fossil fuel emissions that are changing the climate and creating a warmer, more acidic ocean, it might be worth testing that faith -- particularly as the latest free trade pact, the Trans-Pacific Partnership, heads to Congress for approval. After all, there is a direct connection between the energy that powers international trade and the carbon that's accumulating in our atmosphere and seas.

Early free trade agreements like NAFTA- ironically signed in 1992, the same year as the Rio Declaration, the first international pledge to address climate change - were as bad for the environment as they were for the American manufacturing base. As writer Naomi Klein discusses in This Changes Everything, free trade rules have been used to scuttle huge renewable energy projects and programs that encourage locally based economies all over the world - the very things we must promote to reduce our carbon emissions -- all of which get deemed illegal protectionism that violates free trade agreements.

To be fair, the TPP is an improvement on early free trade deals. It includes environmental violations in the main agreement (rather than an unenforceable side agreement, as with NAFTA), making them subject to the same dispute settlement process as other trade violations. It also has policies that explicitly address destructive fishing practices in member countries and crack down on the illegal trade of goods from protected wildlife, such as the ivory trade, although its enforcement provisions are weak and full of loopholes.

But the TPP - which doesn't include the words "climate change" or even "carbon" -- would also exacerbate climate change and ocean acidification in a variety of ways. For example, it would allow the 11 other countries in the pact to begin importing natural gas from the United States, fueling the domestic fracking boom that is polluting our water and contributing to global warming with unregulated releases of methane, a powerful greenhouse gas.

On a more basic level, the TPP reinforces the economic colonialism of free trade - allowing corporations to exploit the cheapest labor and natural resources without tariffs, and shipping goods around the world that could be produced locally - unnecessarily lengthening supply chains and burning more carbon, which itself is problematic in a warming world with acidifying oceans.

International shipping uses cheap and dirty bunker fuel - essentially the gunk left over when oil is refined -- that fouls the air and water. In 2012, it produced nearly a billion tons of carbon dioxide emissions, or about 2.2 percent of the worldwide total. That carbon pollution is rising rapidly along with free trade policies, doubling since 1990 and projected to increase by up to 250 percent by 2050, bringing it to as much as 14 percent of total emissions. And that's not even counting the 10 percent of international trade that happens by aviation, an industry that accounts for almost 5 percent of total greenhouse gas emissions and is projected to triple by 2050.

Yet climate scientists say that sharp increase in emissions simply can't happen if we expect to keep global warming under 2 degrees Celsius, after which the impacts to our climate and ocean between dangerously unpredictable. Instead, they say shipping emissions must drop to 1990 levels by 2050. Trade groups say slower speeds, new ship designs, and alternative energy sources could help, but that doesn't address the more fundamental problem.

The free trade paradigm has driven the export of U.S. manufacturing jobs to other countries, predominantly China, which is the world's leading emitter of greenhouse gases. In outsourcing production jobs, the U.S. also outsources its carbon emissions. The Global Carbon Project last year found that almost all the U.S. emissions reductions since 1990 have resulted from outsourcing production to countries like China, where production-related emissions are rising faster than consumption-related emissions, even though it's the world's most populous country. And those emissions transfers are increasing at 11 percent per year, largely because of free trade policies, a source of global warming that is barely being addressed in the negotiations leading up the Paris climate talks next month.

It isn't just carbon emissions that are being fueled by consumption in the U.S. and other wealthy countries. We create the demand that causes other countries to produce all those throwaway plastic products and packaging now swirling in the North Pacific Gyre, the biggest garbage dump in the world, collecting toxins along the way and sending them up the aquatic food chain. And international trade has spread invasive species (such as zebra mussels, cholera, and toxic algae blooms) around the world, traveling in the ballast water of ships and colonizing foreign lands, where they compromise biodiversity and clog up intake pipes and other vital infrastructure.

In an era when we're having trouble breaking our fossil fuel addiction despite its damage to our planet, when our ocean is becoming more polluted and corrosive, and we're rapidly losing the biodiversity on which healthy ecosystems rely, it's worth reexamining our assumptions about the value of free trade.

With almost half of our carbon emissions and over 90 percent of our planet's warming being absorbed by the ocean, the ships that criss-cross our planet everyday may be carrying more than we're bargaining for. So the cheap goods on our grocery store shelves might not be such a good deal after all.