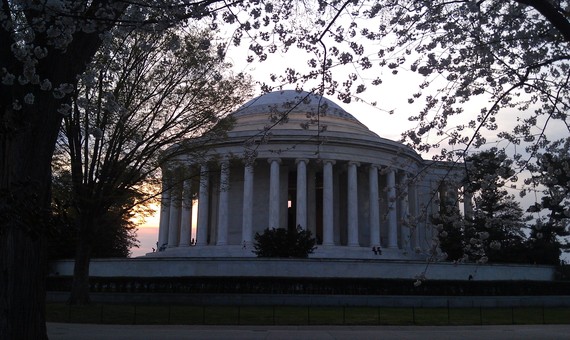 Much blood has been shed during human history in the name of religion. Thomas Jefferson (1743-1826) knew this all too well. Here are Jefferson's very words: "Millions of innocent men, women, and children, since the introduction of Christianity, have been burnt, tortured, fined, and imprisoned" ("Notes on the State of Virginia, Query XVII," 1781-1782). It is useful to recount a few such incidents which occurred during periods prior to Jefferson, some of which he may very well have had in mind. John Hus (1369-1415) was a Czech Priest, but he had been critical of the Church, especially the perceived moral failings of some of the Church's clerics. In addition, his views on Holy Communion were different from the established doctrines of the Church. And he was candid about being displeased with the Church's use of Indulgences. For such things, John Hus was summoned to appear before the Council of Constance (in 1415). Emperor Sigismund had given Hus a guarantee of safe conduct for the Council. But at the Council, he was condemned and then summarily burned at the stake.

But there is more. At this same Council, the views of the English Churchman and Oxford teacher John Wycliffe (ca. 1320-1384) were also condemned. Wycliffe was deceased, though, having died peacefully around thirty years before the Council of Constance. But he had been buried in a Church Cemetery, so the Council decreed that Wycliffe's body should be exhumed. And in time his remains were exhumed (in 1428), and then callously thrown into the Swift River. Or again, the great reformer John Calvin (1509-1564) is famous for offering sanctuary to the Spanish physician and theologian Michael Servetus (1511-1553) because Servetus was fleeing from the Roman Catholic Inquisition. But after the arrival of Servetus in Geneva, John Calvin soon had him burned at the stake, because Calvin was displeased that Servetus did not accept the doctrine of the Trinity. Of course, on a much larger scale, the European Thirty Years' War (1618-1648) was a bloodbath anchored in religious garb, leaving in its wake some eight million dead. It is not surprising, therefore, that Thomas Jefferson wished for freedom of religion to be the law of the land in the United States.

But that is not the conclusion of his epitaph. Here are the words that immediately follow: Author of "the Statute of Virginia for Religious Freedom." This document was drafted the year after the Declaration of Independence (i.e., in 1777). It is a particularly powerful, moving document as well. Here are some of the most poignant and direct words from that foundational document: "Be it enacted by General Assembly that no man shall be compelled to frequent or support any religious worship, place, or ministry whatsoever, nor shall be enforced, restrained, molested, or burthened in his body or goods, nor shall otherwise suffer on account of his religious opinions or belief, but that all men shall be free to profess, and by argument to maintain, their opinions in matters of Religion, and that the same shall in no wise diminish, enlarge or affect their civil capacities." Obviously, Thomas Jefferson believed that someone's religious beliefs were a matter of conscience, and he believed that coercion should never be part of the equation.

Jefferson fleshed out his views about religious freedom in even more concrete form just four or five years later. Here are some of his most candid statements: "It does me no injury for my neighbor to say there are twenty gods, or no god. It neither picks my pocket nor breaks my leg" ("Notes on the State of Virginia, Query XVII," dating to 1781-1782). I have long marveled at those two sentences. After all, with those words, Jefferson proclaims that polytheism and atheism, and everything in between, are all acceptable positions for the citizens of Virginia. For Thomas Jefferson, religion is a matter of conscience and so long as it is not "injurious to others" (a phrase he uses in the same context), religion is not something with which the government should be concerned.

The Constitution of the United States was penned some five years later, and the First Amendment to the Constitution has language that embraces Jefferson's stance on the freedom of religion. Here are those immortal words: "Congress shall make no law respecting an establishment of religion, or prohibiting the free exercise thereof" (1787). Later, after being elected to the Presidency of the United States, during Thomas Jefferson's First Inaugural Address (on March 4, 1801), he uttered these potent words: "It is proper that you should understand what I deem the essential principles of our Government, and consequently those which ought to shape its Administration." Then, within the list of essential principles are the words "freedom of religion." Similarly, in Jefferson's discussions of the University of Virginia (which he founded, which is the third notation of his epitaph), he notes that the Constitution of the United States "places all sects of religion on an equal footing" (August 4, 1818).

It will come as no surprise that Thomas Jefferson was criticized in his own day for his views of religion, including his belief in the freedom of religion. For example, at one point a certain Mrs. Samuel H. Smith wrote a letter to him about such matters. She was someone whom he knew from societal events in Washington as well as from a prior visit of hers to Monticello. From Jefferson's letter of response to her (sent from Monticello, and dated August 6, 1816), it is apparent that she had heard something about Jefferson's views of religion that disturbed her and she seems to have suggested in her letter that his later views are different from his earlier views. Jefferson's letter of reply is warm, but he seems to bristle slightly at times in his response. He tells her that there have been no changes. Then he writes: "the priests indeed have heretofore thought proper to ascribe to me religious, or rather anti-religious sentiments, of their own fabric, but such as soothed their resentments against the act of Virginia for establishing religious freedom. They wished him [i.e., Jefferson] to be thought atheist, deist, or devil, who could advocate freedom from their religious dictations." He goes on to state that "I have ever thought religion a concern purely between our God and our consciences, for which we were accountable to him...I never told my own religion, nor scrutinized that of another." And then he states that "I have ever judged of the religion of others by their lives....For it is in our lives, and not from our words, that our religion must be read."

For President Thomas Jefferson, therefore, freedom of religion means freedom for all religions, not just his, not just mine, not just yours, but all religions. And Jefferson believed that polytheism, monotheism, and atheism should all be placed on equal footing in the eyes of the government. None of these is to be privileged by the government and none is to be penalized by the government. All are to be equally acceptable in the eyes of the law. Finally, and of paramount importance, Jefferson believed that the measure that is to be used for all of us is our lives, not our words. Ultimately, at the end of the day, "the Sage of Monticello" still has much to teach us.

Religion Scholar, George Washington University Professor, Lecturer, Dr. Rollston holds the MA and Ph.D. from Johns Hopkins University. He is a widely-published scholar of the ancient Near East (Middle East), especially the Bible and the Qur'an.