Many are aware of a controversial part of The Vagina Monologues in which the audience is encouraged to "reclaim" a certain slur beginning with c that is sometimes used against women. Unfortunately, the idea of using derogatory words to draw attention to their effects in society has met roadblocks at two universities lately.

At Winona State University this spring, the GLBTA Partnership wanted to hold a "Day of Silence" event by positioning mannequin torsos bearing various epithets and slurs in certain locations on campus. When the GLBTA Partnership, a recognized student organization, requested official permission to hang the torsos near an outdoor gazebo, the university unreasonably denied the request due to a concern that children on campus might encounter the language:

[I]t would not be appropriate to expose children to the language written on the torsos as they are too young to understand the purpose behind your activity. 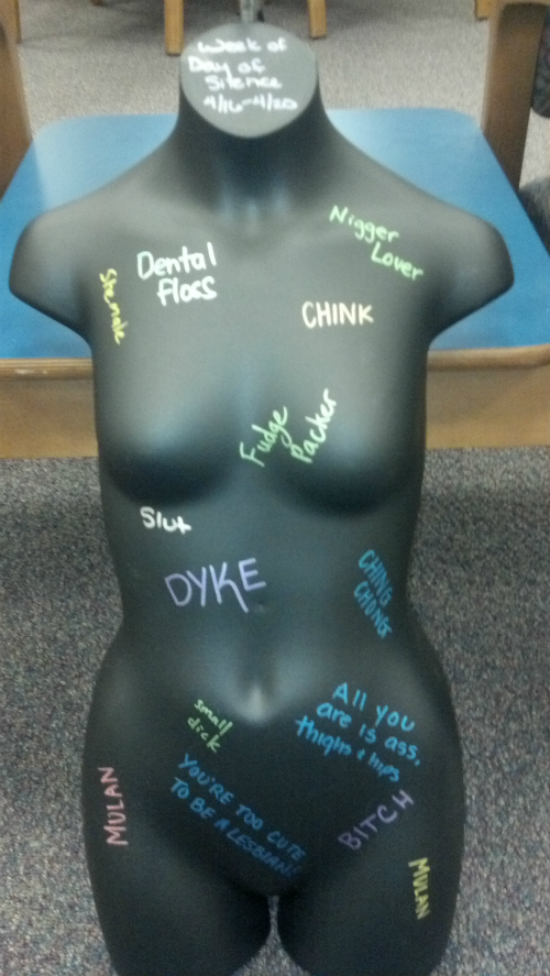 After further discussion, Winona State permitted the torsos in that area, but only between 11:00 a.m. and 2:00 p.m., which was still an unreasonable restriction. After all, a college campus is for adults. Just as it's OK for a man to wear a jacket bearing the words "Fuck the Draft" in the hallway of a public courthouse when "women and children" are present, it's OK for the student GLBTA group to exercise its free speech in public -- whether or not any juvenile passersby understand what they are seeing.

My organization, the Foundation for Individual Rights in Education (FIRE), asked Winona State to explain itself, but the university insisted that the restriction of those controversial words to three hours a day was "reasonable." It's not. In Reno v. ACLU (1997), the Supreme Court wrote:

As we have explained, the Government may not "reduc[e] the adult population ... to ... only what is fit for children." "[R]egardless of the strength of the government's interest" in protecting children, "[t]he level of discourse reaching a mailbox simply cannot be limited to that which would be suitable for a sandbox." (Footnote, citations, and internal quotation marks omitted.)

But as bad as that case was, another one this spring that treated college students like children was even worse. At East Tennessee State University (ETSU), the Student Government Association organized Civility Week, "planned specifically to cultivate a deeper understanding and value of diversity while nurturing a culture of kindness, courtesy and respect on campus." To raise awareness about Civility Week, carefully selected students were to wear T-shirts around campus, followed by a kickoff event called "The Label," billed as "an evening to talk about language and stereotypes that continue to persist and demean individuals and populations of people in our communities."

ETSU student newspaper the East Tennessean reported that the T-shirts "included a block of offensive words on the front with 'The Label:' listed above. The back of the shirt reads, 'I am more than a label,' and featured Civility Week's mantra, 'Think. Live. Respect.'" 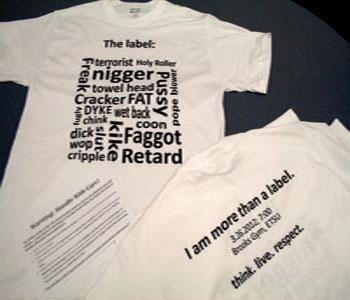 Unfortunately, university administrators intervened when they saw that the T-shirts quoted the very words the students wanted to talk about.

According to the East Tennessean, ETSU Vice Provost and Dean of Students Joe H. Sherlin, Jr., called the Student Government Association (SGA) Executive Branch to a meeting and demanded that the students limit their use of the T-shirts. After much debate, the T-shirts were limited to just four hours on one day and in one location -- from 10:00 a.m. to 2:00 p.m. at the school's Borchuck Plaza -- as well as at the 'Label' event in the evening. In addition, the administration apparently demanded that the SGA further limit the number of students who would wear the T-shirts to 150 and demanded the "return of the shirts so as to not allow one to become a 'prize' or source of humor" afterward. SGA officials were livid.

The East Tennessean makes it clear that the university sees its own students as no more than sensitive children who cannot control themselves when they see controversial words written on a T-shirt:

It was viewed by administration as an acceptable path forward. One that would limit classroom disruption and the possibility of hostility against students who choose to wear the shirts.

ETSU and Winona State are not grade schools; they are public universities bound, morally and legally, to the First Amendment guarantee of free expression. How can college students "reclaim" words and fully discuss their meanings when administrators declare these very words too scary for campus? These universities should allow adult students to freely discuss such topics. For speech to be truly free, no topic can be deemed too sensitive, controversial, or taboo.