The day after our van-load of Minnesotans got back from its "October 2011 -- Stop the Machine" occupation of Freedom Plaza, the surprising news came that Washington D.C. authorities extended organizers' permit for FOUR MORE MONTHS! This is great news as it will now give so many more people from around the country the chance to participate in (or otherwise contribute to) the historic camp-in, teach-in, music festival combined with creative efforts to educate our national politicians -- as well as apply political pressure to get them to change course -- right in the heart of Washington D.C., all in solidarity with the hundreds of other city occupations going on all over the country! 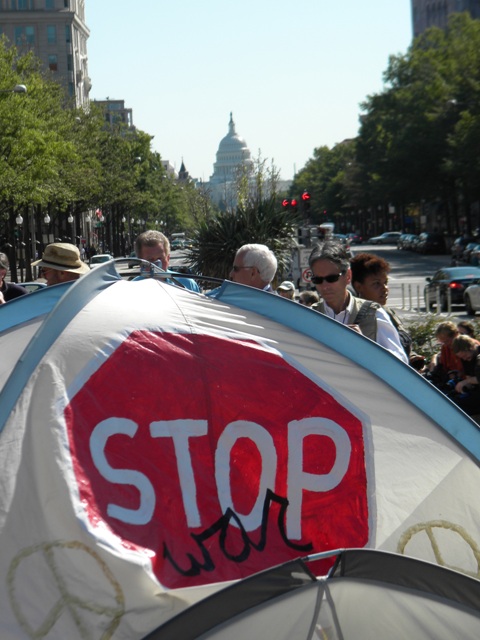 (A tiny and very corrupted Capitol lies down Pennsylvania Avenue as backdrop to our October 2011 occupation of Freedom Plaza and its "Stop War" message.) 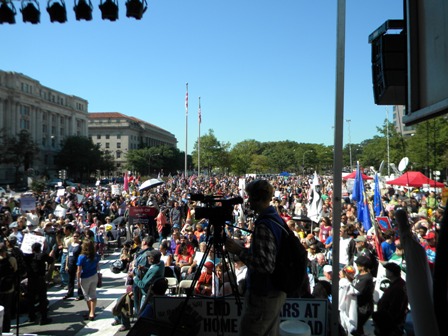 (Crowd shot from the stage during the first days of October 2011.) 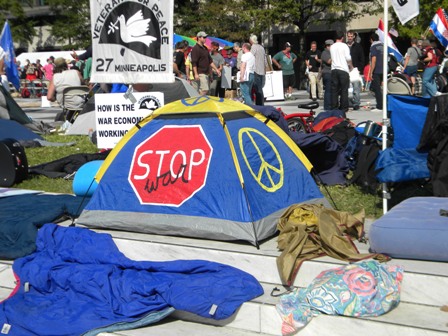 (Our Minnesotan contingent was among the first to pitch camp early on the morning of October 6, 2011.) 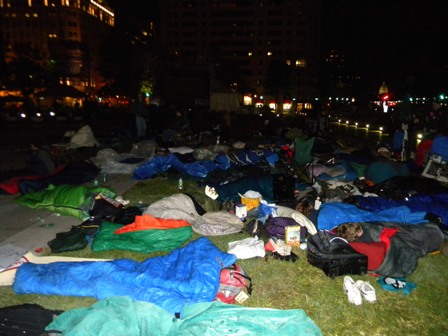 (Part of the camping scene at night on Freedom Plaza.)

Despite the Woodstock-like atmosphere, it is obviously people's misery -- actually a panoply of different miseries -- which are bringing out thousands like this in each city all over the country. Students point to loan debt while young families decry loss of jobs, homes, lack of affordable health care and decreasing educational opportunities for their children. The elderly worry more about loss of social safety nets while veterans suffer from PTSD and suicidal depression. Environmental degradation, pollution and resulting disease afflict large numbers. Pervasive malaise exists among all ages, in the sense that we've witnessed succession of the "Greatest Generation" to the "Baby Boomers" to "Generation X" to "Generation Screwed." 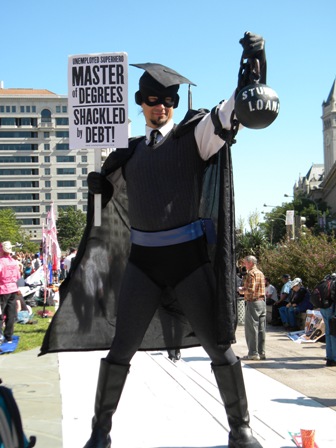 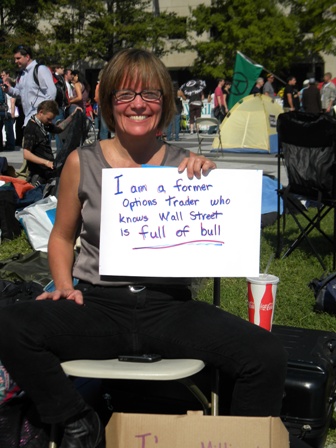 We can't and shouldn't forget, however, that the root cause of our various miseries: loss of jobs, homes, health care, loss of social safety net, educational opportunities, as well as a general economic recession and increasing homicidal and suicidal terrorism (to the point of approximately a twenty-fold increase in the level of international terrorism since 9-11) is the United States' pursuit of military empire and our country's singular reliance on war and a war economy. Military contracting is now the number one driver of the U.S. economy. No wonder things are such a mess! 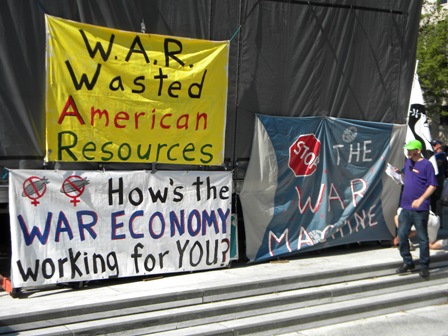 (Luckily we found a big ladder to put our banners up on the back of the stage so they could be seen for a block on Pennsylvania Avenue. )

The key would seem to lie in communicating this information to the wider public as the overriding majority of American citizens still remain ignorant about the root cause of their immediate and growing miseries. Very few are connecting the dots to grasp that we are experiencing the Sorrows of Empire that Chalmers Johnson predicted and which the CIA terms "blowback." Historians and national security experts have indeed begun to talk a good deal about this, albeit behind closed doors or in tight academic circles. But ordinary citizens have largely been kept in denial by their leaders (of both major political parties) about the root causes of their suffering in order to maintain public complacency and complicity with the U.S. war machine. 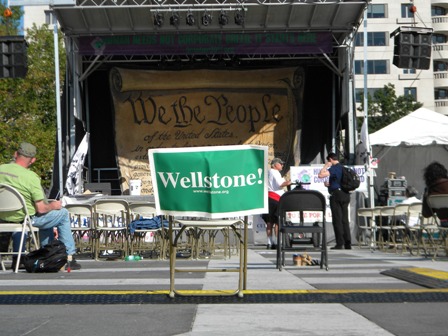 (Neither Minnesota Senator Amy Klobuchar or Al Franken dared show their faces on Freedom Plaza but we did reserve a seat for the great spirit of former Senator Paul Wellstone who always chose to stand with "We the People" and who courageously voted against giving Bush the power to wage war on Iraq despite facing a tough re-election.)

It's fine to activate people by identifying with their various miseries and, to some extent, by stoking the class warfare between the 1 percent and 99 percent, but people of all classes must be awakened, people who have mostly been sucked into supporting U.S. Empire, working in the vast pernicious tentacles of its Military Industrial Complex and "Top Secret America" national security surveillance state. More people need to realize that the U.S. decision after 9-11 to exploit its military superpower status by dominating and plundering the world, leading to singular reliance on a war economy and which has, of course, ended up killing and injuring millions of "others" in far-off places around the world and destruction of their lands, is what's leading to this blowback on ourselves here in the U.S. Historians tell us that empires almost always rot from the inside and die from their own internal corruption. Could it be that the military and war empire we are a part of is simply beginning to reap what it has sown? Let's therefore try to direct some of the energy in all the occupations, to focus not only on Wall Street and all the resulting financial and political corruption, but on explaining to the wider public, and even to the 1 percent, how such internal corruption and rot is just a part of the Sorrows of Empire. 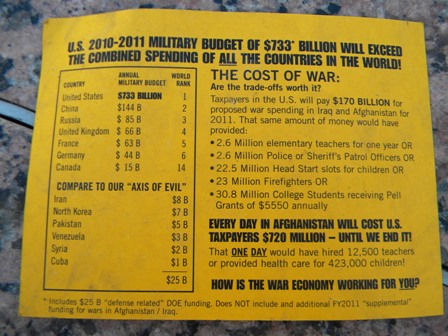 (Postcard we handed to pedestrians walking by Freedom Plaza.)