Upon the news that the Freedom Tower would be renamed the much more conventional "World Trade Center One" there has been much uproar. The New York tabloids have charged that the name change is unpatriotic, Mayor Bloomberg insists that New Yorkers will still call it Freedom Tower, like they refer to Avenue of the Americas as Sixth Avenue. In my hometown of Chicago, I suspect people have yet to start referring to the Sears Tower by whatever its name is now.

The Freedom Tower has been a storied symbol of rebuilding on the sacred ground of Ground Zero. It will have 1,776 floors to symbolize our year of independence as a nation.

Ironically, it already has become a symbol -- a symbol of all the inaction of corporate largess, greedy landlords, and egotistical developers eager to get their name on the corner stone of the new landmark. Like so much else in America since 2001, it has flourished with the housing bloodlust, and withered in the bubble burst when cash-strapped firms really didn't want to pay top dollar in huge bulk.

And while it undoubtedly shall become a national symbol, this is ultimately a neighborhood in downtown New York. While every American experienced a terrible new kind of pain on 9/11, it was a little different if you were in Manhattan and could smell it. The local New York experience of loss and destruction was compounded with the invasion of media, tourism, and opportunism.

This reached the pinnacle of disgrace at the 2004 Republican National Convention in New York. Occurring the latest a political convention had ever been held before so as to be as close as possible to the September 11th anniversary, America's Mayor Rudy Giuliani dramatically told the convention that once he realized that he was seeing bodies, not debris, falling from the flaming towers, his first response was to turn to his mobbed-up body-man Bernie Kerik and say: "Bernie, thank God that George Bush is our president."

Meanwhile that week, across the street from Ground Zero, a peaceful protest of veterans and anti-war activists were walking up the sidewalk single file, in accordance to the strict terms of their agreement with the NYPD. The police swept in with orange webbed fencing and arrested them all anyway. I was there. I filmed it. Is that the kind of freedom the Freedom Tower symbolizes?

These protesters were transferred to the West Side Highway warehouse pier that had been set up haphazardly to process and detain the over 1,800 citizens that would be arrested that week. This facility held open-air cages with oil-slicked floors and round-the-clock PA system and lights for sleep deprivation. It was soon dubbed "Guantanamo on the Hudson." The police were candid that they would be held until Bush left Manhattan after the convention ended Thursday night. In a lawsuit with the NYCLU, charges against all those arrested that week would eventually be dropped. In Times Square, I again filmed cops casting their orange web nets on a crowd, arresting as many tourists just getting out of Broadway shows on a Sunday afternoon as peaceful protesters. Is that the kind of freedom the Freedom Tower symbolizes?

Of course, "freedom" might have become a tad played-out as a stirring nomenclature.

To front on France for having the "Gaulle" to question the whole rush to war thing, Rep. Bob Ney (R-Ohio) symbolically renamed French fries and French toast "freedom fries" and "freedom toast" at the Capitol Hill cafeteria, burning France like it was 1944. As I show in my documentary FREE FOR ALL!, Bob Ney was simultaneously taking bribes and getting drunk in the morning, while authoring the devastating Help America Vote Act, which foisted electronic voting upon us as a nation and led to widespread voter disenfranchisement through provisional ballots, over one million of which were promptly discarded in the 2004 election. Bob Ney was recently released from federal prison, having served 10 months of a 30-month sentence for corruption charges. Is that the kind of freedom the Freedom Tower symbolizes?

It is also true that many of the prospective tenants felt that the name "Freedom Tower" was a little taunting to terrorists. I'm sure many Americans in that case could come up with much more in-your-face names to symbolize their feelings about terrorists, but they are not leasing space there. (Nor is anyone else, apparently, except the Chinese.) This sensitivity toward symbolism is no doubt sensitive.

You know what else would be a good symbol to our enemies who destroyed the World Trade Center? A REALLY TALL FUCKING BUILDING STANDING THERE.

Here is what is there as of this year. (You can see how the WTC site has been progressing over time from this modern guy's blog.) 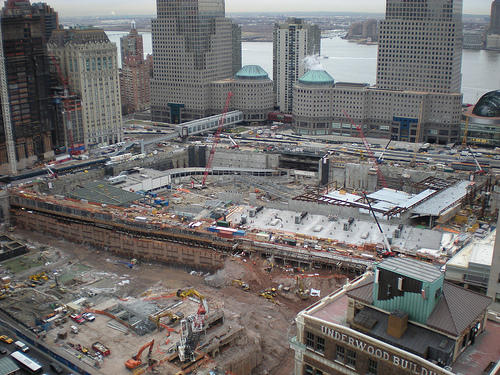 Impressively little has happened since Mayor Giuliani hastily rushed all of the debris to scrap yards out of the city, making forensic examination for remains and evidence impossible. In his bluster to clean up the site quickly, Giuliani dismissed the threat to workers at the site. It is now estimated that workers' WTC lung disease will kill more people than the original terrorist attacks.

Quite honestly, the most patriotic thing to do would have been to rebuild immediately on the WTC site to hurry up and start turning a profit again, as a capitalist "screw you" to religious fundamentalists. Vendors selling American flags, or pork on a stick (or better yet, pork on sticks with American flags), it would have been stirring.

But lost in all of this zoning out are the memorials that were decided upon by many people after an inspiring competition drew stunningly beautiful submissions from around the world. At the time, it was clear that having those built to help us come to terms with our loss was what mattered most.

I would say it still does.