Civil Rights, equality, women's rights, affordable health care and children's rights are all issues that have been important to us for our whole lives. America has travelled vast distances politically and socially since December 1, 1955 when Rosa Parks was arrested for standing up for herself on that infamous bus in Montgomery Alabama. As a nation we still have a long way to go, but we're so proud of how far we've come as Americans.

Public elementary schools are wonderful places. Children from all walks of life learning together is a beautiful environment. We've been privileged to work with kids around the United States and have observed varying teaching styles and regional flavors and, we have watched all different types of kids interacting together. We learned something early on at those schools -- we discovered that we're all the same.

We wrote the song "FREEDOM" for everyone. It's a song about Americans -- ALL Americans. It's a song for the world, it's a song for children, for dads, for mums and grandparents. It's a song for singles, gays, plumbers, teens, electricians, lawyers, writers, students, teachers, musicians, doctors, sales associates, government workers, mayors and presidents. "FREEDOM" is a song for Jews, Christians, Sikhs, Muslims, Buddhists, Jains, Hindus and Atheists.

"FREEDOM" is a song for the "everyman."

Earlier this year, when we were both bursting with pride at the recent Supreme Court decisions we decided to write a positive song to show our support for those historic decisions. Our backgrounds as teachers came through, and we asked ourselves, "What hurts kids' feelings the most and makes them feel different?" The answer was unequivocally: "The identical things that hurt adults' feelings and makes them feel different. We're all the same." Our diversity makes us interesting, debate makes us stronger but, equality permits us a level playing field.

We took a sweet and simple approach that, reminds us all to respect one another, and wrote the song "FREEDOM."

Even the blended musical styles in this song are a nod to how we can be better together. We wanted to show how immigration has brought such a unique blend of musical greatness to our country. We start with a sweet Irish influenced ballad that builds into drum driven folk rock, and finishes with a choral Gospel style crescendo. We chose Laura Sullivan, a beautiful young Grammy winning pianist from California to set the tone. We added Terry a la Berry, an incredibly talented drummer from the Arlo Guthrie band to represent Massachusetts. Tim and I have lived in Florida for many years and the Southern influences have affected Tim's guitar playing and our vocals significantly. We wrote "FREEDOM" as a tribute to America. We are a great melting pot and the landmark decisions of 2015 have turned the heat up a bit, and it was time.

Allow FREEDOM to rain down on everyone.

For more information about the Battersby Duo visit:
battersbyduo/FREEDOM 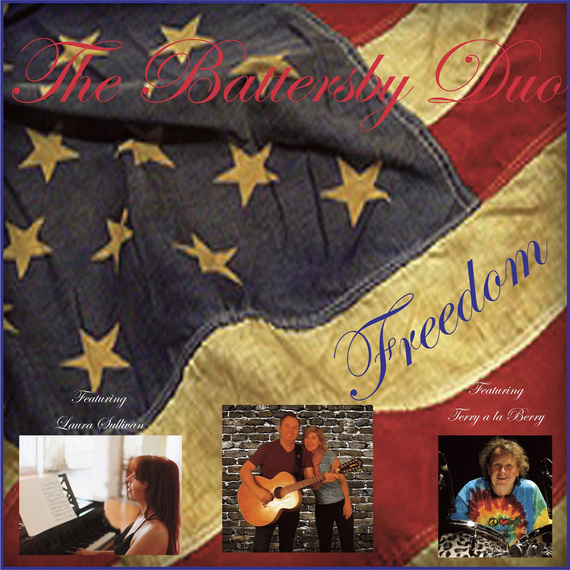