The financial crisis that hit the USA first and subsequently triggered events that brought global economies to their knees still weighs heavily on all markets. The housing bubble that burst and rapidly spread across many countries and finally reached Europe affects all sectors and causes a reduction in global demand for goods and services. It is still driving an unrelenting push downward. None is speared, regardless of the type of activity, be it the production of goods or the supply of services.

An economic recession of this scale impacts the labor market so deeply that it affects both the quantitative and the qualitative parameters. The skyrocketing unemployment rates are fueling the vicious cycle of the economic crisis forcing the eurozone nations to make some crucial adjustments in order to avoid being trapped in deflation. Italy, with an unemployment rate of over 13% (which climbs to 42% for young people under 25) is now undergoing some structural reforms which include the labor market. In an effort to relaunch an economy which has stagnated for almost two decades, the Italian government has developed a reform plan which includes the recently approved Jobs Act, aiming at reforming labor laws. However, while addressing key points of the traditional employment the new law ignores the self-employed labor pool, which in Italy represents a growing segment of the active working force. The reform emphasizes the duality of the labor market where some are not eligible for any benefit at all when unemployed or sick and yet are subject to a tax burden as high, or higher, than all others. They are the unprotected outsiders, the self-employed workers aka freelancers.

Some people see them as parasubordinate workers, bogus self-employed, improvisers temporarily devoted to an activity while waiting for safer work alternatives, others vaguely classify them within the tertiary sector of the economy. In reality, it's a wide category of independent professionals that provide intellectual and conceptual services to the market, a valuable and irreplaceable highly qualified workforce resource that despite the lack of dynamism of the economy embraces the flexibility required by the changing markets. It's a new class of highly- skilled workers who work for themselves and do not employ others but unlike the traditional liberal professions these freelancers do not have a professional order representing them. The lack of regulatory and support frameworks unjustly relegates this category to a limbo denying its business model which is still unacknowledged by the institutions thus depriving it of an official status.

"Such legislative void led to a tax legislation that draws from both the business and individual taxations, balancing between two realities that do not reflect its specificity nor do they cover it entirely" says Anna Soru, chairwoman of ACTA, the Association of the Consultants of Advanced Tertiary in Italy.

Despite the Dini Reform in 1996, which laid the basis for a new system in line with the evolving patterns of the world of work introducing a separate welfare and pension scheme, and despite the introduction of the law 4/2013 which gave this category a formal recognition, little has been done so far to support and legitimize them.

"The number of self-employed workers doubled in 2003-2004 when the social security contribution rate was at 14% for one year" continues Anna Soru "then it was raised from 18,20%-19,20% (based on income brackets) to more than 23%, a 5 percentage point increase in just one year. Therefore, the separate welfare and pension scheme from its inception has undergone a staggering 18% increase (from 10% to 27,72%) in just less than twenty years".If we add the income taxes imposed on this category we reach an overall unbearable fiscal imposition, considering that unregulated professions in Italy have no access to the unemployment compensation system, have no income support policy and do not benefit from an adequate protection in case of serious illnesses that prevent them from working for a prolonged period of time. To make things worse, an impending 33% of social insurance contributions casts a shadow over their future. A planned annihilation.

Paradoxically, iPros (Independent Professionals) are the fastest growing group in the EU labor market. This is what emerges from the research carried out by
Patricia Leighton
, professor of European Social Law at the IPAG Business School in France who has studied this reality at length. In her report "Future Working, The Rise of Europe's Independent Professionals" she analyses this structural change of the labor market that is taking shape in Europe despite the general governmental myopia. Her research confirms there is a major shift in the way work is performed - a shift from having a job to working for clients. In this new and dynamic labor market iPros have filled the blanks with their expertise and have grown dramatically in the last decade, with an increase rate around 45% they now number almost 9 million serving different market sectors. 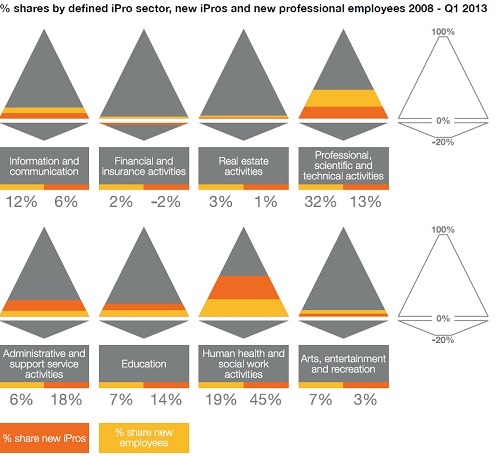 "But Italy's development of freelance work is among the slowest in Europe" says Paola Gatto, a freelance translator-interpreter who has also attended the EFIP 2013 meeting on behalf of ACTA, which is member of the European Forum of Independent Professionals born in 2010 to represent independent working at EU level. "There is a lack of digital culture, of creation of opportunities to use the skills, of academic education on independent management, of promotion and training to tackle the professional knowledge on a collective basis creating synergies with other disciplines, there is a real absence of dialogue by the university and the education system in general with the world of work and the employers that generate the demand, there is a need for an information help-desk providing guidance and counseling, for a temporary-employment agency other than the web platforms where the price dumping is practice, there are no regulations requiring the timely payment of the services rendered such as the Freelancer Payment Protection Act drafted by
Freelancers Union
in the USA which was passed as a bill in the State of New York in 2011. Well, there are really a number of things that could be done". 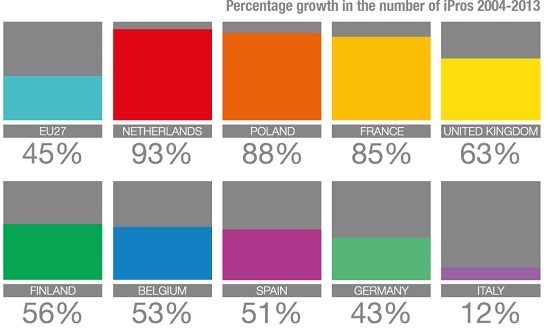 Meanwhile, the Italian freelancer-self-employed worker belonging to the unregulated professions strives to match a working environment actually too rigid and still bound to old schemes with the opportunities arising from the rapid change of the economy. There is a fundamental contradiction between the constant call for flexibility in the labor market and the fiscal structure to support it, as if this policy trend continues we, in Italy, will be shortly witnessing a further evolution that will generate a new category: the "Vanishing iPros."