In 1930, the British satirical magazine Punch published a cartoon of a boy, lying on his stomach on the floor, reading a book on relativity. When asked where his sister is, he replies, "Somewhere in the absolute elsewhere."

That boy was the seven-year-old Freeman Dyson. He did not understand why his father had sent his remark to Punch. It was after all technically correct. What was so funny about it?

Dyson grew up to be a world-famous mathematician, physicist, astronomer, and an elegant writer. For 60 years he has worked at the Institute for Advanced Study at Princeton. Later this year he will be 90. An elfin man with pointed ears and mischievous blue eyes, he still walks faithfully to his office every morning, invariably dressed as the British boarding school boy he once was -- with a tweed jacket and tie. 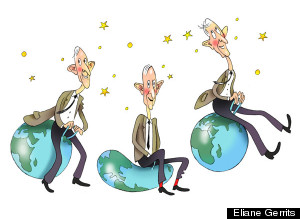 To celebrate Dyson's 90th birthday a conference was held in his honor last week at the Institute. He himself gave it the title "Dreams of Earth and Sky." The speakers, also all chosen by him, were just as exciting as the Jules Verne books he devoured as a child -- until he realized that they lived only in science fiction.

Thus, I find myself immersed in his fascinating world. I hear the English Astronomer Royal, Martin Rees, talk about alternative universes. I see a map of the nearest stars where extraterrestrial life might really exist. Magic formulas, the interior of the earth, climate change, nuclear disarmament, life on Mars -- ideas that are often as controversial as those of Dyson himself. But also with an equally infectious enthusiasm about everything there is to discover. If I were a child, Dyson would be my hero, and I would want to be an astronomer. Happily, there are many children in the audience.

In the event's program, the title page of a book that Dyson wrote at the age of nine is printed: Sir Philip Roberts' Erolunar Collision describes an expedition to the moon to prevent a collision with the planet Eros. There is also a picture of the older Dyson at the launch of the Russian Soyuz rocket. His daughter Esther was the back-up astronaut. How much he himself would have wanted to go into space.

On the cover of the program is an intriguing painting. We see Dyson on the back, standing on top of Planet Earth and we look over his shoulder at a universe full of stars, nebulae and black holes. He looks like a child in the body of an old man. He reminds me of The Little Prince on his single asteroid B -612. Dreaming, thinking, imagining. Somewhere in the absolute elsewhere .

At dinner he talks how in the 1950s he went to San Diego to design nuclear-powered missiles to travel to Saturn. He and his colleagues would say that they no longer wanted to look at the universe through a keyhole but would rather pull the door to the cosmos wide open. He still regrets that the U.S. government decided to go no farther than the moon on a conventional rocket.

At the end of the evening, Freeman's son, the writer George Dyson, addresses the group. "I'll tell you how to recognize a genius," he says with a glance at his 90-year-old father, surrounded by his six children and 16 grandchildren all nibbling on little sugary asteroids from his birthday cake.