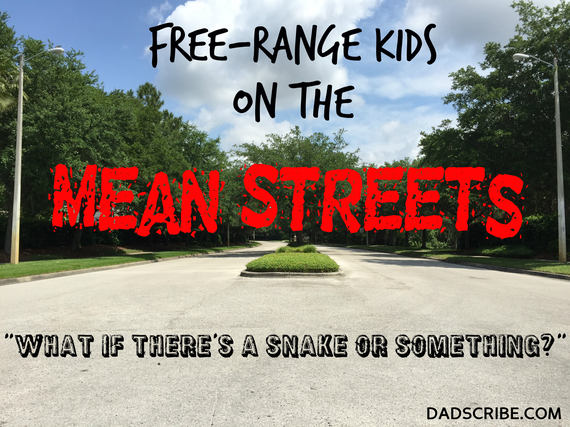 I asked our 9-year-old son if he thought he and his 6-year-old brother were old enough to walk the mile between our home and the neighborhood community pool without me or Mom.

He shook his head no before I finished the question.

He paused to marvel at the magnitude of the word, the vast distance it represents for a third grader, the incomprehensible here-to-thereness of it.

"There's so much chance of bad stuff happening along the way," he continued. "Like, what if there's a snake or something?"

What if the mean streets of our suburban Central Florida neighborhood were over-run by an army of hungry Burmese pythons, on the hunt for new meat after eating all the rabbits and deer in the Everglades?

Something like aggressive, stinging fire ants, which can swarm up a small child's leg in an instant and inflict dozens of painful wounds.

Something like reckless high school-age kids tearing around the neighborhood like idiots on modified, rocket-propelled golf carts.

Something like a careless driver flying along far too fast to see two little boys alone crossing the road.

Something like the alligators that frequent those bodies of water. (Seriously. They're everywhere.)

Something like a bad person looking for an unprotected kid to take.

Something like an over-zealous good Samaritan watchdog poised to place a panicky phone call to an over-zealous law enforcement agency that stands ready to over-zealously protect the children of the world from parents who have the gall to allow their kids to walk alone on a public sidewalk less than a mile from home.

It's a jungle out there, right?

It's a pleasant, 15-minute stroll, with broad sidewalks attended by shade trees the whole way. Wide strips of low-cut St. Augustine grass form a green, well-tended barrier between the walkways and the occasional passing minivan.

Yet, even in this idyllic setting, danger lurks behind every swaying palm tree. The seemingly tranquil stretch between our driveway and poolside actually is a battle scape.

In my mind, at least.

Listen, we trust our sons. They have proven worthy of that trust time and again. They are growing up well and confident.

But they're kids, and we're parents. They don't yet possess the capacity to deal with crises -- or even minor conflict -- without adult supervision. It's our job as their parents to help them learn those skills, and part of learning means failing at it. We understand that, but we're not going to be irresponsible about it, either.

So, when they play outside, they must do so within shouting distance of the front or back doors. If they plan to go inside at someone else's house, they must let us know where they'll be and for how long.

When they want to go swimming, we take them to the pool. One day soon they'll ride their bikes or walk that mile alone, but not yet.

Does a cautious approach make us helicopter parents? Are we over-protective? Too risk-averse for the healthy emotional development of our sons?

No. We aren't over-protective. We are risk-averse, admittedly, but who in his right mind is risk-agreeable when it comes to their own kids? We aren't Free-Range parents, either.

We are, simply, parents.

Confession: My greatest fear is that something catastrophic will happen to one of my sons, and I won't be there to help them.

I'm not paralyzed by this fear. I don't sit in the dark and rock back and forth, contemplating the horrific potential of the havoc rendered by the forces of darkness.

But the fear is there. I can't deny it. It might not be rational, especially when you consider the statistics behind this recent Washington Post headline: There's never been a safer time to be a kid in America.

This urge to shelter them from the harshness of the world is something I'll have to work through as a father. As they grow, so too will I.

Part of being a parent is learning when and how to let go. It's gradual, sometimes imperceptible, but eventually - they let go of their need for reassurance. They no longer feel the urge to look over their shoulders and make sure we're still there. They let go and move on, alone in the world but ready for what comes.

When that happens, I'll have to be ready to let go, too.

Not yet, though. Not just yet.

A version of this story first appeared on Carter Gaddis' personal blog, DadScribe.com. Carter can be found on Facebook and Twitter (@DadScribe).