I did it. I allowed my daughter Risa, a third grader, to walk to school alone this week. Granted, this should not be breaking news given that it's a five-minute walk in a safe area well-traveled by parents trailing their children to school. And yet... I don't know a single other parent letting their third-grader do it. I feel like the town rebel: I am Kevin Bacon's character "Ren" in Footloose.

Why aren't most third-graders walking to school parent-free, like we all did when we were their age? We're scared to death; that's why. What if our children run in front of a car? Get abducted by kidnappers? I mean, it's just not safe out there like it was when we were growing up, right? Wrong. I, like many others, was astonished to read in Lenore Skenazy's controversial book Free-range Kids that it is indeed safe out there. After researching stats from the Department of Justice, Skenazy determined that crime -- which rose through the '70s and '80s and peaked in 1990 -- has been dropping steadily since then, and we're back to the same crime level we were at in 1970! What's different today? A 24/7 news cycle warning us about the "poison in our bathroom" and "house plants that kill," along with endless child abduction stories on police dramas such as "NCIS" and "Law Order." Of course we're paranoid!

If you're thinking, Sure, but what about all these mass shooting sprees and Internet crimes that didn't used to exist? Well, you're right, but these terrible acts have nothing really to do with letting our kids walk to school or play in the backyard. We lump these acts altogether and decree the world unsafe. And in doing so, we inflict another kind of harm on our kids: We teach them our own community is dangerous and they can't handle it without us. I vowed after reading Skenazy's book that I would do my part to stop the madness.

Last summer, I began allowing Risa to mail a letter for us, half of a block away and on the other side of our street. I made her show me how to look both ways before crossing, and then I watched from my office window, holding my breath as she completed Operation Mail Letter. Next, my husband and I let her walk to playdates in our neighborhood, which was trickier because it involved other parents. When I'd let a parent know ahead of time we were sending Risa over, he/she would suggest meeting my girl halfway or calling when she arrived -- as if I were sending Risa off to battle. I took deep breaths and reminded myself Risa could handle the responsibility, and that it was a feather in her competence cap each time she proved it.

At the start of the school year, Risa asked to walk to school, and we said no. It was too public, and we worried about being judged as bad parents -- clueless and irresponsible, possibly derelict. "Next year," we told her, and changed the subject when she asked for a reason. Eventually, she stopped asking. Now we're at the end of the school year, and my husband suggested we let Risa walk to school alone as practice for next year; it was time. I said OK. When I shared our plan with other parents, I hoped they'd say "good idea!" and join the cause; instead, they replied, "Good for you. We're not ready." We were going it alone.

It was the big day. We reminded Risa never to get in the car with a stranger, and move at a quick pace, not stopping til she got to school. "I know, I KNOW," she said with exasperation, but unable to contain her excitement. She did know. This was it. "How do you feel?" I asked. "Excited," she exclaimed.

I watched her walk down the driveway, her enormous pink, flowered backpack bobbing up and down, and felt teary as she turned to smile at me and wave. She was growing up, and one day not too far off, she will leave our nest. (Maybe that's the real fear.) I watched her get smaller and smaller until, poof, she was out of my sight. Scary? You bet, but it also felt right.

When I picked up Risa at school later that day (ecstatic to see her), she asked immediately if she could walk to school alone again the next day. I kind of wanted to say, "That's enough practice for this year," but made myself say yes. "Yeah!" she shouted, fist-pumping the air. The look of supreme confidence and joy on her face, I realized, is the payoff for not covering her in bubble-wrap.

It's not easy going free-range, and there are no guarantees of safety in this world, as we all know. It is our job, however, to help our child learn to navigate the world with confidence in their abilities as they are ready. I am not telling you to do it; you know your environment best and whether your child is ready or not to walk alone. I only ask that you not be stopped by a collective -- and, in our case, unfounded -- sense of community fear and pressure like I was.

Free-range or bust, one step at a time. 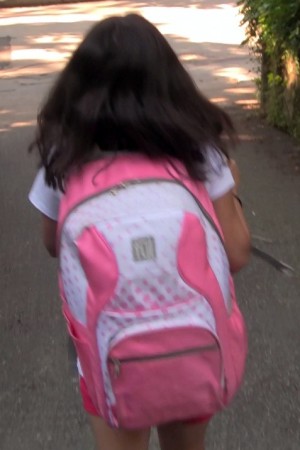 Michelle Cove is the Executive Director of MEDIAGIRLS, a nonprofit in Boston that teaches girls and young women how to make over the media.