It's an urgent escape. Like the Jewish people leaving Germany in the face of imminent death. Only, this journey to freedom takes place in Liberia and involves the personal story of six Christian missionaries. The film, based on true events, feels dramatic and thrilling at moments. Other times, its heavy-handed proselytizing mars the proceedings. While the preachy nature may put off general audiences, it may inspire the faith-based crowd. Who knows? 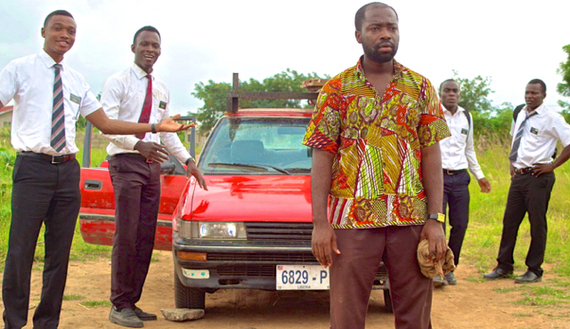 (Photo courtesy of Capacitor Entertainment)
Actor Henry Adofo and the cast of Freetown.

Director Garrett Batty has a propensity for making movies about missionaries in peril. He made a similar-themed movie in 2013; The Saratov Approach was a dramatic thriller about a 1998 kidnapping of two Mormon missionaries in Russia. Freetown follows that same path. Batty was looking for another faith-based true-life story to develop into a film, he came across the events in Liberia and hired playwright Melissa Leilani Larson to co-write the screenplay with him.

In 1990s Monrovia, Liberia, rebel, gun-toting forces menace the city. They're looking to weed out and kill a faction known as The Krahn. Six missionaries try to buck the violence and teach Christianity as they baptize locals. They are ardent about their mission, but also have to deal with the realities of war and mayhem. The leader of the group, Elder Menti (Michael Attram), wants to flee. He turns to church member Phillip Abubakar (Henry Adofo), who drives a rickety red Toyota Corollla. Abubakar loads the car, and altogether, the seven men are off, headed to Freetown, the capital city of Sierra Leone.

Rebels block roads and menace everyone. They don't seem to have a problem specifically with Christians. However, they are united in their hate of The Krahn. Traveling in the group of faith healers is a man named Gaye (Phillip Michael), a Krahn. Along the perilous journey he will be confronted time and time again, and part of his ordeal is whether he will admit to his background or deny it to survive.

The First Liberian Civil War, an internal conflict in Liberia that raged from 1989 until 1997, killed over 200,000 people and eventually led to the involvement of the United Nations. This tiny slim-focused film fails to reflect the magnitude of that aggression. It sets up the characters, in a very insular way. As you watch the missionaries face danger in their neighborhoods, you have no idea that the entire country is aflame. It would have been helpful if the footage included TV news reports, or radio reports that let the viewer know that there really wasn't any place to hide.

That lack of perspective is just one of the script's big faults. The other looming misfire is the tendency for the dialogue to get weighed down in bible talk and spiritual dogma. The characters are set, their dilemma is noted, their antagonists brutal -- that's enough for audiences. If faith and serendipity are going to get the group through their crisis, show it, don't' talk about it. The average filmgoer will get the message that the group is blessed and a higher power is looking out for them. Hammering it, over and over again, makes the movie pedantic, like a long-winded sermon.

The film goes on for 116 minutes, when it could have been edited (Connor O'Malley, S. McKay Stevens) down to 100 minutes tops. The cinematography, by Jeremy Prusso, makes the lush landscape of West Africa so inviting. (The film is set in Liberia, but shot in Ghana.) The perfect lighting of the dark complexions makes the skin look radiant. The musical score by Robert Allen Elliott dramatizes the footage in ways it needs at points, though sometimes it is almost overbearing.

Henry Adofo's performance of the character Phillip Abubakar, who takes the group on a path to freedom, shows a steady, strong undercurrent. Actor and model Michael Attram, as Elder, is photogenic. Phillip Michael as Gaye, the Krahn who wrestles with his identity, shows the most range and depth as he finds a way to show the misery and pride of a people who are being slaughtered.

Freetown doesn't tell its story with the eloquence and understatement of Abderrahmane Sissako's Timbuktu or the solid dramatic flourishes of Terry George's Hotel Rwanda. Still, the film depicts a part of African history that is worth knowing and sharing.