The French edition of Elle magazine is proudly declaring its support for same-sex marriage with a stunning "Marriage for all!" issue.

“This debate is not primarily between old and modern, right and left, homophobes and progressives: there are gay, pro-marriage Catholics, left- and right-leaning psychologists fiercely attached to the symbolism of gender difference as a necessity for any potential child. There are feminists who advocate for IVF for lesbians, but who oppose surrogate mothers for gays because they denounce the commodification of women’s bodies.”

Check out the cover below, then scroll down to keep reading: 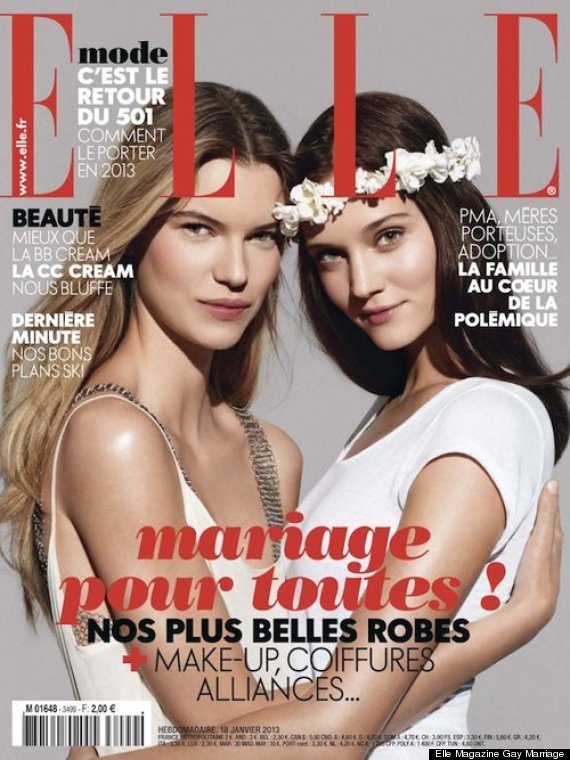 In recent months, marriage equality has been a particularly hot button topic throughout France. Though the nation is generally tolerant towards its lesbian, gay, bisexual and transgender (LGBT) residents, thousands of protesters took to the streets of Paris decrying French President Francois Hollande’s promised same-sex marriage bill, CNN reports.

Meanwhile, former first lady Carla Bruni told French Vogue in December that she disagrees with her conservative husband Nicolas Sarkozy on the issue, and is in favor of both same-sex marriage and adoption, according to the Associated Press.

"I'm rather in favor because I have a lot of friends –- men and women –- who are in this situation and I see nothing unstable or perverse in families with gay parents," Bruni is quoted as telling the magazine.

Hollande's legislation is expected to be voted on either in February or March and, if passed, would mark the biggest step forward for French LGBT rights advocates in more than a decade.

French Elle Magazine Releases 'Marriage For All' Issue
LGBT Commercials
1 / 16
Heinz Deli Mayo
In 2008, Heinz pulled an ad for its mayonnaise featuring two men kissing after approximately 200 complaints to the British Advertising Standards Authority that it was "offensive" and "inappropriate." "It is our policy to listen to consumers. We recognise that some consumers raised concerns over the content of the ad and this prompted our decision to withdraw it," Nigel Dickie, director of corporate affairs for Heinz UK, <a href="https://www.huffpost.com/entry/heinz-pulls-mayo-ad-showi_n_108860" target="_hplink">told<em> The Guardian</em></a>.