Burger King's lower calorie french fry offering -- the Satisfry -- is now a delicacy of the past. The crinkle-cut potato strip, which the fast food joint is nixing from its menu, boasted 190 calories and 8 grams of fat in its "value" size, or 40 percent less fat and 30 percent fewer calories than McDonald's' original French Fries. 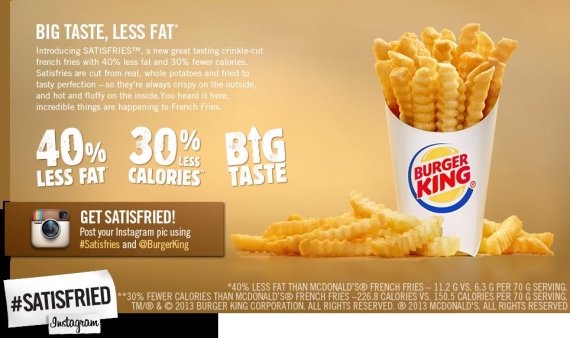 With the skinny version gone for good, what are health-conscious fry enthusiasts to do? Foremost, consumers should remember that french fries are hardly a health food. The snack -- particularly when served at a quick-stop burger joint -- is typically laden with, among other, less identifiable ingredients, fat and sodium.

Even still, if you're mourning the loss of the low-cal Satisfry and are searching for a replacement, take a look at the list below to see how America's most popular fast food restaurant fries (or fry-variations) stack up. Organized by highest-to-lowest calorie count, Burger King's offerings now appear higher in calories than McDonald's'. So much for frying the competition, BK.