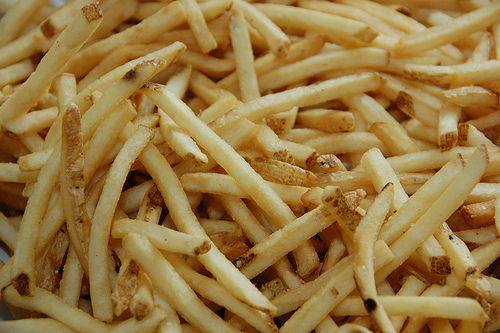 Hamburgers and French fries go hand in hand. When one thinks of a burger, the side dish that almost automatically goes alongside is the chopped potato deep-fried to a golden crisp. July 13 was even designated National French Fry Day!

While we are not 100% sure on the exact origin of the potato, some signs point as far back as 1537. In that year, the Spanish set sail for present-day Columbia, where they mistook potatoes for truffles. The potato was brought back to Spain and also introduced to Italy, where it was cultivated over time to agree with the local palette. The word potato comes from the Haitian word batata, which refers to a variety of sweet potatoes. The word came into Spanish as patata. When the later variants (called papas by the natives) were found, they were also called patata, and the word made its way into English as potato. Spud, the slang term for potatoes, derives from the spade-like tool used to dig potatoes out of the ground.

Many accounts and versions of how the actual French fry started are still being debated to this day, though it is interesting to note that Spain had control of Belgium at that time, and Belgium is often credited with making the first French fries. In Belgium's Meuse Valley between Dinant and Liège, it was very common for the people to fry up small fish for their meals. When the rivers froze up, they would cut up potatoes in long thin slices, and fry them up as they did the fish.

Potatoes served in the French manner were on the menu at the White House as early as 1802. Even though it wasn't exactly what we know now, items that were deep fried came to be known as French fried. In cooking, the definition of 'frenching' is to cut into long, thin pieces. Another point of debate is which term, 'French fried' or 'frenching,' came first.

The Link to Hamburgers

No one really knows how the French fry became linked with the hamburger. One can only surmise that the emergence of fast food chains like McDonald's and Burger Kings did a lot to help solidify this combination. Along with a soft drink, the classic fast food trio was born.

McDonald's offers the shoestring variety, a thin, straight-cut French fry. Others, such as KFC, offer fries that are thicker, longer, and usually still have the skin on. This variety goes under the names potato wedges, chips, or steak fries.

Another variation is waffle fries, which are cut into a criss cross pattern. Curly fries are cut into corkscrew spirals using a rotating blade. Crinkle-cut fries are cut using a mandolin, leaving their sides wavy. Home fries are especially popular during breakfast periods and are usually diced into small cubes.

A lesser-known cut is the Tornado Fry, which cuts a whole potato into one continuous thin spiral and is served on a stick.

Just as condiments do a lot to help improve the taste of the hamburger, they can also amplify your fries. Toppings and seasonings run the gamut from classic ketchup to chili and cheese, mayonnaise, Cajun seasoning, and beyond. A Wikipedia page is dedicated to various accompaniments to French fries found throughout the world.

At the beginning of the fast food boom, French fries were just side dishes. Now, there are a variety of different dishes that incorporate fries as the main attraction.

One of the iconic dishes in the Canadian province of Québec is called poutine. A batch of fries is served with a generous handful of fresh cheese curds, and topped off with a flowing gravy sauce, easily making a hearty meal.

• Many fast food fries are coated with a sugar solution to help produce the golden color. The sugar caramelizes in the cooking fat, producing the golden color customers expect.

• Belgium is known as the leader of the French Fry. They happen to consume more of it than the French. They will even serve them with an egg on top.

• In Europe, fries are often eaten with a tiny, wooden fork.

• To burn off the calories from consuming McDonald's French fries, you have to do the equivalent of 58 minutes of cycling or 90 minutes of bowling.

• Steak fries tend to have lower fat content than normal French fries, due to the lower surface-to-volume ratio.

Mr. Lew is a high school teacher from Montreal, Quebec. In 2009, after trying Montreal's supposed best burger, he decided to see what else was out there. So, every week, a new burger was added to the Great Burger Search. Since then, Mr. Lew has tried more than 100 burgers in cities across Canada, and hopes to one day expand to the rest of North America. Since Mr. Lew is part Chinese, the search isn't limited only to great burgers, but to other types of cuisine that makes Montreal one of the greatest culinary cities in the world.