I got together with an old friend recently and we howled with laughter reminiscing about old boyfriends. (Or as another friend named it when reminiscing with me -- "Reminisson" -- a clever spin on using my maiden name of Nisson.)

I happen to be super fun to reminisce with, because I have a long term memory like a steel trap -- absolutely no detail escapes. (Note that it is the exact opposite with my short term memory as evidenced in this fun blog I wrote.)

Not only do I have a fabulous memory for detail, but I also kept my diaries from my teen and young adult years. I was always documenting my exploits, I guess for the memoir I would want to write someday in my future, the day that still hasn't happened. Yet with the diaries, if a date or detail does slip my mind, I can always reference back by dusting off the diaries and reviewing them.

Back to my reminiscing session with my girlfriend, we talked a lot about kissing, as in: the good, the bad, and the ugly.

You see, before this modern era of random "hook-ups" we actually dated boys. There was at least a two to three date taking-us-out-to-dinner-or-a-movie prerequisite for kissing in those days; or at least it was that way for girls like me who remained chaste, and who were often called a tease for remaining that way.

When looking back over my kissing history, I almost sound promiscuous, which I would have been if not for the mental chastity belt I kept locked on. But let's face it, youth (and my college years) was for dating, having fun, experimenting, and kissing all those frogs to find that prince -- or at least it was for me.

I often think of the great line delivered by Liv Tyler in the movie "That Thing You Do," where she lectured a guy she was breaking up with that she wasted a thousand kisses on him. (If she said thousands of tears, I would have been able to relate.) Anyway, Liv Tyler's comment is the exact opposite of my opinion, despite the sometime gross-out kissing experiences I had, I don't regret a single one from my youth. I liked -- very much liked and enjoyed dating -- each boy that was worthy of a "make-out session." (That's what we used to call it -- that or "French kissing!")

Here then is my history of kissing -- the good, the bad, and the gross: Please note that most of the names are withheld to protect the libel and slander suits!

My first tongued kiss and a few subsequent ones were with a guy (aptly named Guy) in eighth grade. He was my friend/boyfriend and teacher -- he wanted to make sure I knew how to kiss when playing Spin the Bottle at parties. I remember that he taught me the fine art of DRYING THE MOUTH before embarking on a kiss. (Take note!) Give him points for heroism too because I had the old fashioned braces that were lethal weapons and made mincemeat of my upper inner lip. Here is a photo of him for old time's sake. 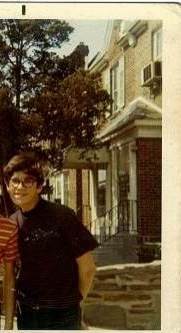 Which brings us to my wet kisser. He was sloppy, gooey, and squishy wet. I loved my wet kisser, but I was too stupid to correct his style. Instead, I stocked up on Chap-stick lip balms and sported a red-ish permanent upper and lower lip line (well before lip liner lipstick was fashionable) through the entire relationship.

I had a nervous kisser, who shook while kissing me. I think I was his first serious girlfriend and I had to endure his quaking inside my mouth until he calmed down a bit.

There was an adorable guy who I had so much fun dating, who would always precede his questions with a question as in, "May I ask you a question?" That's how this guy asked me out, by first establishing that he could even ASK me a question. Then he asked a real question: namely, would I go out with him. This was hilarious when it came time for the kissing to begin. "May I ask you a question?" he asked. "Yes," I answered. "May I kiss you goodnight?" It was tough to begin kissing him since I was discreetly laughing to myself at the time. I still chuckle when I think about it.

I dated a famous athlete while working in promotions for a baseball team. This was my famous "Lizard kisser." It was either snake-like or lizard-like. He had this gross technique of slipping or snaking his tongue in and out like a lizard. Ewwwww.

The best kisser I ever had the good fortune to share numerous delightful ones with, felt to me exactly how great kisses would be described in a cheesy romance novel. I saw fireworks or sparks or had some kind of electric current going through me each time he kissed me. This guy had the smoothest, sexiest, driest technique known to mankind, and although I was young, I felt tingly down my spine into my female parts from his kisses. Yes, they were that good. If anyone would have ever gotten close to getting the best of me, it would have been this guy. I can still close my eyes and picture it now. One never forgets their best kisser.

After I was divorced and middle-aged and back in the dating pool, I unfortunately had to kiss a few more frogs before I found my prince of a husband. One I recall was a tongue-darter -- very disconcerting and unromantic. And another one was worse, he had bad breath and tasted like a dried-out steak every time I kissed him. Beef is okay to eat, but NEVER to kiss.

So there you have it. Perhaps this stirred up some memories for you. Please feel free to share!

Read my regular blog at www.arlenelassin.com