Last week, history was made with the first Asian American prime time show in 20 years, Fresh Off The Boat.

The show made quite a wave as the third most tweeted show of the night, right behind Empire and The Tonight Show Starring Jimmy Fallon. It is also the second highest rated comedy series debut this season, behind ABC's Black-ish. That's pretty damn good.

By now, people should understand why Fresh Off The Boat matters. The raving reviews are in. TV history in the making. Not afraid to confront race. Visibility and validation for Asian Americans. Not only is Fresh Off The Boat a groundbreaking show, it's also funny, well-written and politically bold for an ambitious 22 minutes.

As with any debut, there will be the haters. I'm fascinated by the negative comments. Trite. Boring. Stereotypical. As a huge supporter of the show, the negative comments don't offend me. I'm just stoked that people are even talking about the FIRST ALL-ASIAN AMERICAN sitcom in 20 years!

And because Fresh is the ONLY all Asian-American sitcom on TV, of course people will criticize the crap out of it. Kind of like the first black President -- he can't do anything right (sarcasm). With nothing to currently compare Fresh to, there are high expectations for the show to be worth everybody's time and investment. Remember that Fresh Off The Boat is a start, not an end-all solution to the problems of deep rooted racism in Hollywood.

Furthermore, when I think about how Fresh makes so many people feel uncomfortable, I consider it another success. 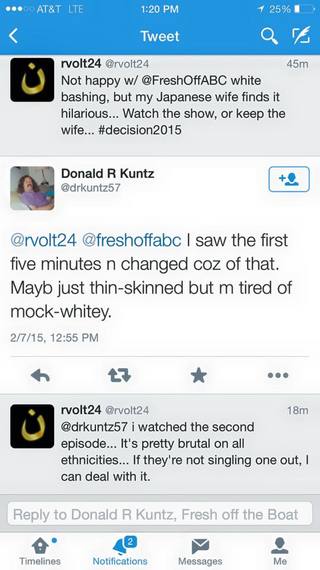 And why wouldn't mainstream audiences feel uncomfortable? Fresh Off The Boat is centered around perspectives of the Asian American experience, inspired by the real life voice of Eddie Huang, positions the white experience as different, and features Asian characters played by real Asian people (unlike white people playing yellow-face characters in Avatar and Ghost In The Shell).

Whenever there is something different that challenges convention, stands out against the norm, disrupts traditional perceptions of race, power and identity -- people are going to get uncomfortable. And they should. Because change won't happen by playing safe in our comfort zones.

This country has gone far too long without broad representations of Asian Americans in mainstream media. The lack of diversity not only hurts the Asian American community, but it's also a detriment to American audiences in general who become conditioned to believing one-dimensional portrayals of Asian Americans.

The way people shape perceptions of Asian Americans based on mainstream representation (or lack thereof) trickles down into every day interactions. Invisibility conditions people to believe that Asian American lives are not valued. Stereotypical roles condition people to view Asian Americans as perpetual foreigners.

For example, just last week Esperanza High students in Tustin, CA chanted racial slurs "Jackie Chan" and "shrimp fried rice" at an Asian American basketball player, Reed Nakakihara. It's sad that these stories are no longer surprising to me.

In addition, the major Sony leak revealed Oscar-winning screenwriter Aaron Sorkin stating "there aren't any Asian movie stars." Obviously the real problem here is that there aren't enough opportunities given to Asian actors, especially when Asian character roles are given to white actors.

In trying to be compassionate, I can understand why some people wouldn't find the show funny. I would assume that non-Asians have no point of reference to understand the jokes, since the story is written from the Asian American perspective. In addition, if they identify with characters whom are made the butt of the jokes, more reason for them to be uncomfortable with and unsupportive of the show.

Asian Americans who dislike the show are probably terrified of stirring the status quo.

And of course, people are allowed to simply not like the show. Maybe it's entitlement, maybe it's privilege or maybe it's just not funny to some folks.

Regardless, Fresh Off The Boat is still important for our country and society. People need to unlearn decades of discrimination and racism embedded in mainstream media -- from lack of diverse roles to marginalizing Asian Americans with stereotypes to promoting yellow face. Because even if you don't find the show funny, you can still learn something from watching Fresh Off The Boat -- and that's the fact that every experience in America (no matter how foreign it may seem from your own) is important. If validating these experiences or even witnessing a TV network validate it, makes people uncomfortable, then that's more reason to keep creating and broadcasting until the experience of seeing Asian Americans on TV becomes as common as seeing a black or white person on the screen.