Though many might consider that an overstatement, it's not far from the truth. Sitcoms usually trend toward the idea of the middle-class, white-family demographic. Check out this list from IMDB on the most popular sitcoms in TV history; nine of the top 10 shows are centered around white families or friend groups. The only non-caucasian-focused show is "The Simpsons," where one could argue that the family is a yellow-colored cartoon version of white people.

ABC's new comedy "Fresh Off The Boat" is hoping to combat the racial monotony of network TV, though. The show, which debuted Wednesday to favorable reviews, is based on Eddie Huang's book of the same name and follows a young Asian-American boy as he tries to navigate American life as an outsider.

The show is only the second Asian-American sitcom ever. Its predecessor, Margaret Cho's "All-American Girl," premiered 20 years ago and only lasted one season.

HuffPost Live's Ricky Camilleri hosted a roundtable discussion Thursday with the show's executive producer, Melvin Mar, and community members to chat about how the show is finally bringing Asian Americans to the forefront of mainstream entertainment. 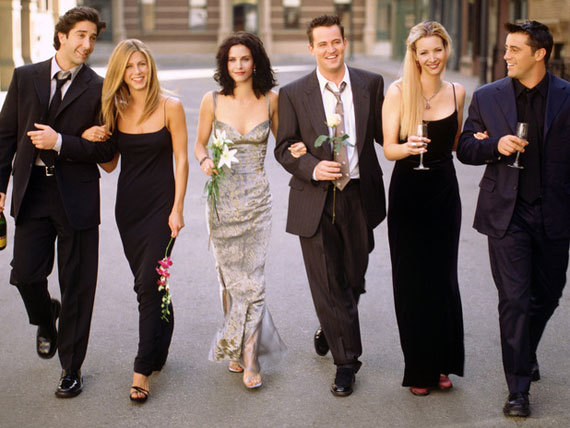 1 / 5
'Friends'
It may be 10 years since Phoebe, Monica, Rachel, Chandler, Joey and Ross sunk their last coffee at Central Perk, but barely a day goes by without talk of a 'Friends' reunion. While many fans are desperate for it to happen, we have a feeling that watching the six-some as a bunch of middle-age parents rather than a group of single twenty-somethings, wouldn't recapture the glory days of the show's original run. Plus, producers would have a hard time explaining Monica's new face, thanks to Courteney Cox's love of pumping it with Botox.
NBC