ABC's "Fresh off the Boat" set Twitter ablaze after sharing an offensive promotional image for the show on Thursday.

As captured by BuzzFeed, the account tweeted the below ad: 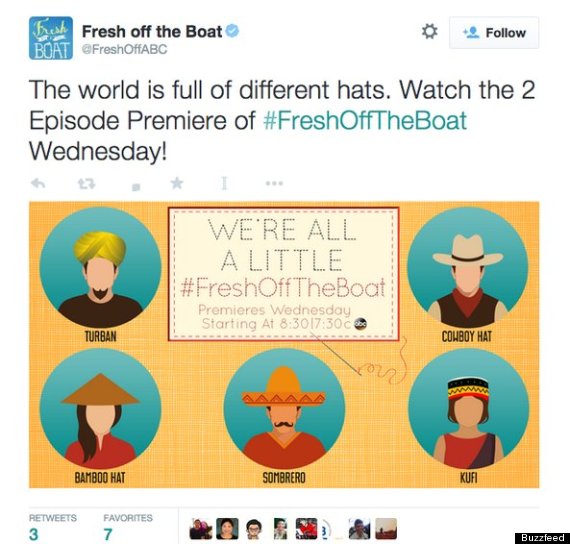 Eddie Huang, whose memoir "Fresh Off the Boat: A Memoir" served as inspiration for the show, railed against the promo on his Twitter account.

.@originalspin @whoismims someone please reverse this @FreshOffABC at least they didn't do the native american with chicken pox blankie lol

@lxnro1988 @whoismims @originalspin maybe people are just fucking morons. you have to be a mouth breathing psycho to make that graphic

@originalspin @whoismims @FreshOffABC no dude. what are you talking about? how is this "well meaning"? this is flat out TERRIBLE

@originalspin @whoismims @FreshOffABC don't excuse them. we can't straddle a fence forever. this is plain offensive and ridiculous

.@originalspin @whoismims @FreshOffABC the root cause is hiring people who have NEVER LIVED THESE LIVES and paying them to represent us

.@chineseguy88 people at studio actually listen to you cause you're a "good chinaman" lol could u please have them take the turban ad down?

Confirmed: That tweet is being yanked & the production is reading the riot act at the social media agency right now @whoismims @MrEddieHuang

A representative for ABC said the marketing department had been made aware of the tweet, but did not have an official comment to pass along at this moment.

The tweet comes after the "Fresh off the Boat" team faced similar ignorance from a journalist at the Television Critics Association Winter Press Tour.

"I wanted to ask the question: I love Asian culture," a reporter said to the cast and crew. "And I was just talking about chopsticks, and I just love all that. Will I get to see that, or will it be more Americanized?”

Huang and showrunner Nahnatchka Khan responded to the question with sarcasm.

“Wait till Episode 5, it’s all about chopsticks,” Khan added.