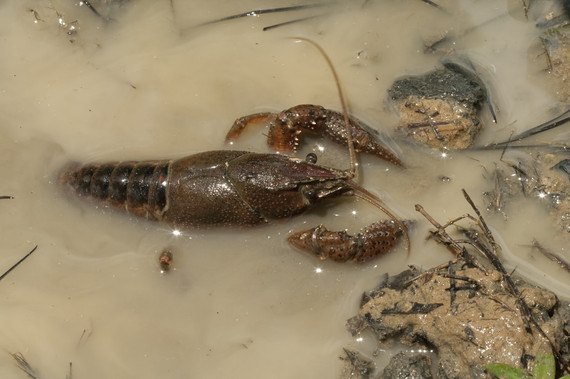 When invasive species are discussed, most people think of plants, birds and perhaps a few mammals. But Africa has become home to another, less well known kind of invader: freshwater crayfish.

One species has already caused enormous problems in Kenya. Another is threatening the Okavango Delta, which is a World Heritage Site.

Crayfish interlopers slow down plant growth, eat rice seedlings and can even make dams' banks collapse. In Europe, alien crayfish have decimated native crayfish species partly through competition. North American species also carry a fungus to which they are immune but which is deadly to native European crayfish.

So how did freshwater crayfish end up in Africa's waters? And what can be done to manage these populations?

First arrivals in a million years

Freshwater crayfish are a highly diverse group of decapod (ten-legged) crustaceans. More than 600 species have been described. They are divided into three large families: the Cambaridae, Astacidae and Parastacidae, which are geographically and physically distinct. Both the Cambaridae, with by far the highest number of species (423), and the Astacidae, with about 39, are confined to the northern hemisphere. The Parastacidae, consisting of 176 species, only exists in the southern hemisphere - specifically in Australia, South America and Madagascar. Continental Africa has no native freshwater crayfish species.

Over the years, mostly because of aquaculture practices and the aquarium trade, humans have introduced crayfish species in areas beyond their native ranges. Many of these species survived and now thrive in areas where they were not supposed to exist. Freshwater crayfish invasions have occurred all around the world.

These human activities have introduced freshwater crayfish populations to Africa's mainland for the first time in millions of years.

The introduction and spread of any alien species into a new region threatens native communities. Alien species can act as novel predators, competitors and parasites, and they can carry diseases. They may also breed with indigenous species.

Freshwater crayfish are famous for being high-impact invaders: they alter the structure and functioning of the ecosystems they invade.

One species' African story proves this point. The red swamp crayfish (Procambarus clarkii) is native to North America. It has been introduced into Uganda, Kenya, Egypt, Zambia, Sudan and South Africa.

The crayfish's introduction into Kenya's Lake Naivasha in 1970 became world famous because of its devastating consequences.

The crayfish managed to spread over the lake in a very short time, almost totally destroying its floating and submerged aquatic plants. These plants had provided food and refuge for fish and other aquatic animals. The crayfish also decreased native populations of snails and freshwater crabs from adjacent rivers.

Fishermen's livelihoods were affected too. The crayfish ate fish caught in gill nets, getting entangled in or destroying the nets and disturbing the reproductive and breeding activity of many bottom-spawning species.

This crayfish is now present in large areas of Kenya. There is a high risk that it will reach Lake Tanganyika soon - with similarly devastating consequences. And it's not the only alien crayfish species threatening Africa's lakes.

Four other alien crayfish species have been introduced into Africa. Three are originally from Australia: the Australian redclaw crayfish (Cherax quadricarinatus), the smooth marron (Cherax cainii) and the yabbie (Cherax destructor).

These three species were introduced into South Africa during the 1970s for aquaculture purposes. From there they were translocated to Zambia. The marron and the yabbie have not established wild populations, remaining confined to aquaculture facilities.

The Australian redclaw crayfish is a different story.

A prospective aquaculturist applied to farm this species in South Africa and was turned down by the authorities. He managed to get permission for his venture in neighbouring Swaziland. Several rivers make their way through Swaziland before re-entering South Africa. It was exactly through one of these - the Komati river - that the redclaw crayfish made its way into South African freshwaters about 16 years ago.

The crayfish is now present in a large part of the eastern Mpumalanga province and in some scattered locations elsewhere in South Africa. It is also found in all Swaziland's main rivers and in large areas of Zambia, and is spreading through Mozambique and Zimbabwe.

In Zambia it mainly exists on the Kafue Flats and in Lake Kariba. In the Kafue area, artisanal fishermen have complained that these crayfish damage the fish caught in their gill nets.

In both Zambia and South Africa, the redclaw crayfish has introduced an alien temnocephalan ectoparasite that might be harmful to native crabs.

An isolated population was recently reported spreading on Zambia's Barotseland floodplain. There is an extremely high risk of this population spreading to the Okavango Delta, with potentially disastrous consequences to this World Heritage Site.

Another species that bears mentioning is the marbled crayfish or "Marmokrebs" (Procambarus fallax). It was introduced to Madagascar for mysterious reasons, but there may be a link with a road building project carried out by foreign contractors in 2003/2004. In 2005, biologists at the University of Antananarivo noticed it being sold in markets close to the capital.

This particular crayfish has a peculiar history: nobody knows where it comes from. It simply appeared in the German aquarium trade in about 1995. It is also the only decapod in the world known to be able to reproduce by parthenogenesis - a female is able to reproduce without being fertilised by a male. This means that a single individual is sufficient to start a whole new population. As such, this species seems very likely to pose a serious threat to freshwater biodiversity in Madagascar.

Freshwater crayfish are carried downstream by currents. They can also swim or even walk upstream. Human beings use them as fishing bait for bass, for aquaculture and for sale. Some people keep them as pets. They're here to stay.

The question is how to manage these populations. African countries need to develop better strategies to prevent further spread and to reduce the possible impacts of invasion. More stringent legislation and more scientific research will also be crucial. Ordinary people must be taught about the risks and potential impacts of spreading invasive crayfish.

If these species keep spreading unchecked, the future of Africa's freshwaters doesn't look bright. Hopefully there is still time to act so the continent's freshwater biodiversity can be conserved.