For a bike and alternative mobility enthusiast such as myself, pictures of Jessica Alba in Paris tooling around the town on her Velib bike-sharing bike were pure, happy joy.

Alba on her Velib reminded people why bike sharing is so popular - with traffic concerns, in many big cities it is the fastest way for anyone, celeb or pleb, to get around town. Alba's a good counterweight to all the glum news about Velib bikes' horrendous rate of vandalism and disrepair, bicyclists behaving badly, and JCDecaux's griping about the high costs and unsustainable nature of the program. 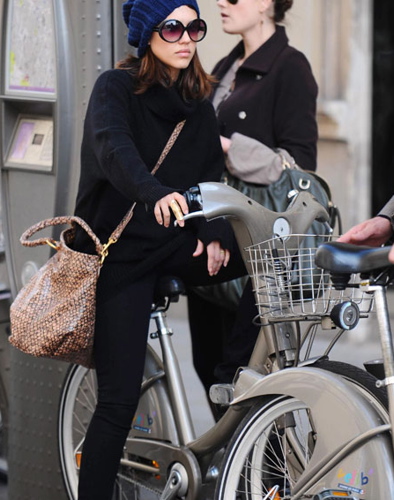 Photo Jessica Alba on a Velib via celebrity-gossip.net.

Boston must be bullish on bike sharing, as it has put out requests for proposals for a program that would start with approximately 1,500 bikes at 150 locations in a year's time. Boston's idea is for the bike-sharing program to be "a turn-key system that self finances."

In other words, a system with advertising plans, subscriber fees, and private capital investment. Though city officials estimate the program could eliminate 315,000 car trips annually, a "savings" of 750 tons of greenhouse gases annually.

Just how much does would that type of bike share system cost? Bike-sharing blog says start-up is the biggest cost (though JCDecaux griped mainly about maintenance) and estimates a 1,400 fancy-bike system would cost $6 million for two years of capitol and operating costs.

Sustainable mobility consultant Eric Britton says the cost for different systems could vary by 100 to 200 percent based on many factors - size, city environment, social context - but he uses the yardstick of US$10,000 per bike for year one of operation - in other words, $5 million for a 500 bike system. That gives a very different picture of JCDecaux's investment or returns. But Britton says for the multi-national outdoor advertising behemoth it depends on the existing contract they may have.

"JCDecaux is very, very clever," Britton said. "They are not going to be losing money."

So JCDecaux is probably coming out okay or they wouldn't be pursuing other contracts if Velib was as broken and money-losing as articles have implied. And they are - they've just inked an agreement to supply 450 bikes to Dublin in return for outdoor advertising space worth $1.25 million U.S. annually. In addition, last month JCDecaux inked a deal with Brisbane for a 2,000-bike system, and the Brisbane Times said the advertiser has systems in 16 countries worldwide.

Now if carbon emissions had a price, perhaps city officials would be a little more eager to finance this up and coming form of public transport!