Outside of the labor market, it has been a rocky start to 2016. Disappointing corporate profits, plummeting stocks and weak industrial production all point to an economy that slowed sharply late last year. Some economists fear this slowdown has carried over into 2016, potentially showing the first signs of a long-delayed U.S. recession.

This Friday, we'll get the first view of whether the recent tumultuous economic environment has begun to affect the labor market. Here's what we're expecting to see in this Friday's jobs report from the federal government:

A Stumbling Economy Post-Rate Hike?
Fed interest rate hikes are often followed by volatility in markets. During periods of tightening monetary policy, investors who are exposed to interest rate risks scramble to adjust portfolios whenever new economic news comes to light during these periods.

The latest interest rate hike is no exception. Since the Fed's December interest rate hike, stock markets have tumbled sharply. The broad-based S&P 500 index has dipped sharply this January, hammering companies who are looking to raise capital and invest, as well as depressing the value of 401(k)s for millions of American workers.

There are many economic indicators that point to an economic slowdown in the final quarter of 2015. They include: big drops in durable goods orders, weak retail sales, a decline in industrial production, lower than expected corporate profit reports, and weaker than expected exports. Last Friday, the Department of Commerce reported that the U.S. economy was essentially stagnant in the fourth quarter of 2015, growing at a lackluster 0.7 percent annual rate.

Adding to the gloom, China's economy slowed to the slowest pace of growth in 25 years last year, dragging down U.S. exports. And rock bottom oil prices--while traditionally a boon to consumers and the economy--continued hammering the energy sector. Oil prices are down 60 percent since mid-2014, prompting dramatic layoffs and investment cuts among oil and gas producers.

A Resilient Labor Market
But so far, none of this volatility has spilled over into the labor market, which remains healthy by almost every measure. 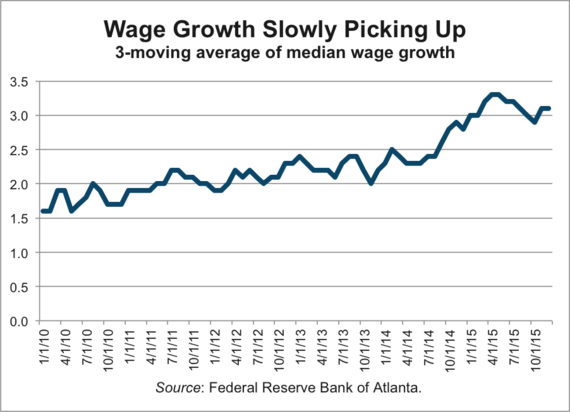 At this point, there is little evidence indicating the U.S. economy is headed into a recession. From the perspective of job seekers, the labor market today remains the healthiest it has been in a generation, with strong job growth, near-record levels of job openings, an unemployment rate down to what most economists consider "full employment" and even burgeoning signs of a return to normal wage growth.

In the wake of recent stock market volatility, it's likely that Fed policymakers will put the brakes on further interest rate rises--at least until markets settle down and broader signs of growth become clear. When the economy is at a turning point, the labor market always responds last, as employers turn to layoffs as a last resort during hard times. This Friday, markets will be watching closely for clues that we've successfully dodged yet another possible slowdown.