Last month, a weak jobs report dropped a bombshell on financial markets, sending stocks reeling and sparking recession fears throughout the media. Today, all eyes are on Friday's jobs report for signs of weakness in an otherwise healthy U.S. labor market. Here's what we're watching for at Glassdoor:

Where Do We Stand?
Over the past month, media commentary on the U.S. economy has been almost uniformly pessimistic. In some ways this is understandable. There are real headwinds facing the economy: slow growth in China, low oil prices hammering energy producers, a strong U.S. dollar weighing down exports, and anemic 1 percent GDP in the final quarter of last year.

But despite these risks, today's labor market remains healthy by essentially every measure in the data. Fears of a weakening job market are based largely on anecdotes and speculation and bear little resemblance to the reality we see in the labor market data today.

Consider last month's jobs report. It showed 151,000 new jobs were created in January. Because that figure slightly missed economists' predictions, stock markets turned sharply downward. But how worrisome is 151,000 new jobs? Research shows we only need about 80,000 new jobs per month to keep the economy near full employment--about half the number created last month. That came on the heels of three extremely strong job gains: 295,000 jobs in October, 280,000 jobs in November, and 262,000 jobs in December. Where's the evidence of a dramatic weakening of job growth?

For context, consider what an actual weak job market looks like. As recently as 2010, the U.S. economy actually lost jobs in five of that year's 12 monthly jobs reports. In 2009, averaging across the entire year the U.S. economy lost 423,000 jobs per month on average. In a single month in 2009, the U.S. labor market lost 823,000 jobs. In the wake of these losses, the U.S. unemployment rate peaked at 10.0 percent in October 2009--more than twice today's unemployment percent rate.

By almost every objective measure, today's labor market remains the strongest it has been in a generation:

There are good reasons to be cautious about U.S. growth going forward. But as of today, the widespread pessimism in markets is disconnected from the overwhelmingly positive data on the state of the U.S. labor market.

Probably the single best measure of labor market health is the job "quits" rate. That's the rate at which workers are voluntarily quitting jobs for better opportunities elsewhere. During downturns workers hold onto existing jobs and rarely quit voluntarily. During boom times, confident workers are far more likely to move onto greener pastures of their own accord. Not surprisingly, job quits are strongly associated with higher wage growth.

The figure below shows job quits per month in the U.S. since 2001. In normal times, around 3 million workers quit their jobs each month. That number plummeted to around 1.5 million during the depths of the Great Recession. But since 2010, voluntary quits have steadily increased, illustrating the growing confidence of U.S. workers in today's labor market. In December, job quits reached 3 million for the first time in nearly a decade--an extremely positive indicator of a fundamentally healthy labor market. 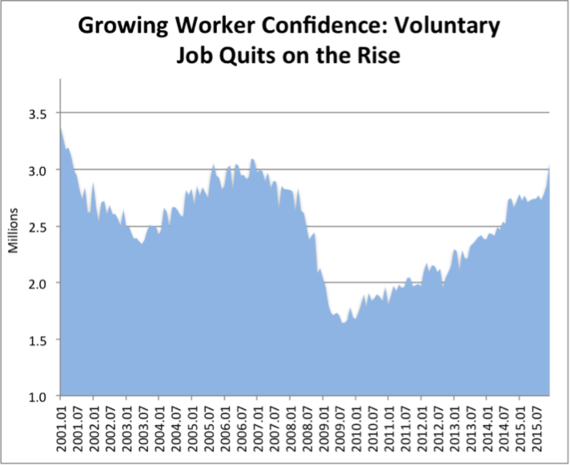 A second powerful indicator from the BLS JOLTS survey is the number of unfilled job openings. Specifically, the ratio of unemployed workers per job opening is an excellent measure of competition for talent in the labor market. For each job opening, it illustrates how many unemployed workers on average are competing for that job--a clear measure of how much bargaining power is in the hands of workers versus employers when it comes to bargaining over wages. 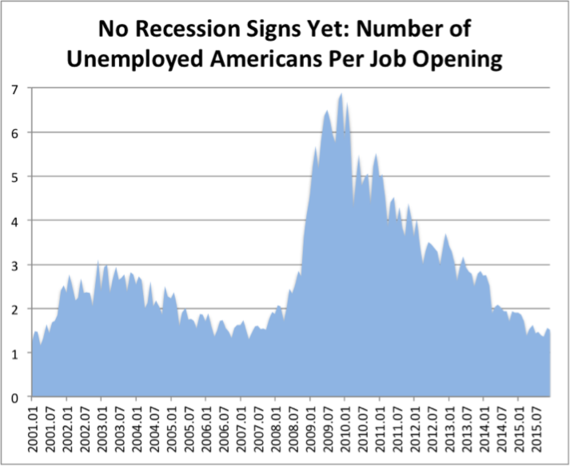 Although there are lingering concerns about slowing U.S. growth and a possible recession, the data as of today paint an almost uniformly positive picture. Today's labor market remains strong and growing--a trend we expect to continue in the latest figures from Friday's jobs report.