The One Where Everything Is A Lie.

"Friends" may be one of the greatest shows of all time but in its decade-long run on the air, it had quite a few inconsistencies. Family backstories changed, names switched spellings and even Ross' hatred for ice cream was forgotten. But most of these are simply minor annoyances. Truly frustrating are the glaring plot holes that affected entire episodes.

In honor of Matthew Perry's August 19 birthday and his character Chandler's many goofs, here are a few writing blunders that ended up ripping giant holes in the plot. Consider yourself warned: You'll never watch another episode of "Friends" the same way again.

"The One Where They All Turn Thirty," Season 7: Rachel becomes the last member of the group to turn 30 and is terribly depressed about her birthday. The episode shows a series of flashbacks to the others' own birthdays when they turned 30.

The problem is that Joey is actually the youngest in the group. In the season one episode, "The One With The Birth," he says that he is 25, while Rachel is implied to be closer to Monica's age of 26 since they went to high school together.

Moreover, Rachel's birthday is supposed to be in May, which she tells Gunther in, "The One With Joey's New Girlfriend." But in Season 7, she tells a police officer that she is an Aquarius (a January - February baby).

The ages of the rest of the group are just as inconsistent. For example, Ross was 29 in season 3, 4 and 5.

"The One With The Late Thanksgiving," Season 10: Monica and Chandler lock their apartment door when everybody else shows up late to their Thanksgiving dinner. Rachel says she has an old key from when she used to live there and so she uses that key to unlock the door. The chain is still on the door, however, and Joey gets his head stuck. When Chandler lets him free while Monica is on the phone, Joey crashes into the dinner presumably ruining everything. Monica isn't even mad, because she was on the phone with the adoption agency who told her they could adopt a baby. Perfect moment!

Unfortunately, they never would have gotten the door open. Joey and Phoebe accidentally lock the door to Monica's apartment in, "The One Where Rachel Tells...," from Season 8. To get in, Joey tells the superintendent there's a gas leak. Instead of finding the right key and unlocking the door, stating that would take too long, the superintendent has the door knocked down. He tells Joey and Phoebe that he'll have to replace the locks. 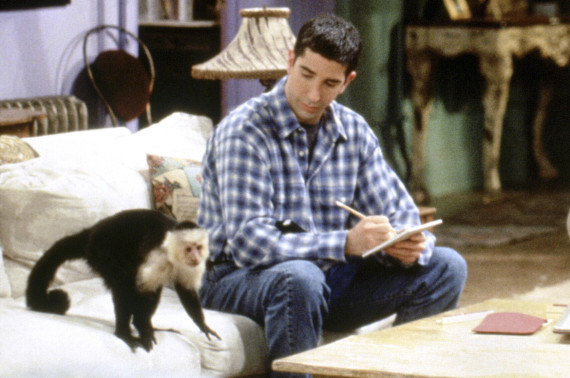 "The One with George Stephanopoulos," Season 1: Ross reluctantly tells Chandler and Joey that his now ex-wife, Carol, is the only woman he's ever slept with. He maintains this story for the early seasons -- that Carol was special and Rachel was only the second girl he'd ever slept with.

In the season seven episode, "The One With Rachel's Assistant," Ross accuses Chandler of sleeping with the cleaning lady back in college. Chandler tells Ross that that was actually him. Ross doesn't challenge this and simply says, "Whatever dude, you kissed a guy."

"The One With the Holiday Armadillo," Season 7: While waiting for a table in a restaurant, Monica tells Chandler to shake the host's hand and give him money. Chandler asks how she knows what to do and asks if her ex-boyfriend, Richard, used to do this.

In the Season 2 episode, "The One Where Old Yeller Dies," Chandler and Joey excitedly impersonate Monica's "cool" boyfriend by slipping money back and forth. Richard walks in on them doing this and even says they're getting better, implying he taught them specifically how to slip money to people.

Chandler's question to Monica of whether Richard used this method makes no sense plus, look at how skilled he is at passing money back and forth with Joey! He even does it without looking!

"The One Where Everybody Finds Out," Season 5: It's found out that Ugly Naked Guy is finally moving out, Ross is determined to take over the apartment. He goes over to Ugly Naked Guy's place, strips down and has mini-muffins. The rest of the group watches in delight.

Maybe just a bit of a fun stretch, but if you look closely, the building outside the window completely changed as the series went on. At some point between the introduction of Ugly Naked Guy and this encounter, the building must have been demolished and rebuilt. It seems unlikely that Ugly Naked Guy would gain another apartment in this new building, especially at the same downward angle from Monica's apartment.

Speaking of architecture -- it's all messed up. The balcony on Monica's apartment varies in size, and from the exterior shot shouldn't exist at all. The exterior also shows that neither Monica or Joey's apartments should have fire escapes.

"The One Where Ross Meets Elizabeth's Dad," Season 6: This seems like a plot hole the show's writers were aware of and decided to embrace anyway. Bruce Willis actually agreed to make this cameo for free after losing a bet to Matthew Perry.

You can watch Chandler, Joey and Ross enjoying a "Die Hard" marathon in this clip. One Reddit user pointed out more of these instances:

Most disturbing: Jessica Rabbit was on Chandler's list of celebrities he could sleep with, his FATHER was played by Kathleen Turner, who voiced Jessica Rabbit.

The Fashion of Friends, Season 1