Matt LeBlanc is turning 48 today, July 25. Here are five things about Joey Tribbiani and the rest of the cast of "Friends," which you might not already know.*

1. The frame around the peephole was originally supposed to have a picture, but the glass was accidentally broken.

Original set decorator for the show, Greg Grande, told The Huffington Post that he bought the frame from the Rose Bowl Swap Meet and initially dressed it into the set as a normal picture holder that sat on a table.

The idea might have come from the show's art director (or today's equivalent, production designer) John Shaffner pushing for Grande to do something special with the door. Shaffner really doesn't like when doors in sitcoms are lackluster. "It's one of my pet peeves," he told HuffPost, "especially in sitcoms in New York, what's on the back on the door."

2. Jennifer Aniston and other cast members were scared of LeBlanc before meeting him, just based on reading his character's forward personality. According to a 1995 article in People, writer Craig Tomashoff explained how LeBlanc was perceived before he'd even met the cast:

Certainly, having someone constantly hit on you by asking, "How you doin'?" can get annoying. Fortunately, LeBlanc was more of a "How are you doing?" person in real life.

3. Rumor had it that the actors signed an agreement not to sleep with each other.

In 1997, Elle brought up in their story about Courteney Cox "a recent rumor which had all the actors signing some kind of agreement that they wouldn't sleep together."

When asked about this, Cox laughed, saying: "Ha ha, there's no pact, there's never been a pact."

4. Although, Lisa Kudrow once joked that the cast only became close after they all slept together. In a 1996 Us Weekly cover story, Aniston, Kudrow and Cox were asked what would happen if the male cast saw them naked.

Cox said, "They wouldn't care," while Aniston joked they'd care almost too much and run to the "their little rooms and go, 'Oh. My. God.'"

Following up, Cox said that they'd all become like brothers and sisters, to which Kudrow joked, "You mean after we all stopped sleeping with each other?"

5. Vince Vaughn auditioned to be Joey.

Both original casting director Ellie Kanner and her former assistant had written down that Vaughn had auditioned for the role of Joey in their notes. When speaking with HuffPost, Kanner remembered him as "handsome and tall" and a "good actor," but that he just didn't fit the way LeBlanc ended up fitting.

Vaughn had yet to have a breakthrough role when he auditioned for the part of Joey and was still an up-and-coming actor. "That would have been a little different," Kanner joked.

"It's just a matter of putting the pieces of the puzzle together," she added.

BONUS: The famous "mistake" in the establishing shot actually has an explanation.

The establishing shot for Monica and Joey's apartments is often labeled as a mistake: There is a fire escape where there shouldn't be, there's no balcony. Art director John Shaffner had the same exact reservations.

Initially, the request was for a special window in Monica's apartment that gave it a kind of identification, hence the big multi-paned window in the show. Shaffner wanted the exterior shot to match so, "I went to New York and came back with an armful of pictures of the tops of the sixth-floor buildings with windows like that," he told HuffPost.

When the show used something else entirely, Shaffner wanted an explanation.

"They got an establishing shot with arched windows and I'm like, 'Well, we don't have any arched windows in the set,'" Shaffner recalled. "So that was always, to me, kind of like 'Where are these windows?' So they said, 'Don't worry, we're just showing the building. Their apartment is on the other side, don't worry.'"

So, the establishing shot is supposed to be showing the other side of the building. Perhaps unorthodox, but at least it clears up that supposed error?

All images Getty, except for the above image, which is WikiCommons.

* These trivia facts have appeared in past HuffPost "Friends" stories.

PHOTO GALLERY
do not use

5 Things You Didn't Know About 'Friends'
do not use 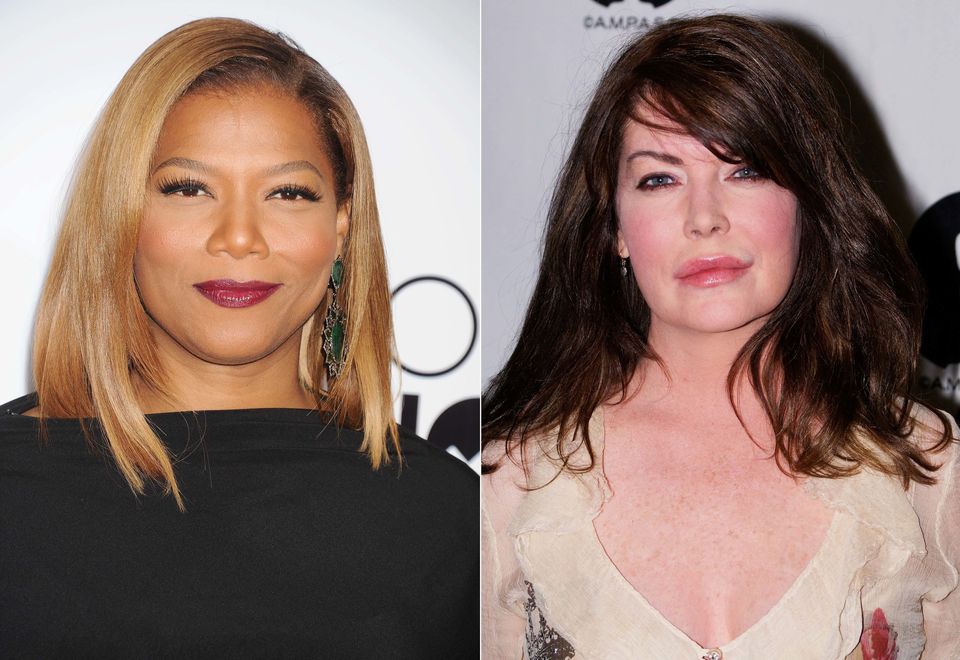 1 / 11
Queen Latifah and Lara Flynn Boyle, 44
Queen Latifah (pictured, left), the multi-talented actress, rapper, producer, and host of The Queen Latifah Show, sports smooth, ageless skin that keeps her looking way younger than her 43 years and won her the role of brand ambassador for Cover Girl makeup. Recent photos of Lara Flynn Boyle (pictured, right), the actress best known for her roles in The Practice and Twin Peaks, showed a blotchy complexion and puffy lips, the source of many rumors and speculation that she has had collagen injections and other cosmetic procedures.
Getty Images