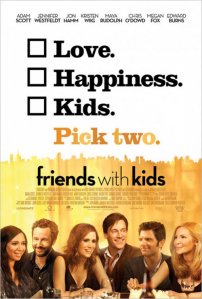 Despite its premise -- a couple of friends decide to have a kid together -- there are lots of reasons to think the movie Friends with Kids would be sympathetic to the childfree.

1) Start with the movie poster: "Love. Happiness. Kids. Pick Two." It's like a childfree slogan.

2) Then watch the first, say, 30 minutes of the film. It starts with a group of six friends meeting at a high-end restaurant, having a grand time and noting disapprovingly that one of the other patrons has brought a kid to a place where kids clearly don't belong.

Jump forward a few years and four of the friends have started having children of their own. The two remaining non-parents of the group watch in dismay as their friends' homes and relationships descend into messy chaos. In one early scene, the two non-parents -- Julie and Jason, platonic best friends -- trek over to have dinner with the rest of the crew at one of the couples' homes, because going out to eat is no longer feasible. The place is a wreck, crying kids interrupt the meal, moms and dads bicker over childcare strategies and responsibilities. The parents feel guilty, while the non-parents feel awkward. It's the most realistic portrayal I've ever seen of how it feels to be a childfree person trying to maintain friendships with busy, stressed-out new parents.

Even after Julie and Jason decide to become parents themselves, the movie still feels childfree-friendly. After seeing how childrearing can mess with marriages, they decide to have a kid together as friends and continue searching for their soulmates separately, so parenting doesn't ruin the prospect of romance. Their pals, of course, think this is a terrible idea, for much the same reasons that many parents tend to think going child-free is a terrible idea: because it's unconventional, because it's not following the rules, because it's not doing the same things they've done.

Here's a bit of dialogue from a scene in which Julie and Jason try to explain their plan to parent friends Leslie and Alex, without insulting Leslie and Alex. This awkward dance might feel familiar to many childfree folks:

Jason: We really want to have a kid. We just don't want to subject that kid to our tragic marriage.

Jason: No, our tragic marriage.

Julie: The one we would have.

And then this scene, with just Leslie and Alex, follows soon after -- again sounding like it could be a disapproving discussion of friends who've chosen to be childfree.

Alex: Why are you so upset?

Leslie: Why? Why? Because it's an affront to us.

Leslie: To all normal people who struggle and make sacrifices and make commitments to make a relationship work. Yes, it's insulting to us specifically, and in general.

It's gratifying to see this on the big screen -- married-with-kids prejudice and defensiveness laid bare, though not unsympathetically.

3) Consider that writer/director/producer/star Jennifer Westfeldt (she of Kissing Jessica Stein) and her significant other and costar Jon Hamm (he of Mad Men) are themselves without child. In a recent profile in the New York Times Magazine, Westfeldt doesn't rule out the possibility of parenthood entirely, but makes the point that she and Hamm, both in their early 40s, are happy with life as it is:

I've thought about this a lot lately. I never thought I'd be this age and not have kids. But my life has also gone in a million ways I never anticipated. ... I kept feeling like I'd wake up with absolute clarity, and I haven't. And we have a pretty great life together. The chance that we'll regret it doesn't seem like a compelling enough reason to do it. I may wake up tomorrow with that lighting bolt, and I'll have to scramble to make it happen. You were wondering how we make [our relationship] work. One way is we're really mobile. No one's had to give up an opportunity they really wanted.

And Westfeldt certainly understands what it's like to be the odd duck out in a group of parent friends. As she recently told NPR:

Over the past five or six years in particular, I've watched a lot of my friends make that profound and enormous transition to parenting. And when you're out of sync with your peer group -- as I have been, since I don't have children -- you definitely do experience ... a mourning, in a way, of what your friendship was before. Because you do lose your friends for a bit, and they don't have the time for you, and you miss them. ...

She says the message she tried to get across in the film is, "Why do we have to do it the same way everyone else does? Why can't we change the rules and beat the system and have it all and redefine the terms?"

What makes Friends with Kids disappointing is that, in the end, our protagonists don't break all the rules. They come around and follow them. It starts when they swiftly dismiss the option of not having kids -- of course they want kids! -- and it continues on from there.

There's one resolutely childfree character in the film -- Mary Jane, Jason's girlfriend. "Honestly, I've just never had the urge, and I love my freedom," she explains. But in her last scene, she's supposed to come across as selfish and pouty -- because she isn't happy about being seated in high-end restaurant next to a family with three squirrelly kids. Overall it's not a terrible portrayal of a childfree person (Mary Jane is played by Megan Fox, so at least she makes the childfree look smokin' hot), but in a movie in which almost everyone is presented sympathetically, M.J. gets the shaft.

Friends with Kids is witty, talky, well-acted, laugh-out-loud funny, tender, touching and full of heart. It's in a different league than your average rom-com, so much so that I almost feel bad calling it a rom-com.

But if you're hoping for a film that actually challenges norms about what it means to be a grownup or a family, you'll be disappointed. On that front, Friends with Kids doesn't manage to break out of the romantic-comedy mold.

This post was originally published on the GINK Think blog.

See more movie reviews from the childfree perspective, of Sex and the City 2 and Eat Pray Love.