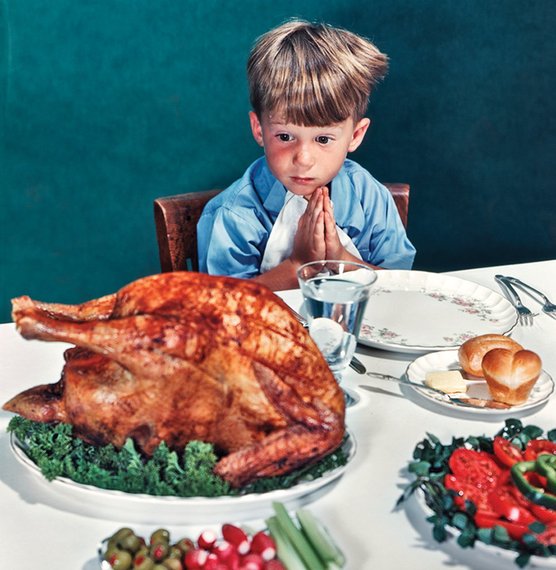 I hate traveling on holidays. Living on the East Coast with all my family in the Midwest, the traveling has always been the worst part of any holiday. To make matters worse, I belong to a clan clustered within a few miles of each other, who are fairly casual about dropping in on one another. I suspect they can't really appreciate the cost and effort of putting in an appearance when you're coming from a thousand miles away. Point being: no one is going to kill the fatted calf for me, and after the horrors of holiday travel I expect nothing less. Instead, after endless delays and disappointments, battling hordes to rival anything in the Lord of the Rings trilogy at three airports over 12 hours, I'm usually greeted with some variation of "Oh, hey, you made it."

So even though Thanksgiving is, hands down, my favorite holiday -- family, feast, football: who could ask for anything more? Seriously, football butts! Plus I don't have to show up bearing gifts -- for 27 nieces and nephews! -- for the last several years I've opted against spending it "back home" in Indiana. And so I'm stuck sorting through Friendsgiving options, when the truth is Friendsgiving can only ever be but a wan, lifeless allusion to that annual extended-family pageant that brings together quite literally every kind of crazy at one table in an orgy of Fox News-fueled inanity that would rend the nation asunder were it not for the steady drip of Tryptophan at the table.

In Boston, where I live now, Friendsgiving is not something folks do in addition to Thanksgiving, but something they do in place of it. Usually foreign students, holed-up PhDs and transplants gather for what is a decidedly decorous affair, with gluten-free and vegan options attendees pretend are palatable, and food-allergy friendly and international dishes that would be considered acts of terrorism on a traditional Thanksgiving table. But no one seems to mind, because it's Friendsgiving. No one even comments on the non-traditional -- dare I say subversive? -- fare. There's an anodyne all-inclusive non-prayer, and painstakingly polite small talk.

Which misses the mark by a mile. Traditional Thanksgiving is anything but Friendsgiving. It is, in fact, one of the only times Americans allow themselves to break bread, literally, with the enemy. This is the true meaning of Thanksgiving, after all. I mean, the first Thanksgiving was basically:

"Thank you for not letting us die."

"Sure, thanks for not killing us."

Thanksgiving brings families together in that same spirit. It's a yearly affirmation that despite our disagreements, we haven't killed each other. Yet. Which is truly something to be thankful for. Plus: yams. Friendsgiving is an obvious FAIL when seen in this light, as it tends to bring together people who have chosen one another, probably because they share some of their foundational assumptions about life, the universe and everything, even though they may have annoying food allergies.

It's precisely the absence of any threat to life and limb that makes Friendsgiving such a FAIL. Because without the ever-looming possibility of anaphylactic shock or your old Drunkle Ed trolling you from across the table, it's just a dinner party, with yams. Friendsgiving: you can be thankful for your friends, obviously, and for the locally sourced, fair-trade, gluten-free artisanal bread you're about to break with them. But Thanksgiving: you may waddle away from the table sure that the Republic is doomed, but we haven't killed each other yet. You may have been THIS CLOSE to strangling Drunkle Ed, but you didn't. And that's something to really be thankful for. Friends come and go, but remember: there's no "unfamily" button on Facebook.

So, I don't know. I might forego the whole affair this year, snuggle on the sofa in my flannels, with that new translation of The Brothers Grimm, eating bonbons and drinking Negroamaro, and thinking how truly grateful I am I don't need that unfriend function on Facebook, and how equally thankful I am from a safe distance that there is no unfamily button.