Two years ago last August my best friend, Terry Braunstein, and I traveled to San Miguel de Allende, Mexico, to celebrate our 50th anniversary of friendship. In this picturesque town of cobblestone streets, colorful Spanish-colonial architecture, wonderful restaurants, tempting shops and perpetual springlike weather, we held each other's arms to keep from slipping down the bumpy lanes, drank margaritas and ate chunky guacamole daily. As we took a hot-air balloon ride over the cloud-strewn hilltops, I couldn't stop marveling at how blessed we were to be best friends after all these years. 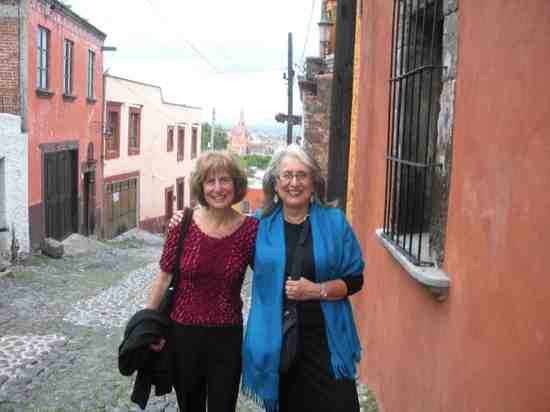 Terry and I were college roommates in Ann Arbor, both of us art students. I introduced her to her future husband, David, the first year she arrived, when my date called to find out if I knew a girl who might like to go out with his roommate. Little did I know what a tall, handsome dude that roommate would turn out to be. Terry took one look, and the rest was destiny.

Nonetheless, I bolted into marriage first, between my sophomore and junior year in college, and moved off campus. Three years and two children later my husband, who had earned his medical degree during the Vietnam War, was commissioned as an officer in the U.S. Navy, and we were dispatched to a hospital ship in Southern California, effectively separating Terry and me for decades. And that's when Terry taught me about friendship: that it can only be nurtured by keeping in touch. We started by writing long, handwritten letters, as people once did. After Terry and David married and had children, we all became like family, despite the distance. They came out to see us at least once a year. We became godparents to each other's kids. We took road trips together in two vans up, down, and across the country.

After many visits and sheaves of letters, Terry and her husband moved to Southern California and we were reunited at last. Although we didn't live in the same city, and our lives were filled to the brim -- I was piecing together teaching and writing gigs, and Terry was a full-time artist -- we would carve out special days to spend together, as we still do -- days when we would do nothing but talk endlessly about life and art, kids and marriage, and all the changes we were going through, some of them exhilarating, others wrenching. We were there for each other when there was no one else to turn to, and became what long-term friends -- and especially women -- have been to each other from time immemorial: an essential support in times of pain and loss, a place of reflection for our hopes and dreams, and a cheering section for each other's successes.

Just as with family, Terry and I have had our share of crossed wires and disappointments. Whatever the problem was, however, neither of us would let the wound fester. We agreed early on to always take the time, as soon as possible after any sour note, to explore what caused the hurt and find a way to mend it.

From time to time, we would put our busy lives on pause and take off on a weekend getaway. Once a number of years ago, on a drive up to Santa Barbara, we saw a quaint little restaurant along the highway, where we located a cozy table on the patio and remarked on how we have always tended to stumble across the best spots when we're together. On that day we happened to notice two nicely dressed older women sitting a few tables away, sipping tea and happily chatting.

"Someday," I said to Terry, "we will be those little old ladies."

"Yes!" she replied enthusiastically, as if she just couldn't wait. "We will."

In some ways, we may be close to that vision already, having reached a place of gratitude that only time can grant, with a deep, joyful appreciation for our lasting friendship. One of the greatest bits of wisdom I have gained along the way is how essential and precious a long-term bond can be and how much poorer my life would have been without having shared it with my very best friend.