I recently met a high school friend after decades. Education, career and family had split us across continents, but the age of communication helped us stay connected through the various milestones of our respective lives. When we met after nearly 25 years, it was as if we had never been apart. I returned home with a throat sore after non-stop chatting, much like we used to back in school.

A couple of years back, I met a person whom I had known through the net. I seemed to have more to talk about to her online than in person. After a couple of hours of labored conversation over coffee, we parted. While we continue our online tete-a-tete with as much verve as before, I doubt if we would meet in person again.

Another "online friend" suddenly disappeared from my online radar. While he appeared active on social networks and such like, he did not return calls, or reply to my emails. I am still raking my head over what I did wrong to have alienated him.

The net offers us an opportunity to know more number of people (without actually needing to "know them"), with very little effort. Sherry Turkle, Professor of Social Studies of Science and Technology at the MIT, believes that the Internet offers us the illusion of "friendship without the demands of companionship". This satisfies the momentary expediencies of modern life in that we get instant attention and are heard at all times, given the pervasiveness of the net over all time zones, and consequently, we are never alone. But is "not being alone" the same as "not being lonely"?

The perception of online friendships and in-real-life ("IRL") friendships seems to depend on the age of the user. While digital immigrants (such as I) subscribe to John Suler's belief that people "separate their online lives from their offline lives", the digital native, growing with Facebook and Instagram finds distinctions between on- and offline friendships more ambiguous. Social network sites have tied digital identity more firmly to the "In real life" iteration.

The Pew Research Center finds that 57% of American teens make new friends online. But, is making friends without seeing them really a digital phenomenon? In the pre-tech era, my high school assigned to each of us a "pen pal" from a different country, and we wrote letters ("snail mail" in digital parlance) to each other. These letters helped us become aware of each other's cultures and lives in times that predated the availability of information at the touch of a glowing screen. So, how is online friendships different from pen-pal friendships of yore?

Considering that I never met my Norwegian pen pal and stopped writing to her in a year, it is obvious that I did not consider her my friend, as against the high school friend mentioned above, with whom I have remained in touch through decades. Pew Research finds that most "digital friendships" stay in the digital space with only 20% of teens having met an online friend in person. Furthermore, it seems that real-time friendships are considered more valuable than digital friendships even among the natives - best friends (or "best friends forever", BFFs as they are referred) meet most often at school and homes, although online meetings come a close third. 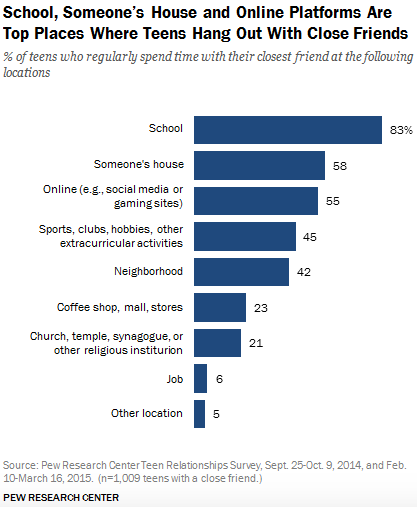 So, is the Internet bad for relationships, as a digital immigrant commonly believes? Apparently not. But for the net, I could have never kept in touch or met my high school friend after a quarter of a century. But even if there is no physical separation, the digital native seems to find online interaction with real-life friends beneficial - 83% of teen social media users believe that social media makes them feel more connected to their friends' lives. 78% of online gaming teens (mostly boys) feel more connected to existing friends with whom they play games. There are people who have admittedly found BFFs or even life partners through the net.

So, is the Internet completely conducive to relationships? At the risk of repeating myself, apparently not. Relationships are largely based on spontaneity and more importantly, honesty - every stumble, hesitation or stutter in a face-to-face conversation reveals our nature in subtle ways, perhaps even without our volition. This honesty makes real-time relationships more trustworthy and hence more permanent. The Internet, on the other hand, affords us the opportunity to edit ourselves and hide behind a screen, so that what-you-see-is-what-you-get may not be a complete picture of ourselves.

Online interactions can also adversely affect existing relationships - 68% of teen social media users report to have experienced drama among their friends on social media and 26% of all teens have had a conflict with a friend over something that happened online or over text messages.

A final biochemical reason that places online friendships below IRL friendships is the absence of physical intimacy. The cuddle hormone, oxytoxin, released during a simple hug can never be released in a facebook "like" or a "{ }" during an online chat. A shoulder on which to cry can never become an equivalent metaphor in the online world, in terms of the comfort it can offer during troubled times.

The digital era is here to stay and pervade all aspects of life. Relationships are no exceptions. The Internet is undoubtedly an invaluable link between people separated by distance. But this link must be built on a stronger foundation of intimacy and familiarity and a balance of online and offline interactions will pave the way to better relationships in the world.

Co-authored by Lakshmi, a Mobicip blogger who occasionally tends to put herself on trial at the intersection of technology, education and parenting.

Mobicip helps parents and schools by way of powerful parental controls for the iPad, iPhone, and other mobile Internet-connected devices. Learn more at www.mobicip.com.