Mexican families will once again be able to reunite at the binational Friendship Park (Parque de la Amistad) on the San Diego - Tijuana border after U.S. Border authorities launched a pilot project on Saturday, the Spanish news agency EFE reports.

In August 1971, first lady Pat Nixon inaugurated the park to allow those unable to join their family members across the U.S. border to see and touch loved ones under the surveillance of Border Patrol. On the day of its inception, the first lady stretched her hand through the barbed wire fence separating the two countries and greeted Mexican residents, a symbolic gesture signaling that one day families would be able to embrace each other without a fence.

In the wake of the 9/11 attacks, a strengthening of homeland security prompted reinforcement of the border and with it a project to install a triple layer fence where families once reunited at the border. In February 2009, U.S. Border Patrol agents denied U.S. citizens access to Friendship Park to start construction on the fence.

“In the process of building the new fence, they really destroyed what has for decades and decades and decades been a place where families have gathered,” Jamie Gates, co-founder of the organization Friends of Frienship Park told KBPS.org on the park’s 4oth anniversary last year.

Since the park's closure, community organization’s like Enrique Morones’ “Angeles de la Frontera” (Border Angels) have been negotiating with border authorities to reopen the area for families.

The new rules set forth by Border Patrol allow groups of ten at a time to approach the fence and speak with their families across the border on Saturdays and Sundays from 10 a.m. to 2 p.m. The park's new fence does not allow minimal physical contact like handshaking and is visually restrictive for visitors.

(Check out video of the new fence above, and pictures of the 2009 fence below)

“I’m very excited to have them close,” Germán Castañeda, who lives on the Tijuana side of the fence told EFE about his children living in San Diego. “I wish they’d get rid of the fences so I could touch my children.”

To enter the park visitors must pay a five dollar entrance fee and the area will continue to be monitored by Border Patrol agents.

“The original meaning of the park endures,” Morones told the Mexican news agency Notimex. “In December we will have a huge cross-border posada (mexican christmas celebration) that will make headlines. We’ve eliminated two of the three fences already and one day we will eliminate the last one.” 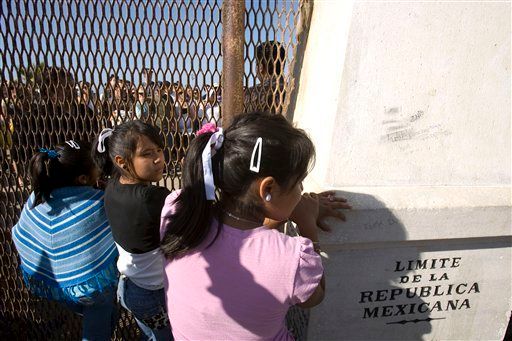